In past posts I've hinted that I'm not afraid to get into the gust of certain radios to do what is referred to as the 'Mars mod'; open the radio up for wide band transmit for use on MARS and SHARES frequencies. To date I've done it on two Icom IC-7100's, two Yaesu FT-891s and, before I got adventurous with a soldering iron, paid to have it done on an Icom IC-7200, a 7300 and a Yaesu FT-991A.

A week ago, as part of my pure fleet initiative, I bought a used IC-7300 from a seller on QRZ.com. I've been haunting various ham radio equipment sale and swap sites for a while now, looking for a good deal on a used 7300, so when this one popped up I grabbed it. Even before I had it in-hand, I was thinking about doing the MARS mod myself. The modification procedures for many HF rigs are available on the internet, and for modern Icom radios it usually means removing a diode from the main board to open up the transmit stage (opening up the receive side is usually not necessary). In the past I used a soldering iron to loosen the solder holding the surface mount diode to the board, and that's a worrisome mix of shaky hands, teeny-tiny closely packed components and a hot soldering iron. But as I was discussing this process a few days ago with my good friend Ken, AI4UW, he asked two key questions: Do you intend to ever re-install the diode? Is the diode in a location you can get to it with a pair of miniature side-cutters? No to the first, yes to the second. Well, he said, just go in with a small set of side cutters and snip it off the board. Just make damned sure you snip the right diode! Ken does high level aviation electronic system repair for Delta Airlines. If you fly Delta into or out of Atlanta, odds are good that Ken has worked on an electronics system on that plane. He knows what he's talking about, so I decided to follow his advice and go the 'snip' route.

I have to say, it was a very simple process, and a lot easier and a lot less anxiety-invoking that trying to remove the diode with a soldering iron. The shears I used were the Crescent miniature wire cutters available from Amazon, Home Depot or Lowes. Because the cutters are angled and ground flat, they can also act as side-cutters, which allows you to get flat to the circuit board when performing this operation. 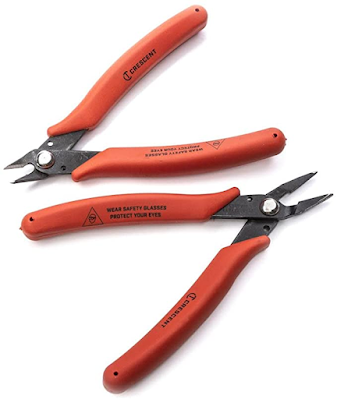 Easy and simple process, yes. But did it work? Have a look:
This gives me two identical high performance HF rigs that can be used across all the Amateur, MARS and SHARES frequencies, and allows me to dedicate a rig for each role. If one fails, the working radio can be easily and quickly re-configured to take over the job of the other. It's a simple configuration file upload from an SD card. I'm happy.
W8BYH out
Posted by Brian at 5:20 AM