The Coronavirus has kept me and the XYL at home for the past few weeks. We're both still working (she's an elementary school teacher) so we stay busy most of the day. The weather here in north-central Georgia has been remarkably gorgeous for most of the past two weeks, with cool temps and clear skies. I know Mother Nature will have her way with us later in the season, but for now it's nice.

However, one does get bored when the job requirements for the day taper off. While I've got a full-up ham shack I can hunker down in to 'play radio', lately I find myself wanting to just sit on the back deck and enjoy the weather, eat lunch, chat with the XYL, wave at the neighbors also practicing social distancing and... play radio.

Normally if I want to play radio on the deck I'm dragging all sorts of crap up from my shack - batteries, radios, tuners, cables, computers, etc. But this week I've been keeping it simple. I've got my Chameleon Antennas vertical set up in the back yard and I keep my CommRadio CTX-10 on the porch. It 'lives' in a small Pelican waterproof case and is easy to pull out and set up in just a few minutes - literally, it takes all of two minutes to get on the air, and that's if I'm moving slow.

What makes the CTX-10 perfect for this situation is it's built-in battery and tuner. If all you want to do is talk on sideband there's no cable mess other than the coax going to the antenna. With a small set of C.Crane's excellent communications earbuds this makes a fun setup. It's so small it doesn't bother the XYL when she's sitting with me out on the deck. 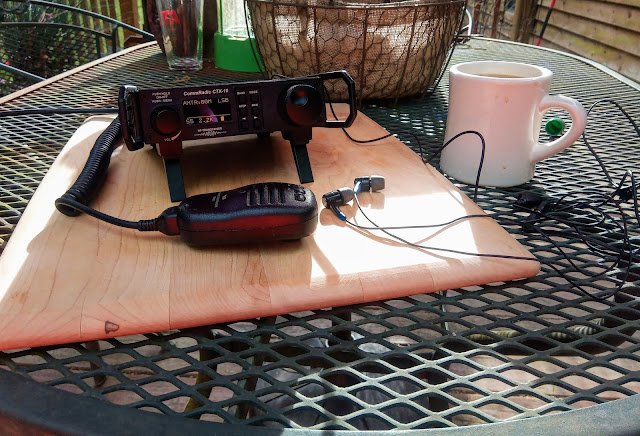 The operating is casual - I'm not working DX. I keep the radio set up throughout the day and when I get a break I'll sit down, turn it on and have a listen on 80 and 40 meters. If something sounds interesting I'll toss out my callsign. For variety I'll tune over to the shortwave bands and try to catch Radio Havana or Brother Stair (where hell does that guy get the money to both pay his lawyers and stay on the air?). The CTX-10 is actually a pretty good all-band receiver.

Next week the weather is supposed to start getting more 'springtime in Georgia'. That means rain, high humidity and higher temps. But for now, it's wonderful on my deck.

Ask folks if they personally know someone who's come down with Coronavirus and most will say no. But that's irrelevant. Mathematical models are showing that if Georgia doesn't get a handle on the rate of infection, every in-patient hospital bed in the state will be occupied by May. So yesterday Georgia's guv ordered the state shut down. Most folks are remarkably accepting of the order, much to my surprise. Even many of the uber libertarian (slash) 'sovereign citizen' types are admitting it might be a good thing to try.

Now there's discussion about the number of hospital beds in the state - do we have enough? Apparently the consensus is, 'no'. Why not? Well, folks I know who track this sort of thing for a living put the blame squarely on Big Medicine. Medical systems like Piedmont Healthcare, Emory, Grady, etc. have been very effective in convincing the Georgia legislature to put laws in-place that squash competition via a very expensive and complex needs assessment process specifically designed to slow or stop hospital construction. Can't have competition now, can we?

Spare me the caterwauling we're hearing from the Left that all of this would have never happened if we just had a single payer/socialized/Canadian-style/whatever-the-hell Venezuela has health system. The problem isn't America's 'unequal' medical system. Compared to most of the rest of the world it's pretty damned equal, and overall the quality of care is far better than many 'westernized' nations. The real problem is a lack of market competition brought on by an unholy trinity of Big Medicine, greedy politicians and crushing regulation. Here's hoping for a post-apocalyptic comeuppance, with reforms that sweep aside the dumb-assed rules intended mostly to keep the other guy out of your market segment.

But we're here for radios. At least I am. Perhaps the greatest radio tragedy to come out of this pandemic is the delay of the release of the new Icom IC-705. Oh, cruel world!

As expected, the 2020 Hamvention in Xenia, Ohio was canceled. Damn. I was actually planning on attending. It would have been my first. Since I've got family in the immediate area it would have made for a great couple of days of family visits and hamfest drooling. Next year, I guess. So I have to wonder what's happening with all of the new product releases. Hamvention traditionally was when the manufacturers did a lot of their annual product reveals. For Icom, the IC-705 was to be one of the stars of the show. But what about Yaesu, Kenwood, Elecraft, MFJ, Xiegu and all the others?

The pandemic is having a real impact on the ham radio dealers here in the US. Since most of the hardware comes out of the Pacific Rim - Japan and China mainly - retailers like HRO and Gigaparts are starting to see real shortages in inventory. I was up at HRO Atlanta just as the virus scare started to ramp up. If you've ever been to an HRO store one of the things that strikes you is the amount of stock they have on hand. Boxes of radios, HTs, amplifiers, power supplies, antenna, etc. stacked everywhere. So many boxes, in fact, that it's often hard to move around the store. This inventory is on-hand mainly to fill internet and phone orders. But two weeks ago there was so little stock in the Atlanta store that you could have held a ballroom dance competition there. Based on what I see on their website things are still not back to normal.


It looks like Yaesu has finally killed off the FT-857. I think it was a mercy killing. This extraordinarily popular mobile 'shack-in-a-box' was introduced back around the Time Of The Mastodons and remained a strong seller. Why kill it off? My suspicion is that parts availability became an issue. But the radio simply was no longer competitive from a technology standpoint. To the end, Yaesu was asking top dollar for the rig AND telling us we needed to pay extra for a TXCO and better filtering. In addition, the front end DSP left a lot to be desired compared to what's available on more current (and cheaper) rigs. The FT-857 form factor was great, it's just that the technology inside the box was badly outdated.

The demise of the FT-857 leaves a market gap that Yaesu has traditionally been very strong in - a truly mobile, rugged, all band radio. The FT-991A, an otherwise great radio, really isn't a 'mobile' rig. Icom doesn't have one either. Their IC-7100 (also a great rig) doesn't really fit the definition of mobile. Portable, yes. Mobile, as in mounted in a car, not really. Here's hoping Yaesu has something waiting in the wings.

But at the end of the day, this forced isolation is actually having a positive impact on Amateur Radio. More people are talking! We hear it on our local repeaters, and I'm hearing it on the HF bands. Maybe it's boredom. Maybe it's a realization that ham radio has a role to play in a world-wide pandemic. Who knows. But more people are on the air, and that's a good thing. So get out there and help warm up the ionosphere!