Late today I got back from the Huntsville (Alabama) Hamfest, billed as the 'World's Friendliest Hamfest'. Not sure just how they measure that, but it really was a friendly bunch at the Von Braun Center.  (And in a town full of PhD's with rocket science degrees, putting a metric to the concept of 'friendliest' should be fairly easy, so we'll let them run with it.) Anyway, this was both my first time at the hamfest and my first time in Huntsville. I drove over from Atlanta on Friday and spent the night in a local hotel, did a few laps around the hamfest this morning and then headed home in the early afternoon.

I really didn't know what to expect of Huntsville. I'd heard mostly good things, but it IS located in Alabama, home of inbred toothless rednecks living in single-wides, driving pickup trucks and singing the unofficial state song that heaps praise on George Wallace. Georgia should be so 'inbred'; I found the part of Alabama I drove through (roughly between Rome, Georgia and Hunstville on secondary roads) to be absolutely delightful. Neat, tidy, quirky in a few places, and just plain charming.

Huntsville was a very pleasant surprise. It was refreshing to be in a city that is absolutely unapologetic about its success (so unlike Atlanta), and in fact celebrates its achievments for the world to see. After all it IS the 'Rocket City', dammit - the city that put men on the moon, shuttles into space and a space station into orbit. A breath of fresh air.

The hamfest itself was very good. The organizing committee does a great job, and one of the big benefits is that all of the boneyard activity takes place indoors, in air conditioned comfort (remember, this is August in Alabama, and today was a 95+ degree day). At most hamfests this is an outdoor activity, and you take what you get, weather-wise.

I did notice a sameness regarding the major vendors. Mostly the same folks you'll see at the Atlanta area hamfests. But that's to be expected since the two cities are so close. One difference was that many of the big manufacturers, particularly Icom and Yaesu, upped their game when it came to their display setups compared to what they normally provide at the Atlanta venues.

A few things of note: 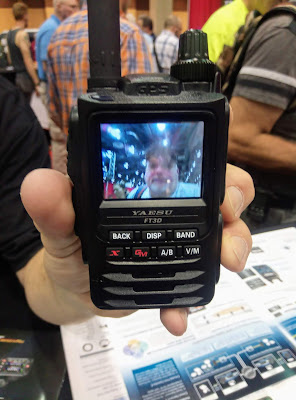 During the show I had the chance to meet some of the HamRadio.World crew - basically the Lea family out of south Florida who are minor celebrities in ham radio. I've been following their adventures for some time now and it was a treat to meet them in the flesh. They already posted a short YouTube video about their trip up to Huntsville (which included fighting with Atlanta traffic on the I-75/85 'connector', a mistake I think they'll avoid next time). It looks like they followed the same route I took from Adairsville, GA, through Rome, GA and then over Lookout Mountain and down into northern Alabama.

And last but not least, it seems like half of my local radio club, the Fayette County Amateur Radio Club was at Huntsville. While we didn't get together for a group picture I ran into Joe, KI4ASK, Ryan, KN4RQL, Dave, AG4ZR, Ross, AJ4P and perhaps one or two others. Maybe next year we should rent a party bus!

Well that's it for my take on Huntsville 2019. All-in-all I had a great time. Some may ask, "Why not more pictures of radios?" Well, I was more interested in talking to people and seeing new things, plus you can get all the pictures you want of all the latest gear at each of the manufacturer's websites. Google is your friend.