Yesterday I was following an Amateur Radio balloon launch event put on by a nearby ham radio club, the Bill Gremillion Memorial Radio Club. The balloon carried an APRS tracker and all flight activity was available on the APRS.fi website. I was reminded just how great a service the APRS.fi site is, and figured it was time to give it some coverage.

When I stepped away from Amateur Radio a little over a decade ago the service known as APRS (Automatic Packet (not Position as many claim) Reporting System was moribund, kept alive by a few true believers. The decline in interest in APRS was due to a number of factors - the general decline in interest in packet radio with its slow AX.25 protocol (which APRS uses), and the kludginess and expense of much of the desktop client software. And then there's the ever present 'shiny new object' factor, so common in ham radio. New things like HF digital modes were becoming extremely popular and started drawing attention away from APRS.

APRS was developed in the 1980s by Bob Bruninga, WB4APR as a real-time local tactical communications system. I won't spend a whole lot of time reviewing the history of APRS, instead I'll let Bob lay it out, in an article he wrote in March of 1999 and updated in 2013.

One of the Achilles heels of APRS in the early years was the lack of good map interfaces. This was long before the availability of on-line services like Google Earth or Google Maps. There was some good client software available, but the map interfaces were either small scale wide area maps, many just roughly georeferenced screen captures, or the user had to buy a third party mapping program. I used the excellent UI-View software published by Roger Barker, G4IDE (SK), but had to purchase a mapping package called Precision Mapping (on CD) produced by a company called Undertow Software for an additional $50. There was a somewhat awkward relationship between UI-View and the Precision Mapping files, but it worked.

Fast forward a decade and things have changed - for the better. One of the things I noticed was the rise of the AX.25 'KISS' protocol. Ham radio manufacturers like Yaesu and Kenwood figured out it was easy and cheap to implement a KISS TNC in their radios, making them APRS ready right out of the box. Sadly, Icom seems to have forgotten about APRS since it developed a slavish devotion to DSTAR and it's 'sorta-like APRS' function known as DPRS.

Next is the development that I think really saved APRS - the excellent APRS.fi website.


APRS.fi was launched in 2006 by Finnish developer Heikki Hannikainen, OH7LZB. APRS.fi uses the Google Maps application programming interface (API) to provide the worldwide map interface, and Heikki built a custom web platform that merges real-time APRS data and high resolution street maps (and satellite imagery), adds some user tools and makes it available freely to the Amateur Rado community. What APRS.fi does is remove the APRS client 'drama' that kept a lot of potential users at arm's length. With APRS.fi, APRS functionality is easily and immediately available on the web, on just about any hardware. If you can get to a web browser you can get to and use the APRS system.

There is a LOT going on behind the curtain with the APRS.fi system, and I'll let Heikki cover it in a presentation he did at the 2012 DCC conference in Atlanta. A bit geeky, but hey, we're all geeks, right?


With APRS.fi and a modern radio such as the Kenwood TH-D74 or the Yaesu FT2DR, which have built-in GPS receivers and APRS-ready KISS TNCs, there's no reason to not get active on APRS. So get out there and get tracking!

Email ThisBlogThis!Share to TwitterShare to FacebookShare to Pinterest
Labels: aprs

I've hinted in this blog - or at least I think I have - that I purchased and I'm testing (a fancy word for 'playing with') a CommRadio CTX-10. 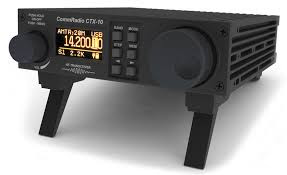 Up to this point I've held off on posting about the radio because it was having some teething issues, and I thought I would wait until CommRadio had a chance to mature the firmware. Well, CommRadio has successfully tackled the biggest firmware issues, so I think it's time for an initial review. Before going forward I also need to state that this radio is not a loaner from CommRadio. It's mine - I purchased it from CommRadio four months ago with the intention of using it, and using it hard, during field operations. The firmware version I tested against is v.1330. For particulars about the radio's features I encourage you to read the CTX-10 spec sheet on CommRadio's website.

First, just what is the CTX-10? The radio is the vision of one man, Don Moore, W0CTX, the owner of CommRadio. Don's background is in aviation communications system design and manufacturing, and as such he has the resources to bring his vision to market. Don saw the need for a small, lightweight, rugged and easy-to-use low power (10 watt) field radio based on SDR technology. Right now the market is flooded with QRP transceivers - the Yaesu FT-818, the Elecraft KX line, the Xiegu X5105, and more. All are good in their own way, but none met Don's vision of ruggedness and simplicity of use, a design that followed the aviation radio concept of 'push the button to talk, let the radio take care of everything else.' As such, the CTX-10 design emphasizes ruggedness and ease of use over a complex set of configurations and controls.


The CTX-10 is not a cheap radio - it clocks in at a penny shy of $1,000, and you still have to provide your own microphone, and sound card modem if you want to work digital modes. Some Amateur Radio operators I've shown the radio to have turned it over and over in their hands and asked, "Is this all you get for a thousand bucks?" I'll admit that at first glance the radio is not all that impressive - a tiny screen, six buttons, a VFO knob and a volume/multi-function knob. On closer inspection you do notice a few external things - the overall quality of construction and light weight. The exterior is a machined magnesium 'box' that is heavily finned for heat dissipation; there is no cooling fan on this radio. The VFO and volume knobs are machined aluminum and the operation is extremely smooth, with no 'wobble'. The rear of the radio is neatly laid out, with each connection port (power input, microphone, mini-USB, 6-pin mini-DIN, CW key, speaker & headset jack) sitting in a very cleanly machined 'well'.


But to appreciate this radio you have to understand what's going on inside the magnesium case, and how it follow's the design philosophy:


I'm no radio construction expert. I can barely solder two wires together and resistors, capacitors, diodes and transistors all look the same to me. I have had the bottom cover off this radio to diagnose an odd rattling sound (turns out it was the glass plate that covers the main display) and everything inside looks neat, tidy and well tied down.

Don has stated that the radio's construction closely follows aviation radio component selection and construction standards for failure-proof operation. The US Federal Aviation Administration is a harsh taskmaster - I know because I work at The World's Busiest Airport and deal with FAA compliance issues every day. I am sure the FAA aviation radio requirements related to reliability are extremely stringent. Don has let those requirements guide the design and construction of the CTX-10.

Back in February Tom Witherspoon, K4SWL, did an excellent review of the CTX-10 on the SWLing.com blog, and that review still stands as the single best evaluation of the radio to date. In the review Tom discussed the radio's strengths and weaknesses. As of the February review the firmware was considered somewhat half-baked. Work still needed to be done to smooth off the rough edges, but the radio showed true potential and promise. There was very little Tom found that could not be fixed in software - it was all just a matter of convincing CommRadio that adding the missing features would not steer the radio away from its design philosophy.

But the SWLing.com review is now somewhat outdated. CommRadio has addressed a number of the issues that Tom identified, particularly the 'accidental on' issue and the lack of split VFOs. Those were addressed in the most recent firmware updates. Unfortunately CommRadio released a firmware update in April (v.1321/1321-1) that introduced some TX audio parameter changes resulting in severe audio clipping and distortion. It took Don several weeks to run the issues to ground, but the most current firmware update, v.1326, seems to have finally fixed those issues. I'm now getting good audio reports.


So how does the radio work in the real world? I try to get it on the air with it several times a week for local and regional nets and rag-chews. The lousy band conditions have not helped, but I find that 10 watts, when the bands cooperate, are enough to get my signal noticed. Of course I can't compete with big gun stations running amplifiers, but from just outside of Atlanta I've been able to reach all over the southeast and as far west as Missouri, using just a simple vertical antenna.

But how about digital modes? Other than running FT8 (which I don't use), CommRadio doesn't provide much information on digital mode configurations. One of the packages I was very interested in testing the CTX-10 with is WinLink. After studying the CTX-10 user manual I discovered that the mini-DIN connection pin configuration was identical to the Yaesu standard. Since I had a SignaLink USB all set up for Yaesu radios I figured I'd give it a try. After a few hiccups I was able to get it working, using the Yaesu FT-891 configuration settings. I still have to set the frequency manually (grrrrr), but everything else works just fine.

So what improvements would I like to see come to the CTX-10? Well, with the understanding that the hardware is pretty much set, it all comes down to software improvements. So here's my wish-list:

But what if CommRadio contemplates a new version, with improved hardware features? That's easy. Here's what would have me gladly shelling out for a new CTX radio:

At the very least, any upgrade to the CTX-10 should include a built-in sound card modem. In today's world of lousy propagation and strong interest in digital modes any radio on the market at the CTX-10's price point should include this feature.

Is the CTX-10 worth the investment? I think so. It's certainly not for everyone (but then, neither is the Flex 6700), but if you operate in the kinds of conditions and situations the radio was designed for - outdoors, in austere conditions - this could very well be the radio you've been waiting for. It deserves serious consideration. How confident am I in this radio? After the last firmware upgrade that fixed the nagging TX audio issues I decided the CTX-10 had reached a state of maturity that allows it to serve as my sole QRP rig. I went ahead and sold my beloved Yaesu FT-817.

This is just the first of what I intend to be a series of posts specifically about the CTX-10. As I gain more experience with the radio I'll put up more posts focusing on specific topics, so stay tuned!

One last note. In most of the pictures I posted my radio is wearing a set of protective brackets manufactured by PortableZero. I highly recommend these brackets, not just for the CTX-10 but for any portable radio you own. They make the rigs easier to manhandle and provide a level of protection for the front dials. I use them not just on my CTX-10, but also on my Yaesu FT-891 and FT-991A. They are not cheap, but they are very, very good.