One of the key issues with the new(ish) Icom IC-705 is that it's designed to be a field /portable radio, yet it's also easily subjected to knocks and bangs in the field. I'm not saying it's a fragile little thing - it's essentially a magnesium 'bucket' inside a tough plastic shell, and all the board mounted components are neatly stacked inside the 'bucket' and are well protected. But the front panel, including the touch sensitive display, is not protected at all. Plus... it's a $1,400 radio, and even if it were made out of ballistic Kevlar it still deserves some protection from rough handling.
But protecting the 705 is a bit of a challenge. We can't simply wrap the radio in another hardened shell, for two reasons. First, the radio relies on ambient cooling. It has no fans or fins. The radio is a cool runner, even on digital modes, but wrapping it up in another enclosure could introduce a heat problem. Next, the radio has a built-in GPS, and the GPS patch antenna can be easily blocked by things outside the rig, like boxes, cases or cages.
For months I've been singing the praises of the Windcamp Ark-705 cage. It's a well designed and built aluminum cage that offers very good protection for the 705. However, it has a serious design flaw - the metal of the top portion of the cage blocks the GPS antenna. I'm not sure just where the GPS antenna sits inside the IC-705, but I have to guess that at the top of the case - that's the only location that makes sense. I've watched the only IC-705 tear-down video available on YouTube several times, but just can't figure out precisely where the GPS antenna is*. Regardless, my testing shows that the Windcamp cage does block GPS signals. Not completely - if you set the radio outdoors beneath an open sky it will eventually achieve GPS lock, but it takes a lot longer than if the radio is sitting 'nekkid'
This discovery caused me to take another look at the Peovi 705 cage. The Peovi 'cage' as originally designed is really just a mounting frame and offers no protection to the rear of the radio. It is well designed and executed, but it falls short of offering any real protection to the radio. I was an early customer of Peovi, buying one fairly soon after they were introduced, but became disenchanted with the lack of protection it offered. It's at this point that I turned to the Windcamp.

But recently, and without any fanfare, Peovi released an add-on for their original cage that ads a bit more wrap-around protection. I first caught hints of it on one of the IC-705 Facebook pages. Called the Full Wrap Protection Add-On Kit, it doesn't really 'wrap around' the radio, but it does offer some bump protection. As they say on late night TV infomercials, "but wait, there's more!". In cooperation with Peovi, Gemsproducts, the company that makes the highly regarded Side KX polycarbonate snap-on covers for the Elecraft KX line of radios, developed a similar cover that fits into the Peovi carry handles and fully protects the front of the radio. The new Peovi add-on protection kit and the Side KX snap-on cover caught my attention and drew me back to the Peovi solution.
I bit the $$$ bullet (add up the pricing for all the components and you'll understand why I use the term 'bit the $$$ bullet') and ordered the full wrap kit and the Side KX cover. They came in a few days ago and I assembled everything and did some testing. I have to say this - the Peovi full wrap kit is very elegantly machined; it's almost a work of art. It offers somewhat less protection to the top and rear of the radio, but as we'll see in a minute that's actually a plus. The Side KX polycarbonate cover is tough - tough to snap in, tough to snap out, and tough enough that I'm convinced you could drop the rig on its face and the cover would fully protect it. You could probably beat the cover with a baseball bat and it would just laugh at you. It's that tough. 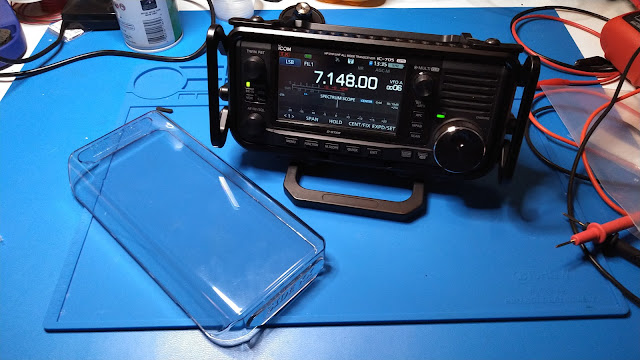 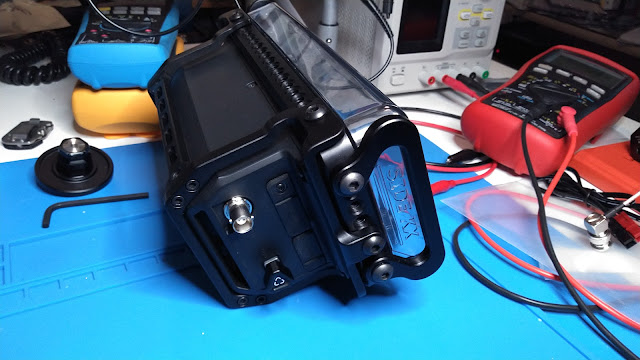 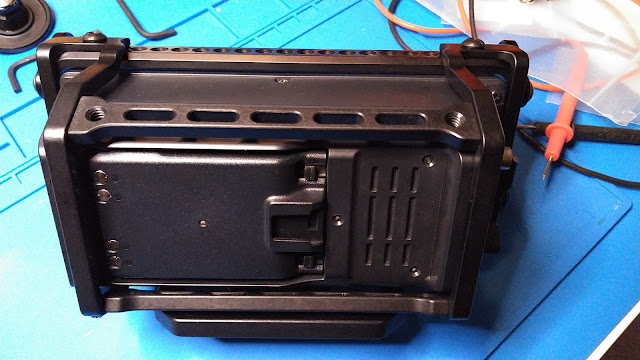 Included with the wrap kit is what looks like a carry handle, but it's actually intended for use as a tilt stand or bale. It works quite well - folds away when not in use, swings out to prop the rig up at an ideal viewing angle when in use.
*So what about GPS reception? Well, while writing this post I was also holding a running conversation on the GPS antenna question with 705 owners over on the IC-705 Groups.io email reflector. Apparently full schematics for this radio have not leaked out (yet), but a few folks commented that the GPS antenna is part of the control head unit (along with the display panel, VFO knob control buttons, etc.). The GPS receiver is integrated into the front panel circuit board, and the antenna is snugged up into a small space between the speaker and Multi knob. If you watch the linked Japanese CQ teardown video and freeze it at the 2:04 mark you'll see the back of the control head showing the circuit board and the antenna (circled below): 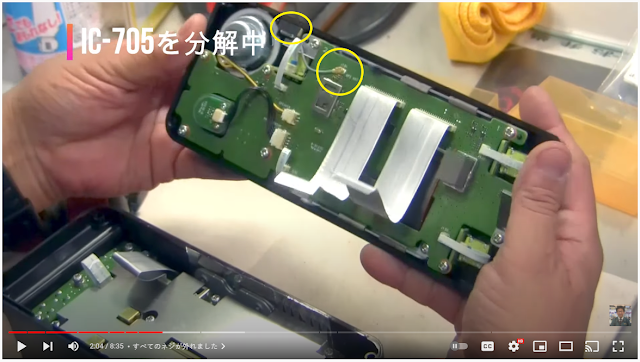 One of the benefits of the Peovi cage seems to be that it interferes less with GPS reception. With the Windcamp cage the 705 rarely established GPS lock indoors, even when near a window. Outdoors the radio, still in the Windcamp cage, would establish a lock but it took several minutes and was easy to lose if you moved the radio. With the Peovi cage, the 705 quickly establishes GPS lock indoors or out, and holds that lock better when the radio is moved around outdoors. If you compare the Windcamp and Peovi cages in the area where the antenna is located there's not a whole lot of difference in the amount of metal. But the difference is just enough - the little extra metal in the Windcamp cage definitely interferes with reception.
So going forward I'll be using and testing the Peovi cage, and I'll report back time-to-time. Stay tuned!
W8BYH out
Posted by Brian at 9:47 PM No comments: