A week ago I published a post titled The IC-705 Reassessed, where I pulled back my previous endorsement of the IC-705 due to the often crippling RFI issues. I linked my post to the most active IC-705 Facebook page and, as anyone with experience with Facebook can guess, the flamers and the tolls crept out of the shadows and accused me of everything from exhibiting signs of advanced dementia to criminal-level stupidity when it comes to my ability to investigate and mitigate RFI.

I knew it would happen, and I enjoyed the repartee.

But I also thought I'd give Icom a chance to respond to the issue, so I sent them a tech support request through their website:

"Dear Icom, I have a problem with RFI over what I suspect is the USB connection that is nearly impossible to mitigate. The issue exists for both the battery charging over USB connection and USB rig control. I've tested with a variety of USB cables, all heavily 'choked' using ferrite cores, and tested with a small group of Windows 10 laptops and tablets. The RFI, particularly on digital modes, overwhelms the rig. The problem exists on 20, 40 & 80 meters, but seems worse on the lower bands. Has Icom worked out any mitigation strategies for this issue?"

Here's the response I got from Icom USA: 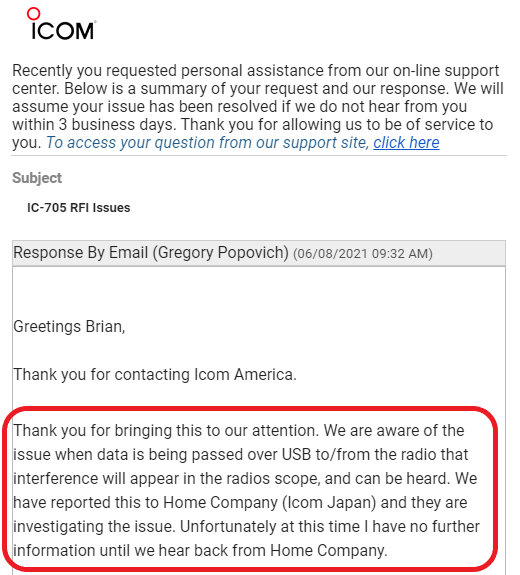 I have a lot of confidence that Icom will get this fixed. The IC-705 is a flagship product in Icom's Amateur Radio lineup, and the rig has the potential for a very long (and very profitable) production run, so Icom knows they have to get this right. I think my biggest fear is that the RFI issue isn't one that can be addressed in firmware, and IC-705 owners will have to send their rigs back to Icom for board-level work.

I intend to 'poke' Icom USA on this at regular intervals, so stay tuned.

Two months ago I wrote an initial review of the IC-705, giving it all-around high praise.

Today I have to pull back on that somewhat slobbering fanboy of a review, and remove the IC-705 from my 'recommended' list. The radio has a major, and crippling, RFI issue if you want to run it on digital modes over USB under field conditions.

Simply put, the induced or coupled RF noise picked up by the USB cable floods the rig with RFI. We are talking noise and hash from one end of the band to the other, and the noise gets worse if the software you are running, like Winlink, initiates a command dialog with the radio (in Winlink, that's referred to as 'starting a session'). And it's a complex issue. It's not simply USB line coupling, or laptop interference, or antenna location. It seems to be a sensitive interplay of all three. You can never really be sure what the real root of the problem is. The one key factor, however (based on my testing) seems to be antenna location. The further away your antenna, the less of a problem you will have.

I didn't notice this issue when I did my first post back in March because I hadn't run the IC-705 in a portable (field) environment. All my testing was done in my shack, where my antenna is 75 feet away on the other side of my house. Operating this way, the radio is a champ on digital modes, and that's how I wrote it up in my March review. But a week later I set the radio up at a local park using my Chameleon vertical antenna and the same laptop I use in my shack, and that's when I discovered the noise. I've since had the rig in the field twice more, testing with various antenna setups - a mag loop and an EFLW - and the problem is always present.

Here's a video I made while using the IC-705 and my Chameleon mag loop antenna a few weeks ago during a POTA activation:

Now, this RFI problem is not unique to me, or to my radio. I have three friends in my local Amateur Radio club who own IC-705's and they report the same issue. If you go to the IC-705 Facebook page or the IC-705 Groups.io email reflector you'll find plenty of discussions on this issue. Of course the fanboys will crawl out of the woodwork and tell you you're not keeping enough cable separation, or you are using the wrong type of USB cable, or you've got a 'noisy' laptop, or you are not using enough chokes, or the solar flux-to-ground coupling ratio is too low, or some such bullshit. I have tried every reasonable fix for this issue. I've tested against multiple laptops and Windows 10 tablets, I've tried a wide variety of heavily choked USB cables. I have enough common mode chokes attached to the feedlines to soak up a nuclear-level EMP. Nothing fixes the problem entirely - the 'hash' is always there at some level.

As I mentioned above, the one big delta - the variable that seems to provide the best mitigation - is antenna location. All things being equal - the same radio, laptop, USB cable, feedline chokes and antenna design (EFLW) - at home I get virtually no noise or hash when running digital modes, in the field the radio is overwhelmed by RFI.

The IC-705 was specifically designed for portable field use, and that's how Icom markets it. The owner has a right to expect that the radio will work in the field, on all modes, with a less-than-ideal antenna and cabling setup. The expectation shouldn't be that the owner has to schlepp around 75' of coax and enough iron ferrite (in the form of chokes) to sink sink a small boat, just to send a Winlink message.

Because of this last bullet point, I no longer recommend the IC-705.
This RFI issue is Icom's to address and fix. Frankly, I'm surprised this issue wasn't caught by Icom in testing, and I'm disappointed that the ARRL test lab didn't catch is in its otherwise outstanding review of the radio.
There's more to come on this RFI problem. Right now I'm focusing on the radio's wi-fi connectivity feature as a solution, but I'm still testing and evaluating. So stay tuned for an update on the 705 saga!
W8BYH out
Posted by Brian at 8:15 AM 6 comments:

Email ThisBlogThis!Share to TwitterShare to FacebookShare to Pinterest
Labels: 705, winlink

It's June 1st - You Know What That Means! 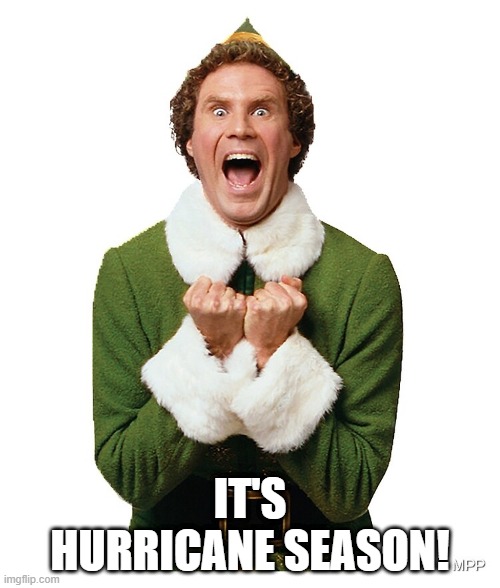 I get almost as excited about the opening of hurricane season as I do about Christmas. For those of us who live 'on the corner' (on the corner of the southeast US) - Florida & Georgia - we are prone to get hammered by both Atlantic basin storms, and Gulf of Mexico storms. It's inevitable. Set your watch by it. Then toss in the southeastern 'tornado alley' that stretches across northern & central Georgia, and this state gets some complex and dangerous weather from March through September.
So 'Jawjah', get your emergency radios and flashlights ready, go buy a couple dozen spare batteries, keep your phones charged, your gas tanks full, and keep your weather eye on the horizon.
Because it's coming. Maybe not this year, or next, but it's coming. 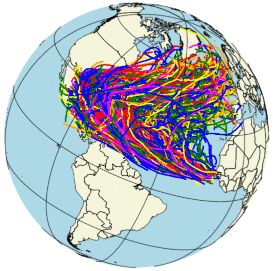 And on that cheerful note...
W8BYH out
Posted by Brian at 8:20 AM No comments: