A Ham Shack On Wheels

A few weeks ago my wife and I did something we've been talking about for years - we went out and bought a camper.

This is a first for both of us. I spent 23 years 'camping' with the US Army and did more than my fair share of time sleeping in mud, dust, freezing rain and 100 degree heat, eating out of cans and plastic pouches, drinking gritty coffee, showering once a week, shaving out of a helmet (yes Virginia, we really did shave out of our helmets - the old 2-piece 'steel pots', not the newer Kevlar noggin' protectors) and generally getting my fill of 'roughing it'. I told The Missus that the next time I go camping, it'll be with air conditioning, a shower and a flush toilet. She didn't argue. 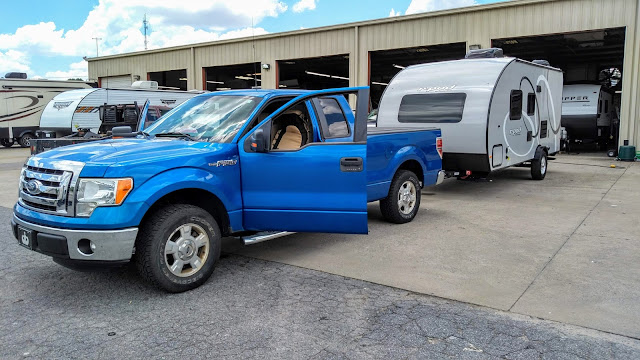 And of course, being the devious SOB that I am, I viewed the camper as something of a rolling ham shack. In fact, I just spent Field Day 2020 operating out of it while it was parked in my driveway. 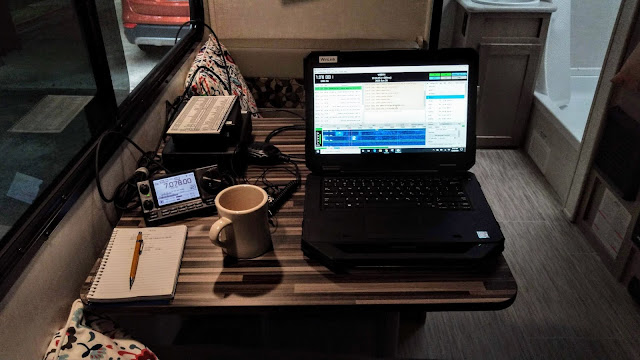 In buying the camper we learned the four universal truths about RVs:

Also, the 'black water tank dump' ritual seems specifically designed to remind you why we need to appreciate modern plumbing and sewage treatment. Nothing like having to flush your own poop out of a holding tank to remind you why we're a first world country and those without working sewage systems are third world countries. Yummy.

Other than gaining a mobile ham shack, there are other benefits. For example, that air conditioner circuit thing. Once we figured out that running the AC on a household circuit was a no-go we realized a generator was in order. Gee, imagine that - a ham radio guy being forced to buy a generator. Go ahead, twist my arm.

But I was also forced into the realization that ham radio in a small RV takes up too much space, if you are thinking conventionally. The picture above shows my Icom IC-7100 set up along with my laptop. That left my wife barely enough table space to put down a cup of coffe. Suddenly something like the old Yaesu FT-857D is looking pretty good for this type of activity. What this world needs is a small form factor all-mode/all-band radio with a built-in sound card interface and tuner. But where to shave weight and size? Simple - make it a 20 watt rig. Yaesu? Icom? Bueller?

So stay tuned for more adventures from the mobile ham shack. I'm not sure where this will all lead, but I'm sure it'll be an interesting trip!

The Icom IC-705 is still weeks (months? years?) away from release in the US. Out of frustration I bough a Yaesu FT-818 after swearing I'd never again invest in 'new' old technology. But dammit, the radio just works. Yaesu recently killed off their generally excellent (but also dated) FT-857, and apparently has nothing in the pipeline to replace it. C'mon Yaesu, get your head out of your ass the System Fusion hole and get to work. Rugged mobile HF radios were once your forte. Today, you're merely an also-ran in a market full of also-rans. The new(ish) Yaesu FT-891 was supposed to knock one out of the park, but instead has all the shortcomings of a radio specifically designed to NOT compete with other Yaesu radios. Plus, it generates so much phase noise that it set off the radiation alarms in the ARRL test lab (just kidding - but only a bit).

The CommRadio CTX-10 is still having teething problems. Elecraft's KX line is looking older every day. The Xiegu X5105 looks interesting, but I need something with a little more 'oomph' than just 5 watts (plus it may, or may not, be out of production, depending which website you read). The 20 watt Xiegu G90, the hot new 'it-girl' in QRP, was just rated by the ARRL as one of the most 'splattering' radios on the market today, beating out the reigning splatter champ, the Yaesu FT-891. The 599 Labs Discovery radio is a year overdue and is looking more and more like vaporware.

It seems in the near term I'm stuck with schlepping one of my full-sized radios to the field - radios like the Yaesu FT-991A or the Icom IC-7200. Both are very good radios, but physically they are larger than what I want for portable use. Plus, I'm really interested in a radio with an output between 10 - 20 watts for EMCOMM work.

There's a guy over on the Icom IC-705 Facebook page (yes, a not-yet released radio has its own Facebook page, and it has a LOT of followers) that keeps getting beat down for asking questions about the 705's ability to withstand weather, dust and rough handling. Yet the guy asks very valid questions. Icom is marketing this as an 'outdoors' radio, and the consumer has every right to expect some level of envionmental protection. Alas, Icom remains silent on the issue, which raises everyone's suspicions.

All this has me wondering, just what the hell is going on in the ham radio market today?! We've traded tough, rugged, simple but effective radios like the Yaesu FT-897 or the Icom IC-7200 - radios built to take a bit of outdoor abuse - for a bunch of effite "Please don't take me out in the high humidity" shack queens that have more bells, whistles and menu options than the International Space Station. And the structural integrity of a soup strainer.

All I ask for is a simple all-mode HF-only rig that puts out 20 watts, has a built-in tuner and sound card interface and is built to MIL-STD-810 environmental standards.

Oh wait, there's already one on the market. Now where'd I put that spare $20k?