When Does Obsolete Become Collectible?

I just tossed another penny into my coffee can labeled 'IC-705 Fund' and noted the coin level is still well below the half-full mark. I suddenly realized that I'll need to keep my Yaesu FT-818 up and running for a few more months yet. It's a radio I love to hate. But that's OK. It's paid for, and it gives me something to gripe about.

At least the 818 has the factory TXCO and CAT control. I may install one of those cheap Chinese 2.7 kHz ceramic SSB filters just to see how it works (the factory Collins crystal filters are just too expensive to justify paying for). I've got a Windcamp LiPo battery setup on the way (I think there's a Chinese courier walking it here from Hong Kong, based on the shipping tracking). Hopefully this addresses my single biggest complaint about the radio - it's gawd awful power management system.

As I turn the little radio over and over in my hands I'm struck by a few things. First, the overall design. Twenty years after its introduction, it is still very compelling. I believe it represents Yaesu's early 21st century product design capabilities at their best. This radio was designed at at time when Yaesu was pushing out a whole series of innovative products like the FT-897, with it's 'sidecar' tuner, internal batteries and rugged, weatherproof design, the FT-857, a 100 watt HF/VHF/UHF all-mode rig no bigger than the 2 meter-only mobile rigs on the market at the time, or Yaesu's line of miniature handhelds (the VX series) that offered an IP67 rating before IP ratings even existed. These radios were never quite as polished as the rigs manufactured by Kenwood or Icom - they always had a few rough edges - but dang, they worked, and worked well.

Yaesu has killed off the FT-897 and 857, and most of their VX line. Only the FT-818 remains as part of that early century spurt of all-band/all-mode, mobile/portable rig development, with its focus on outdoor activity. I think it's fascinating to think of how the 818 will be viewed come mid-century. Will it be ignored or dismissed as an archaic piece of technology with no appeal. Or, will it be a highly desired collectible, with hams paying ridiculous prices for good working examples?

My guess is that, when the 818 goes out of production, for a time it'll be a forgotten radio. After all, there'll be plenty of other products in the same market segment that perform better (the IC-705 is only the first of a line of all band/all mode QRP rigs that are poised to sweep the market). Hams are like crows - the are attracted to shiny objects, and rigs like the IC-705 are the new shiny objects. Then after a period of time, maybe 5 years, maybe less, Amateur Radio will re-discover the FT-817/818. By that time it's shortcomings will be seen as just quirks that give the little rig 'character'. In much the same way that nobody complains these days that Collins S-line gear can be a little drifty, nobody will much care that the 817/818 doesn't have any effective noise reduction, or digital filtering, or that it lacks a built-in soundcard interface or tuner, or that the power management system must have been designed by a first year EE student attending a third tier technical college. All of those rough edges will fade away in memory, and the FT-817 & 818 will suddenly become 'cool', and collectible.

And hams around the world will get all nostalgic and weepy-eyed when you say the words 'Yaesu FT-817'.

I'm a huge fan of history, particularly WWII history. America was never better, never lived her ideals more fully, than when she sent millions of her sons and daughters out to liberate the world. From the Japanese home islands to the Elbe River in Germany, America, along with her allies, stepped into the breach and stopped tyranny in its tracks.

Until late 1943, the ultimate outcome was not a sure thing. Until then, the war was the Allies' to lose. Our enemies were smart, well trained, experienced, well equipped and motivated. All we could do was hold in some areas, nibble away at the enemy in others, play for time, gather our resources, and wait for the right opportunities.

Immediately after Pearl Harbor, America found it relatively easy to turn on the industrial production tap. War materiel began to flow from our factories and shipyards in staggering and ever increasing volumes. But the one thing we couldn't manufacture was men. America's entry into the war created an immediate manpower crisis. There simply were not enough bodies to fill the military drafts, the factories, the farms and the shipyards, to man the merchant fleets, to build the training camps, to operate the railroads, the ammunition plants, the steel mills. To take pressure off of the manpower demands, all services, the Army, Navy, Marines, and the Coast Guard, were forced to do something they had never done before - integrate women into key roles.

Of course we've all heard the stories of women in uniform serving as nurses, medical technicians, clerks and secretaries, as aircraft ferry pilots, as switchboard operators, vehicle drivers, statisticians.

And, of course, thousands of women in all services were trained as radio operators and were taught Morse code. They served in a huge variety of communication roles - as radio watch officers listening for any hint of enemy submarine activity, manning air traffic control networks across the country, coordinating coastal ship movements, sending critical command and control messages across the vast open spaces of the Atlantic and Pacific. Most of this radio traffic was routine and boring, but all too often these operators had a front-row seat to the realities of war: Atlantic convoys reporting their desperate attempts to shake off the attacking U-Boat wolfpacks, merchant ships calling for help while being torn apart by fierce North Atlantic storms, aircraft lost in heavy fog and searching for a safe place to set down, or tiny Pacific islands reporting the sudden appearance of Japanese landing forces, and sending what the operators on both ends of the conversation know will likely be the last transmission.

A few days ago I stumbled on this poster done by John Falter, a famous illustrator who, before the war, was known for his advertising work and magazine covers. He was commissioned a lieutenant in the US Navy Reserves and did a series of well known recruiting and motivational posters. While I've seen and admired a lot of Falter's work, I don't remember ever seeing this poster until just recently. Falter painted it in 1942, when America was still reeling from the attack on Pearl Harbor, and the Japanese and Germans were still moving from victory to victory. Our enemies seemed unstoppable and, for a time, they were. From the American perspective, everything was in doubt, nothing was certain, and we were suffering setbacks on every front.

In this poster, Falter beautifully and poignantly captures the seriousness and reality of the time. It isn't the all-too-familiar and jaunty 'Join The Navy And See The World!' recruiting poster. This poster says, "We need you. We need you for serious, demanding, and often heartbreaking work."

The headphones are in place, her hand is on the key. She's listening intently. There's a look of concern, almost fear, in her eyes. Is it an Allied convoy under attack? An aircraft pilot desperately trying to land? A Navy ship that's not answering the call? 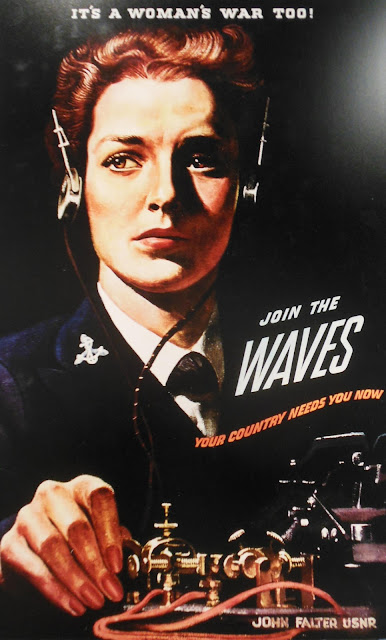 Every Amateur Radio operator needs a multimeter. Or two. Or a bunch...

OK, it looks like I went overboard here, and maybe I have. But believe it or not, with one or two exceptions these meters all get used fairly regularly. It mostly depends on the type of work I'm doing. Whether it's on my bench, on electrical projects around the house, or in the field.

A digital multimeter is a fundamental tool in Amateur Radio. Every ham needs one for basic test functions like checking continuity on a length of coax, testing DC voltage on a battery, checking resistance on radio components, checking AC voltage at a Field Day site, etc. Think of a digital multimeter as an electronic 'Swiss Army knife'.

Some more esoteric tests that a multimeter can help with (assuming the meter has the feature) is AC frequency, capacitance, current draw in amps, component temperature, min & max reading values, non-contact sensing of live circuits, and more. So a modern multimeter is less a 'meter' and more a snapshot test instrument (as opposed to an oscilloscope, which is a time-based test instrument).

I blame my fascination with multimeters on this guy: 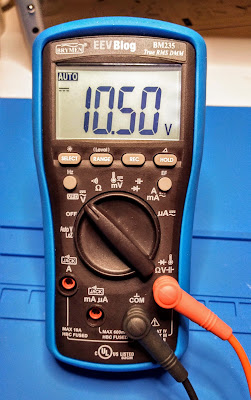