The Radio As A System

A few days ago I was updating my Christmas wish list and decided I'd ask Santa for an AN/PRC-160 manpack radio - better known as the Harris Falcon III wide-band HF manpack radio. In concept this is a direct descendant of the PRC-77, so why wouldn't I want one?


I managed to find a copy of the GSA price sheet for the Falcon III and its components and two things struck me. First, this radio is jaw droppingly expensive. A well outfitted 20 watt configuration costs about as much as a new sub-compact sedan. Second, Harris offers one heck of a lot of components for the Falcon III. The component list is 8 1/2 pages long, and it's in small type. In fact, the Falcon III really isn't a radio, it's a system of components that make up various radio configurations. You buy the basic transceiver and then select the components needed to fit the intended use or mission. Going to use it as a manpack radio? Order the battery case, whip antenna and carrying pack. Going to use it mounted in your HMMWV? Order the vehicle installation kit, vehicle antenna mounting kit, antenna tuner and amplifier. Not sure exactly how you will use it? Then order the whole shebang and pray your Powerball numbers hit.

The same approach applies to Amateur Radio. An Amateur Radio transceiver should be thought of as a component of a system. The radio may be the key component, but by itself isn't much use. Only when you mate the radio with carefully selected components does it live up to its full potential. YouTube is full of radio fanboys appearing in silly and useless videos of themselves unboxing their new toys, showing the radio, the accessories, the manuals. What few do is go on to describe all the components that are necessary to make their new toy work: power supplies, antennas, headsets, cables, programming software, rig control software, the computers to run it all on. Minor stuff like that.


I recently purchased a Yaesu FT-991A to use as the centerpiece of an all-mode portable station. I wanted something that was highly capable on both voice and digital modes yet is a small and easily transported package. The 991A seems to fit the bill nicely, but for for even the most basic operations it needs to be connected to a power source and an antenna. That's just to get a voice signal out. Taking advantage of the 991A's full potential requires a wide range of additional components that extend the radio's capabilities and add flexibility to its operating modes.


But what components to buy? To determine that we first start with what I call 'deployment scenarios' - how do you intend to use the radio? My deployment scenarios focus on what I refer to as communications dominance in an austere environment. That is, in an emergency situation, the ability to get a signal through regardless of band conditions and using all available frequencies and modes. This implies the ability to use voice and digital communications on HF, VHF and UHF on the allocated Amateur and MARS frequencies, and the ability to receive across a broad spectrum to monitor commercial and government broadcast systems.

The FT-991A is not best-in-class when it comes to pure transmit and receive performance but it is very near the top of its class, and its all-mode versatility is unmatched. This makes it an ideal radio around which I can build a very capable system. But what additional components do I need? Let's look at the basic requirements that need to be met to achieve communications dominance:

Operating in high noise environments: a headset/boom mic combo and hand switch. I find operating VOX to be annoying, and it can be hard to adjust in noisy environments, so I depend on a hand switch

Antennas: antenna systems need to be versatile, easy to transport and offer good performance. For HF I've settled on a combination of  both a ground mounted vertical and and end-fed wire, and for VHF/UHF a simple but extremely effective weather proof j-pole. Antennas are useless without coax cable to hook them to the radio, so I have 2 x 100' lengths of RG-8X coax. There will also be scenarios where you need to hoist these antenna components into trees or other supporting structures, so I've added 200' of 550 parachute cord and line-launching slingshot

TNC: the FT-991A comes with a built-in sound card modem for use on digital modes on HF, but lacks a TNC capability for Winlink or packet digital modes on VHF. This means a separate external TNC

Computer: in this 'communications dominance' scenario the computer must be as rugged/survivable as the radio itself. Because of software requirements it also needs to be a Windows system. Fldigi and Winlink are low system demand applications; they can run just fine on a fairly pedestrian Intel i5 system. Any $300 Wal-Mart laptop could work, but this scenario calls for a computer with above average survivability - something that can take some bumps, knocks and a bit of water. I've actually addressed this issue in a previous post, so check there for more info

Transport: cardboard boxes are a lousy way to transport sensitive electronics gear, even if it is ruggedized. The goal is safe, secure and watertight transport for all system components. It is unreasonable to expect every component to fit into a single case, so what I've done is separated components out by function. The FT-991A and it's key components (power cables, power supply, coax jumpers, headset/boom mic, manuals, etc.) go in one case, antennas and accessories go into another case. Outsized components like vertical antenna sections go in their own custom built transport tubes. Long lengths of coax go into a heavy duty canvas carry tote

One of the great things about being a long-time ham is that I've got most of this stuff already laying around. The only thing I needed to purchase new was a TNC (I went with a Coastal Chipworks TNC-X) and programming software from RT Systems. I'm not sure if this indicates I'm very well prepared, or if I spend too much money on radio gear. Or both. 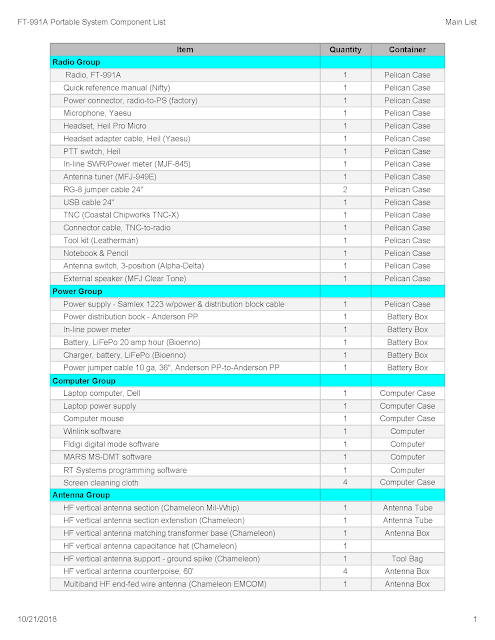 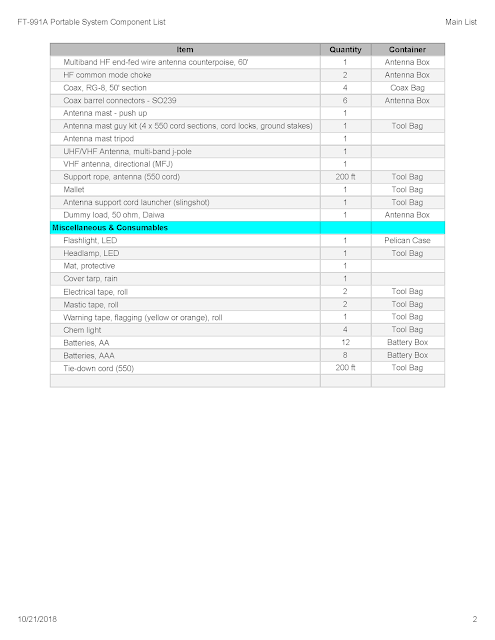 I don't see it that way. I spent decades in the US Army managing systems - from simple truck tool kits at the squad level to the fielding of complex information analysis systems across the entire European theater of operations. I have deep experience in building out system components to meet specific mission requirements. If this mission is communications dominance across a variety of operating modes and conditions on the Amateur Radio bands then this system equipment list is the minimum  you will need.

So if you are involved at any level with ARES, SHARES, SATERN, or any of the other Amateur Radio groups that provide emergency communications support start thinking of your radio(s) as part of a system, then build out the system to meet your most likely deployment scenario. Remember, when you deploy don't deploy with a radio, deploy with a system.