It's rare that I praise the US federal government. I take the view that the least government is the best, and the only way you could use the word 'least' in describing what we've got here in the good old USofA is 'least effective'. But occasionally they get things right. NASA did a pretty good job with the Apollo moon missions, and the Coast Guard does a good job of keeping pirates from raiding our shores. And back in 2016 the Department of Homeland Security released to the public a neat little document called the National Interoperablility Field Operation Guide version 1.6.1. Or as the Amateur Radio community calls it, the NIFOG. 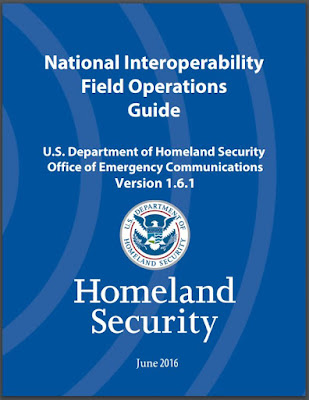 What is the NIFOG? I'll just quote from the document's introduction:

"The National Interoperability Field Operations Guide (NIFOG) is a technical reference for emergency communications planning and for radio technicians responsible for radios that will be used in disaster response."

In its original format the NIFOG is a pocket-sized guide chock full of extremely useful information that every emergency communicator will need access to in times of real emergency: 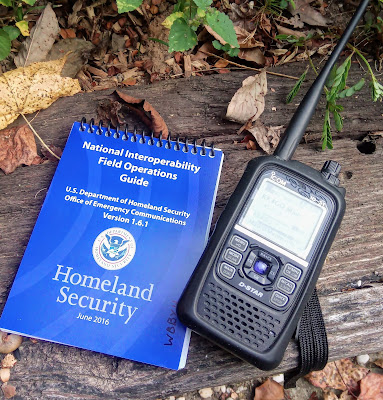 Homeland Security makes the NIFOG available in a digital (PDF) and hardcopy format. While the PDF version is easy to get and have available on your computer, I strongly recommend everyone involved with emergency communications get the hard copy version from the US Government Bookstore. It's a pocket sized, spiral bound, waterproof booklet that should be a part of your Go-Kit. Get a copy, take the time to review and understand its contents and bookmark so you can quickly find the relevant sections. Like so many things disaster response related, the worst time to try to become familiar with the NIFOG is when a hurricane is bearing down on your county.

Here's a short video covering the NIFOG (version 1.4) contents. It has a bit of a 'prepper' bent, and the guy who made the video can be a little crude, but he knows what he's talking about. His day job is managing field communications systems for the US Forest Service, and he has published a number of videos on communications support during wildfires.

So get the NIFOG, familiarize yourself with it and always have a copy with you when you deploy. That's an order!

A Shot Over The Bow

A few days ago, at the Tokyo Hamfest, Icom officially announced their new Icom IC-705 portable radio. Notice I said portable, not mobile. It seems this radio is specifically designed to be taken to the field and used in remote places, not chauffeured around in your car. 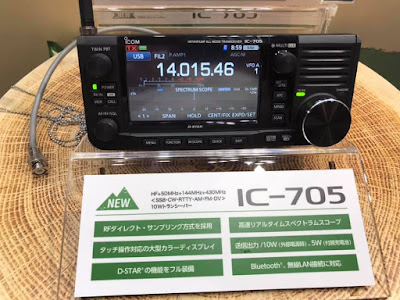 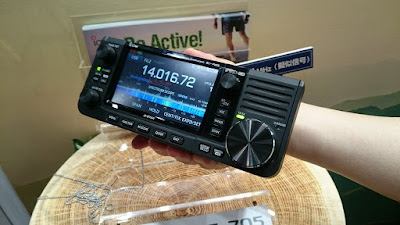 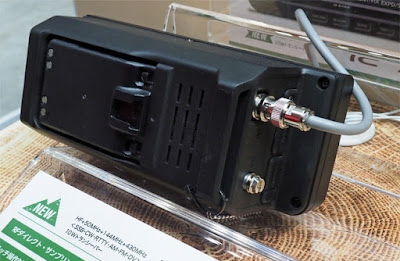 Even though the radio was announced just a few days ago the buzz and spin on the internet is at hurricane levels. The responses are either that Icom knocked it out of the park with this radio, or that Icom blew a golden opportunity because of some missing feature(s) or design elements.

This is all based just on speculation and the little information that was released at the Tokyo Hamfest, but we can do some informed speculation based on what we already know, and we can do that because Icom has wisely based this new radio on the proven SDR technology in the hugely popular IC-7300 (which I own and use almost daily).

If we simply take in the known features we get a sense of where this radio is heading:

There are a few things we have to infer given Icom's recent past history with HF radios:

What we do know for sure is that this radio will not have a built-in tuner. While I'm OK with that, I do think it's a serious hiccup on Icom's part. C'mon Icom, if CommRadio can shoehorn a very capable internal tuner into their smaller and lighter CTX-10 then you can do it with this radio. Yes, of course LDG will be right along with a battery powered IC-705 specific tuner, but an internal one is still something very desirable in a portable rig. And spare me the "just use a resonant antenna" crap. This is the real world, and the real world is full of non-resonant or 'almost-but-not-quite-resonant' antennas, and a tuner provides frequency agility and can make portable operation so much more enjoyable.

A few things I saw in the Icom product brochure that caught my eye include:


Who is this radio really aimed at? Well first, guys like me who love operating portable. To me hauling a radio to the woods is one of the more enjoyable pastimes in ham radio. And the term 'guys like me' also includes folks who like to do Parks On The Air (POTA), Summits On The Air (SOTA), Islands On The Air (IOTA), and folks who like to do manpack mobile HF (the aforementioned HFPack crowd). There's a huge ready made market for this radio, and if it's a success it'll just draw more operators to these activities.

But this radio is also Icom's shot across the bow of their competitors in this market space, particularly Elecraft, Yaesu and the rising tide of Chinese manufacturers who are coming on strong with offerings like the Xiegu X5105 and the G90. Elecraft and Yaesu in particular have to be sitting up and taking notice. This radio is aimed squarely at the Elecraft KX3, and the IC-705 will certainly give that radio a run for the money, particularly if Icom can bring it in at a low enough cost (below $1,000 street price).

Yaesu has been resting on its laurels in the portable radio world for decades. Its FT-818 and FT-857 designs are ancient by comparison, and Yaesu muffed the design of the FT-891 so badly (discussed in an earlier blog post) that it had to slash the street pricing drastically to get over the bad press. The FT-891 doesn't reflect just a bad design, but also a missed opportunity. The FT-891 was designed specifically to NOT impact sales of the older FT-857 or the new FT-991. As a result Yaesu ended up with a radio full of compromises, not innovative features. Here's hoping the Icom IC-705 forces Yaesu off of their rear ends so that next year at the Tokyo Hamfest we'll be talking about Yaesu's new innovative HF/50/2 meter/70 cm offering.

Regardless, it looks like Icom is about to hit it out of the ballpark with the IC-705. Let the drooling begin.