If You Can't Talk, You Can Still Listen

And many times listening is more important than talking...

Yesterday Thomas Witherspoon's excellent SWLing Post blog offered a guest post by Jock Elliott, a frequent contributor. In this post, Jock details how is father, a WWII Canadian Royal Air Force lieutenant, was shot down over Germany and his status (dead/alive, prisoner/in friendly hands) was unknown.

Then, as if by a miracle, letters and postcards from complete strangers started to arrive, notifying Mrs. Elliott that a German shortwave broadcast had announced that her husband was alive and a 'guest' of the German government.

You can read the whole story here: 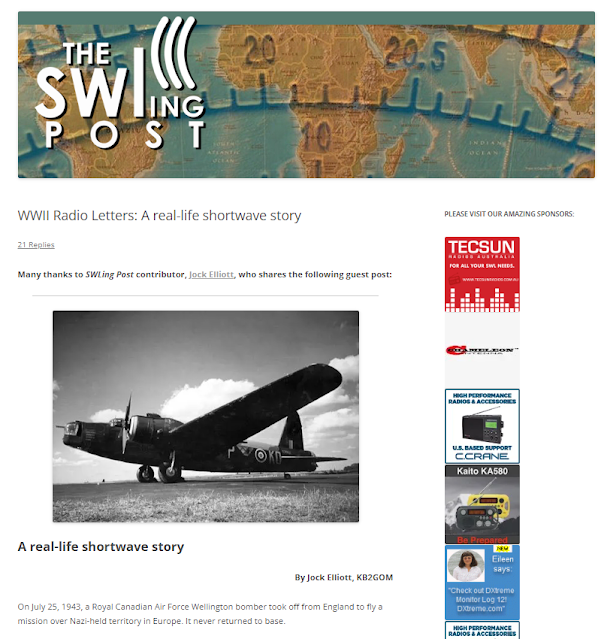 This was not an unusual occurrence. In early 1942 the US Government shut down all Amateur Radio transmitting activities. You know, spies and all that. Most Amateur Radio operators of draft age were quickly sucked into one of the services; if you could copy and send CW at 15 wpm or better, you had a golden ticket to a communications assignment. Older operators were ordered to pull their transmitters off-line. But unlike WWI, where the US Navy (which controlled wireless activity at the time) would actually come to your house and seize your gear and yank down your antennas, in 1941 operators were just told to go QRT, and everyone complied.

But nobody said you couldn't listen! Across the United States, and particularly along the northeastern seaboard, Amateur Radio operators and regular citizens routinely listened in on German commercial, government and military transmissions. There were formal and informal monitoring nets that listened faithfully to German broadcasts like the one discussed in Jock's post, in an effort to collect the names and service numbers of POWs. As brutal as the Nazi regime was, they were actually fairly responsible about reporting Allied POW information to the International Red Cross, and then broadcasting lists of POWs during their commercial shortwave broadcasts.

I'm guessing thousands of Allied POWs had their 'guest' status confirmed by shortwave broadcast. This information was a godsend to many families, who had no idea if their loved one was dead or alive.

The story of radio in WWII is incredibly rich. Radio didn't just inform, it was a true weapon of war. Both sides in the European Theater used radio skillfully, from broadcasting propaganda, to intercepting clandestine communications, to providing deceptive cover for battlefield operations, to pinpointing attacking aircraft and submarines, to communicating with spies and resistance groups.

And, as in this case, providing comfort and hope to an anxious family.