I come from an age when opening up and upgrading or maintaining your computer wasn't just a fun hobby, it was a necessity. Almost a survival skill for anyone in a tech related field. I clearly remember the day our Army unit received its first shipment of Heath/Zenith PC clones (very good PCs, by the way). The first thing we did was pull out the screwdrivers to have a look inside and pass judgement on the system capabilities. By the end of the day we were sticking third party VGA boards, modems, storage expansion cards and more into the expansion slots to test out compatibility and expandability. That was the norm. Even early generation laptops were designed and built to be tinkered with - adding RAM, swapping out batteries, etc. It was possible to keep a computer running and relevant well past its expected service life by doing simple component upgrades.

Then came the era of the fully sealed laptop. I think I blame Apple for this. Starting in the 2010s the laptop market swiftly moved to what were little more than hermetically sealed disposable pieces of plastic (or for a bit more cash, hermetically sealed disposable pieces of aluminum). While you could usually open up these devices (with no small amount of fear-inducing prying) they were not really designed to be serviced or upgraded by the owner. Then manufacturers like Microsoft took it whole other level and began producing high end devices that couldn't be opened for repair or upgrade by any means, EVEN BY MICROSOFT. The classic examples of this are the Surface Pro tablets, high end devices with notoriously bad batteries.

Customers were paying MacBook Pro-level prices for SurfacePros and having the batteries crap out in about a year ('crap out' as in not being able to hold enough of a charge to power the tablet for more than an hour or two). If you had bought Microsoft's extended warranty you were ok - send it off to Redlands and Microsoft would ship you a new one. If you hadn't bought the extended warranty you were out of luck. Not even Microsoft could repair it. Their only advice was to buy a new model which, like the old model, was not repairable. This problem persisted right up through the SurfacePro 7, and may plague later models. Now, I pick on SurfacePros because I use them as my 'daily drivers'; my work laptop is a SurfacePro 7 and in my office I've supported the entire line of SurfacePros from the 3 through the 7 series, and a smaller smattering of SurfaceGo tablets. I actually like the SurfacePros, I really do. They are outstanding devices that bring a true laptop experience to a tablet format. But I'd never pay for one out of my own pocket. Why would I sink that kind of money into a device that can't be repaired or upgraded?

Which is why this video caught my attention:

I remember hearing about the Framework laptop initiative over a year ago, when there was a lot of discussion swirling around tech forums on the web about the relative unrepairability of most consumer laptops. At the time Framework was just a concept looking for crowd source funding, but now it looks like the whole thing has become a reality. 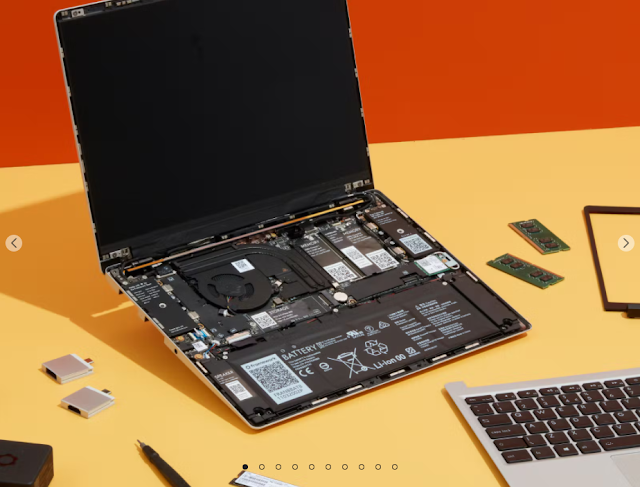 Watching the video I have to say that I love both the design and the execution. It's unlikely that Framework's laptops will win any awards in the gaming community, but for every day business-class computing, it's a winner. The design tackles a number of issues I've faced when managing hardware in an enterprise environment. Think of this fairly common situation. Both John and Sally need laptops. Sally needs one that has an HDMI port and USB C. John doesn't need HDMI or USB C, but does need a laptop with an SD card reader, two USB A ports and 1 TB of storage. Company IT will only provide laptops that have one USB C port and an SD card reader, and 500 GB of storage. Neither John or Sally are happy. With the Framework concept, IT can provide the bare-bones laptop and a stack of add-on modules that allow both John and Sally to configure their computers to meet their specific needs. And if something does break or wear out, like the battery goes dead or the keyboard goes bad, local IT can handle the fairly simple repairs in-house, without having to farm out the work or deal with warranty swaps of whole units. Turn-around time for repairs can be measured in hours, not days or weeks.

Modularity is one of the main reasons I'm fascinated by things like Panasonic Toughbooks and their Dell equivalents. These laptops are not just rugged, they are modular in design and are fairly easy to open up and modify. The Framework laptops certainly are not as rugged as a Toughbook, but as the video shows, they are well built. Even better, their modularity handily beats what we get with a Toughbook. Plus the Framework price is a whole lot less than a new Toughbook. Thousands less.

Ham radio guys and gals are a tinkering bunch. Its the nature of the hobby. Who else would order a bag of circuit boards and thru-hole components and spend a couple of days soldering up a gizmo, and call it fun? I know ham radio operators that have multiple 20 year old computers running in their shacks for no other reason than, if something goes wrong with one of them, they can tear it apart and fix it. What hams don't like is something that, by design, can't be repaired. That violates the ham radio secret codex that says "it must be able to be pulled apart and reassembled and still work".

While the cheapest Framework laptop may be too pricey for many hams, it could actually be a cheaper alternative if the cost is extended across its useful life. Issues that cripple a hermetically sealed laptop - a bad battery, a USB port that stops working, dead keys on a keyboard, etc. - are simple and easy component swaps. Of course this all assumes that Framework remains a viable business all the way through the useable lifespan of the laptop, and that's the great unknown at this point. What happens if  you buy a Framework laptop today, and the company disappears next year? This is why I'd love for a major player in the laptop world, like Dell or HP, to take this same approach to modularity and reparability. But I realize there's no chance either company would adopt a Framework philosophy; it's just not in their corporate DNA. Their business model is to sell in volume to repeat customers who need new laptops every few years. Selling them a competitively priced modular laptop that has a useful life beyond five years AND is cheap and easy to repair or upgrade isn't going to happen. Which is why I think Framework actually has a chance of surviving, and even thriving, in this niche market. There are plenty of laptop users like me who are tired of having to deal with unrepairable systems and want the ability to easily fix vs. replace. I may not be able to break my employer's addiction to Dell products, but in my personal life I can make that choice.

There may be a Framework in my future...

Email ThisBlogThis!Share to TwitterShare to FacebookShare to Pinterest
Labels: computer