I love clocks and watches, and I've written about this in the past. I also love to research and read about the history of radio, particularly radio operations involving two way communications (as opposed to broadcast radio, which is one-way only). It's clear that radio and time are inseparable. Just about everything in radio revolves around time. Our formal nets start and end at defined times. Much of our software like WSJTX and JS8CALL is tightly time dependent. Modern military and, increasingly, commercial transceivers are dependent on accurate time signals to synchronize things like frequency hopping, automatic link establishment, and automated digital messaging operations. Time is everywhere in radio. Has been since Guglielmo Marconi first thought about commercializing his 'invention' back around 1900.

My earlier post was about radio room clocks, particularly those that call out the mandatory quiet periods at 15 and 45 minutes past the hour. These clocks were designed specifically for maritime radio room use - a reminder to the operator to cease transmission for a 3-minute period and just listen on 500 kHz for any distress calls.

But there was another use for clocks in conjunction with radios, a use that was somewhat more utilitarian but just as important - in military message centers.

And, of course, message centers needed clocks. Everything was coordinated by time. Radio message traffic needed to be time-stamped and logged with the time received or sent. Operators needed to know when to switch frequencies to handle message traffic on different nets. They needed to time-track when physical messages (paper copies) were received or handed off. Basically, everything in a message center revolved around time.

It was during WWII that the concept of a purpose-built message center clock took hold. There may be earlier designs, but if there are I have not seen them. My my guess is that prior to the WWII era militaries just used whatever cased clocks they could procure. But starting with the run-up to WWII (which, remember, started in Europe in 1938 - a full 3 years before the the Japanese bombed Pearl Harbor), a few militaries like the US and Germany started specifying designs for message center clocks. Let's start with the US. The Army took the smart and easy path, and asked manufacturers like Chelsea, Hamilton, and Lowe to make a variation of the maritime 'deck clocks' they had been making for years. The first clocks were brass cased, later switched to a phenolic (Bakelite?) housing to conserve a strategic metal that was in short supply. The movements in these clocks were fairly rugged, simple to service, and were already in volume production. All the US Army had to do to make them 'army' was to have the words 'Clock Message Center M1 (or M2)' stenciled on the face. The M1 models had 4" faces, the M2 models had 6" faces, and most seem to have come with a secondary 'zulu time' hour hand. The Army had them mounted in a clever flip-open wooden box, which made them easy to transport and set up.

These clocks were a commodity item, produced in the thousands. If they appear in period photos at all it's because the photographer was taking a picture of something else and the clock just happened to be in the shot. Here's one of the best known (and clearest) photos of a message center clock in use. This photo is interesting because it looks like the radio is being used in an early M2 or M3 Scout Car. Note the telegraph key strapped to the operator's leg, and the home made speaker box. I'd guess that this picture was taken either pre-war, or immediately after the US entered WWII. This is a great example of what a 'message center' looked like in small units during the war - a single radio, a single operator, a clipboard with some standard message forms, and a clock. 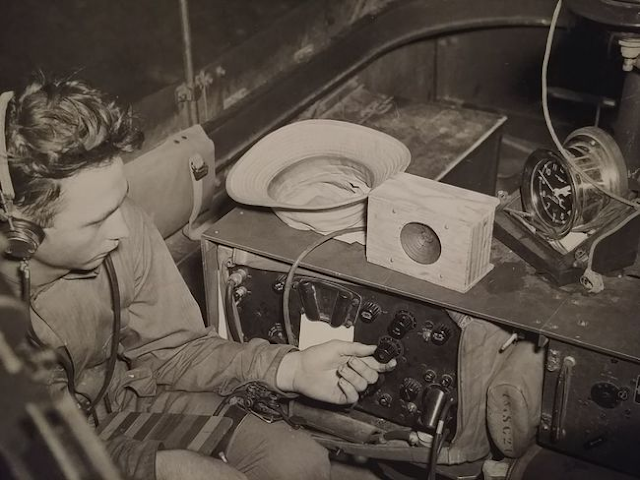 Some have asked, why not rely on wrist watches? A good question. We have to remember that prior to WWII a good quality wrist watch was a fairly expensive consumer item. Not everyone owned one. This was almost half a century before the arrival of cheap but accurate quartz watches. In the 1930's and 40's all watches were hand assembled mechanical units that could cost a working man's weekly wage, or more. Plus, the US military can not compel soldiers to use their personal property for official purposes - which means they can't compel you to buy and use a wrist watch as part of your Army job. If your job requires a watch, they'll issue you one. However, it's cheaper to provide a single clock that's available for all to reference than hand out a bunch of wrist watches. Then there's the issue of time synchronization. All activity in a message center had to be referenced to a single time source. If everyone is using their own wrist watches, and each watch is off a minute or two in either direction (very common with mechanical watches) then how are you sure that Message A arrived before Message B? In wartime this matters, a lot.

The German Army took a similar approach. Called a 'funkuhren' (radio operator clock), it was a standardized clock specifically designed to be used in message and communications centers. However, their clocks were a bit different - they appear to be large pocket watch movements in a modified case with a larger mainspring, giving an 8-day runtime. The whole thing is mounted in a wooden case, and the movement can swing out for winding via a  knurled knob or stem on the rear. Actually a pretty good arrangement. since it doesn't require a winding key like the American clocks do. 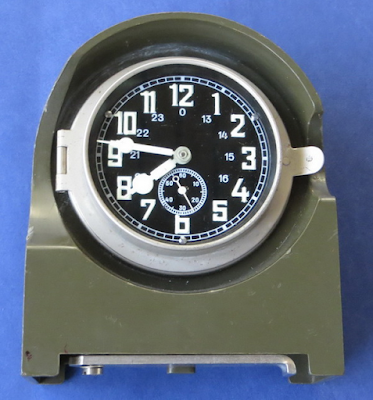 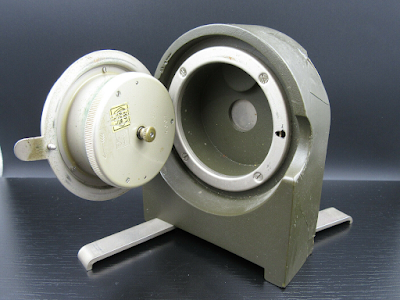 Evidently this design was so good that the Germans kept it in production after the war for issue to the new Bundeswehr communications units. I can't help but wonder if there's a warehouse full of these things somewhere in Germany, in unissued condition, waiting to be dumped out onto the collector market at reasonable prices. One can only hope...

So we've looked at US and German message center clocks from WWII. What about the British, French, Japanese, Russians, Canadians, etc? Honestly, I don't know. I've never seen any write-ups or on-line discussions of message center or radio room clocks in use by other countries involved in the war. I can only guess each country had some sort of standardized timepiece they adopted.
Now let's push forward to today. As a MARS and SHARES member I run a small message center. So I need a message center clock, right? OK, it's just for looks and tradition, but to me it's important. I'm always trying to connect the past to the present, so we don't forget.
Chelsea, the US company that made the majority of message center clocks in WWII, is still making pretty good reproductions. Not exact replicas, but considering the cost of a good working Army surplus M1 or M2 clock, they are good enough. In a nod to modern times and cost, these clocks use battery powered quartz movements. They also still use the same phenolic cases that Chelsea started using in WWII, but now they are made of a more up-to-date glass reinforced plastic. Overall they are pretty good clocks, and have a place in even the most modern of ham radio shacks.
But I have to think that the Germans did a better job of it, particularly for smaller setups. The Chelsea M2-style clocks are big. Six inches may not sound like a lot, but when the clock is sitting only a few feet from your face, it's a bit imposing. The smaller 4" M1 message center clocks would be a better option, but nobody makes a replica, and originals are very hard to find. The smaller German 'funkuhren' clocks seem like they were better suited to small setups. Sadly, nobody makes a 'funkuhren' replica, and good working examples go for silly high prices. But the idea that a large(er) pocket watch format can serve as an ersatz message center clock has me intrigued.
And I think I've spied my solution, courtesy of Seiko. It's the Seiko SNE370 wrist watch. It's not as large as a pocket watch, but at 43mm it's it's plenty big enough. It's got a clean, uncluttered face with a 24 hour inner ring, and it's got an accurate quartz movement. I can do without the day/date readout, and I'd love a second hour hand (a 'zulu' hand or, as it's called in the watch world, a GMT hand), but you can't have everything. One problem though... it's out of production. Aaarrrgggghhhh! I can't catch a break.
W8BYH out
Posted by Brian at 5:00 AM