Thomas Witherspoon posted this a few days ago on his (excellent) SWLing Post blog: 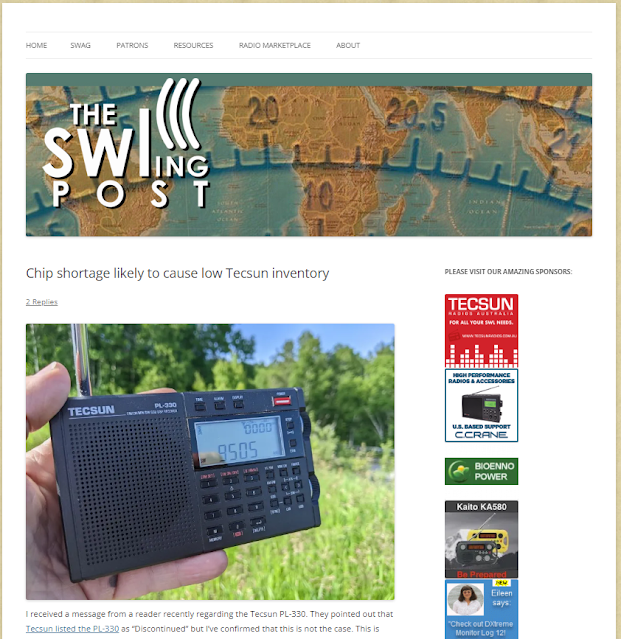 Silly me. I thought we were about out of the Great COVID And Fire-Induced Chip Shortage Of 2020 - 2022, but I was wrong. I guess if the current administration can blame everything else on Putin (Putin's Price Hike, Putin's Inflation, Putin's Food Shortage, Putin's Baby Formula Shortage, ad nauseam), we can blame this current round of chip shortages on him, too. And actually, according to Thomas, there may actually be something behind blaming Putin for our current and ongoing chip shortage issues. It seems Russia and the Ukraine are the primary sources for several strategic minerals used in chip production. So we'll call this Putin's Chip Shortage.
I've got a wide assortment of shortwave receivers. Heck, just about every Amateur Radio HF transceiver I own is a top-notch shortwave receiver. But I'm of the age and stage where dedicated shortwave receivers are still fun to collect and play around with. Down through the years I've had some pretty good ones. The collection starts with a 1950's era Grundig tabletop model with the dial gloriously laid out not just with frequencies, but with the names of the exotic location where signal originate from - London, Berlin, Moscow, Tokyo. Spinning the dial was a trip around the world. And the collection reaches all the way to the present era, with the diminutive and remarkably good C.Crane Skywave SSB.
The one portable receiver I had that always brings back memories is the Sangean ATS-909 (also sold by Radio Shack as the DX-398). 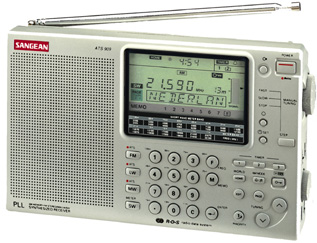 Based on reviews of the radio in publications like Passport to World Band Radio (sadly out of print, and badly missed), I picked up an ATS-909 just before heading back to Germany in 1998 for my second tour of duty there. At the time Central Europe was still a 'shortwave rich' environment, with powerhouse broadcasters like Voice of Russia (the old Radio Moscow), Deutsche Welle, and the BBC still pumping out content on shortwave. Additionally, I knew that many of the German FM broadcasters were switching to RDS, making the ATS-909's RDS decode capability a neat and useful feature.
While I can't say that the ATS-909 was a stellar performer on shortwave - most outlets rated its performance as just good to very good - the radio's build quality was outstanding and the ergonomics were excellent. Plus, it's performance on FM was considered best-in-class. That radio served me well in Germany, going along on a number of field exercises so my Soldiers could listen in on American Forces Network (AFN) broadcasts, local German stations, and the occasional radio show from the BBC. After the factory radio was stolen from our Volvo V70, the Sangean ended up doing service as an ersatz car radio. It slid perfectly into the gaping hole left in the center console where the Volvo radio used to be, and served well until I could get another radio installed. The ATS-909 eventually just gave up the ghost, too much time spent being rattled around in the car and sitting in the Georgia summer heat. I regretfully tossed it after the alkaline batteries belched up their contents in the battery compartment. I also kicked myself for not picking up one or two when Radio Shack closed them out a few years later.
For the past year or so I've been following the story of Sangean's replacement for the ATS-909, the ATS-909X and the 909X2. The ATS-909X was considered something of a disappointment - a bit deaf on shortwave reception when using the whip antenna (but a strong performer when using an external antenna), and some problems with AM sensitivity. The ATX-909X offered Sangean's usual excellent build quality and ergonomics, but with strong competition from lower cost mainland Chinese manufacturers like Tecsun, Sangean knew they needed to clean up the 909X's shortcomings (Sangean is a Taiwanese, not a Chinese manufacturer - there is a difference). So Sangean tweaked the ATS-909X's performance and renamed it the ATS-909X2 - just in time for chip shortages and COVID to hit. Talk about timing. 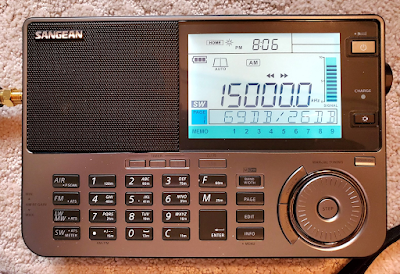 Reviewers really liked the improvements in the 909X2, but production was slow and prices for the radio, if you could find one, were high, with some retailers asking over $500. In the past six months production has increased, and the radio's price has settled down to about the $250 US level. Amazon now has regular stock of the radio and can deliver in a day or two.
But what about the lingering chip shortages? Some manufacturers like Icom have been very frank in their discussions about the impacts of the shortages. Production goes to the high demand/high volume customers like computer, military and commercial communications systems and automobile manufacturers. Low volume customers like ham radio and shortwave receiver manufacturers get low priority. This means the price and availability of the any radio - Sangean, Tecsun, Icom, Yaesu, Eton, Panasonc, etc. is in question. With this in mind I decided to go ahead and pull the trigger on the Sangean, and I placed an order with Amazon a few days ago.
A side-by-side comparison with the ATS-909X2's competition will have to wait. I've got several portable shortwave receivers to test against - the C. Crane Skywave, the Skywave SSB, the Tecsun PL-880, the Tecsun PL-310 and maybe one or two others hiding away. I'm particularly interested in seeing how well the Sangean performs on SSB compared to the PL-880 and the Skywave SSB, two radios that get high marks for sideband reception. One thing became abundantly clear to me in the few hours I've used this radio so far - the ergonomics and build quality are outstanding. Anyone who's spent any time with a portable SW receiver will find the controls clearly marked and well laid out. You don't need a manual to get up and running with this radio (but if you do, the manual is excellent). 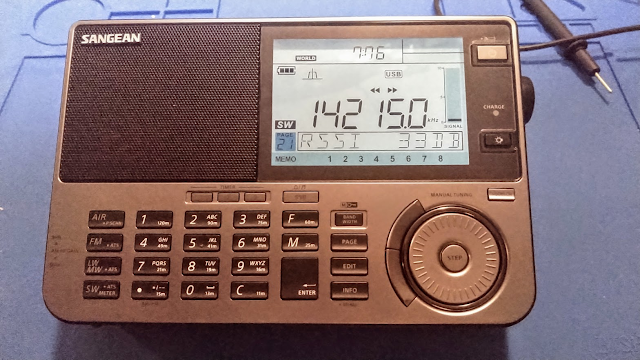 Sangean includes an external wire antenna, ear buds, and something few other manufacturers provide - a 'wall wart' power cube. The radio runs off of four AA batteries and can use alkaline, NiMH and NiCad chemistry types. A word about external antennas. Many manufacturers, including Sangean, include an external antenna with their radios. Many folks feel that a portable radio shouldn't need an external antenna. For commercial FM and AM broadcast reception, I agree. But for shortwave and ham radio reception, an external long wire antenna is absolutely necessary. You wouldn't expect your expensive Amateur Radio HF rig to operate well on 80 meters using a 3' whip antenna. Why would you expect a consumer-grade receiver to do better?  Be realistic. If you buy a portable SW/HF receiver also pick up (or make) an external antenna to use with it.
OK, let's wrap this up. Over the next few seeks I'll be doing a side-by-side comparison of these radio on the Amateur Radio bands, focusing on 75 and 40 meter sideband reception. I'll be looking at overall performance, ergonomics and form factor. All the evaluations will be done using the factory supplied long wire antennas. Will a clear winner emerge? Stay tuned!
W8BYH out
Posted by Brian at 9:03 AM