The XYL and I are beginning preparations for a week long camping trip later this summer. Of course radio will be part of the adventure. The question is, which radio(s)? If I look at the goals I have for this trip (beyond campsite setup and tear-down, meal prep, entertaining the XYL, walking the dogs, entertaining the dogs, feeding the dogs, general camper maintenance, shopping, talking with camper neighbors, sightseeing, etc, - those of you who camp know what's involved), the things I want to do with radio include:

Of course the IC-705 is in the mix. It's become my default camping radio. It can easily handle the DX, POTA, Winlink and JS8CALL duties, but at a low TX level (max 10 watts). 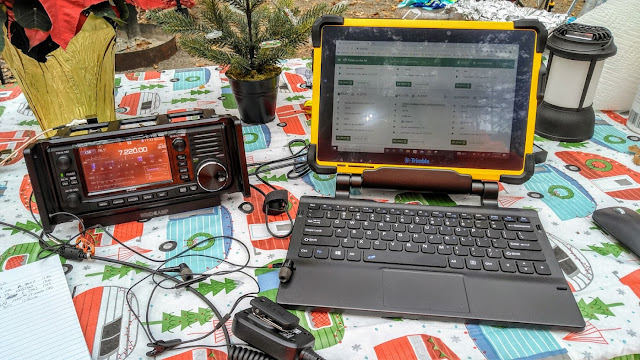 But for MARS and ALE I'll need a different rig. I've got a number of MARS modded radios - IC-7300, Yaesu FT-991A, IC-7100, IC-7200, even my Elecraft KX2(!), but only two are suitable for ALE operations - the IC-7300 and the IC-7200. Both of these radios bypass the band relays when scanning in 'split' mode. This means as the radio scans from band-to-band while running ALE you don't hear the 'clack-clack-clack' of the mechanical band filters switching in and out. The 7300 does this out-of-the-box, and my 7200 has the 'quiet scan' mod which achieves the same result.

Almost as important as the radio is the antenna selection. The campsite is a bit cramped, with 'neighbors' close-by. I won't have space to string a 120' end-fed, or even an 80' dipole. I always have a Chameleon end-fed EMCOMM II with me, just in case, but for high power HF I'm likely going go have to rely on a vertical. Problem is, most modern campsites are awash in RF hash generated by any number of consumer devices that campers bring along, from LED light strings to portable generators. A vertical is precisely the wrong type of antenna to use in that environment - they attract electronic noise and hash like a magnet attracts iron filings. I have a magnetic loop, which is electronically quiet - mainly because it's so narrow banded - but it's only good up to 25 watts on sideband, even less on digital.
I guess I've got some testing and planning ahead of me. Oh dear, how will I manage?
W8BYH out
Posted by Brian at 3:14 PM