I grew up in a profession obsessed with time, and the management of time. The US Army places great emphasis on coordination of events by time, whether it's the start of happy hour at the local officers club, or the firing of an artillery salvo marking the start of the latest ground operation. In the Army, time matters.

In my profession within the Army - mapping and surveying with the Corps of Engineers - time is of even greater importance. Accurate surveying requires extraordinarily precise tracking of time, whether it's marking the exact time you took an observation on Polaris (the North Star) to determine latitude (Polaris actually 'wobbles' a bit, so knowing the precise time of the observation is critical to accurate surveying), or making sure your survey grade GPS units are properly synchronized with the GPS satellite time signals.

I'm so enamored with time that back in 2010 I wrote a treatise about it on one of my other blogs. But today we'll talk not about the history of time or uses of time. Instead we'll take a look at how communicators, including Amateur Radio operators, kept track of time down through the years.

I believe radio operators - commercial and amateur - first started watching the clock right after the Titanic disaster. New maritime radio rules introduced in the wake of the Titanic sinking required commercial ships at sea and maritime radio stations on shore to observe a 3-minute 'silent period' starting at 15 minutes and 45 minutes past the hour. During these silent periods all radio traffic on the main maritime frequency of 500 kilocycles stopped and the frequency went quiet. Vessels in distress were assured their pleas for assistance would be heard during these silent periods. To help radio operators comply with the silent period requirement clocks soon appeared with special markings on the dial face marking out the 3-minute periods. Most of the early ship-board clocks I've seen were marine 'deck clocks' with the silent periods marked out in a red highlight. These were likely the first communications specific timepieces ever developed.

In my military world oceans were few and far between. When I searched the horizon from the deck of my HMMWV I was usually looking at a line of pine trees or a sandy ridge 😄. But the Army was just as dependent on accurate time as maritime communications. All Army operations take place in 'Zulu time'; they are referenced to Greenwich Mean Time (GMT), known in military parlance as Zulu. The US military has divided the world up into 25 time zones, so planners and operators always know how to calculate local operations in relation to Zulu time. This makes coordinating military operations and assets around the world much easier.

To make sure everyone was on the same sheet of music, time-wise, the Army developed its own version of the marine radio room clock and brought it into use right around WWII. The Army Signal Corps had the greatest need to coordinate time, since their signals and communications circuits spanned the globe. So the Army standard case clock was labeled the 'Clock, Message Center' and were designated either the M1 or M2 model. They were made in the thousands by Chelsea Clock Company of Boston and M. Low of New York City (likely a sub-contractor to Chelsea or a job shop 'assembler') and perhaps others. These clocks followed a standard design - Bakelite cases, 6" diameter 12/24 hour black-face dials, radium paint on the hands and the hour points on the face. All were key wound and were not chronometers, just highly accurate cased clocks - the War Department accuracy standard for these clocks was something like +/- 20 seconds in 24 hours.

In service these clocks were usually mounted in custom wooden cases - pop the top open, wind and set the clock and you're in business. These clocks were normally authorized to Signal units for coordinating communications schedules, and were also authorized to regular headquarters units of all Army branches for accurate time coordination. I remember seeing these in use in Army organizations well into the 1980s, both in headquarters units and in mobile communications shelters (RATT rigs).

Starting in the 1980's the mechanical message center clocks started to disappear from Army units. Why? Two words - quartz, and GPS.

Mother Army figured out that the inexpensive plastic battery powered quartz wall clocks - the kind that were available from every installation supply center - were more than accurate enough to meet the need. Why buy an expensive, fragile mechanical clock that requires specialized service when for the same money you can buy about 50 equally accurate quartz clocks. If one breaks just throw it away, stick a battery in a new one and keep pushing on. Overnight the old message center clocks disappeared and plastic clocks by Skilcraft, Franklin and others were hanging on every wall. The Army bought them by the gross, and broke them by the gross, but who cared?

Over the years I (a-hem) 'liberated' a few of these wall clocks. They were headed to the trash, directed there by Soldiers who didn't understand that all it took to get them running again was to replace the battery. Most of what the Army bought were the simple 12-hour clocks. Mundane but useful. What I kept my eye out for were the less common 24 hour clocks. The Army operates on a 24 hour clock - none of this AM / PM crap. There's 24 hours in the day and, dammit, the Army is going to count every single one of them! So it never made sense to me that we were using mostly regular old 12 hour clocks. If I found a good 24 hour clock headed to the dumpster I grabbed it.

Then in the early 1990s the Army introduced new communications systems, like the first generation SINCGARS radios, that used time sequenced frequency hopping for communications security. Overnight the Army became obsessed with incredibly precise time, and the way to get that precise time signal to synchronize frequency hopping was via GPS. Every GPS satellite is hauling around a couple of atomic clocks, and a precise time signal is part of the GPS data stream transmitted by the satellites. Suddenly the Army had access to accurate time anywhere in the world. Want to know what time it is? Just ask  your radio.

But what's available for the Amateur Radio operator to put in his or her ham shack? Actually, any old clock will do. The simplest solution may just be your computer. Most ham shacks today are computerized and every computer has an accurate clock built-in. You can simply take advantage of the time display on your computer's desktop or use one of a number of clock applications like Anuko, which connects to a network time server for its time signal.


Then there is the radio itself. Most modern radios have built-in clocks. These internal clocks are not 'disciplined'; they are not regulated against a GPS or network time server so their accuracy needs to be monitored, but they are actually pretty good.

Years ago a number of Amateur Radio manufacturers like Yaesu and Kenwood offered unique clocks specifically designed for ham radio or communications use. Most of these were quartz (battery powered) or electric (plug-in) units that helped the ham radio operator keep track of time around the world. When you are talking to a ham in Australia from your QTH in Chicago it helps to know what time of day it is for the guy on the other end of the conversation. Sadly, most radio manufacturers stopped selling these clocks back in the 80's or 90's and good working examples can be worth a bit of money. But if you manage to snag one at a hamfest or at an on-line auction you have a very unique piece of ham radio history. 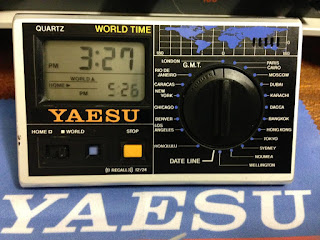 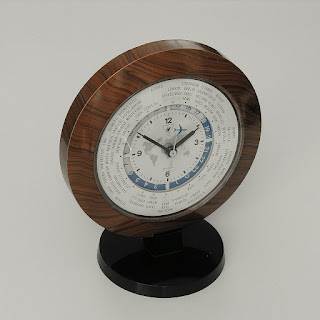 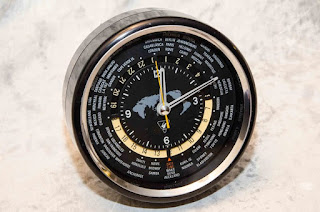 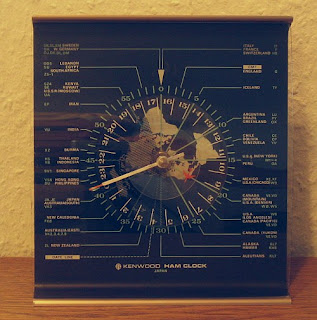 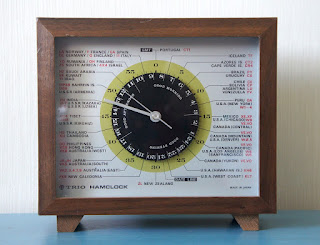 Are there dedicated ham radio clocks available today? Yes! Most are simple quartz movement clocks that have been re-badged for ham radio use. Some are digital display models. All will meet the need - just find one that works for you.

MFJ Enterprises out of Starkville, MS seems to be the most prolific ham shack clock retailer, with 20 or more clocks - digital and analog - in their current catalog.

The ultimate expression of 'money is no object' when it comes to ham shack clocks has to be the current offering from Geochron. The Geochron Ham Radio Edition, only available through DX Engineering, starts at a whopping $1,899. If you've ever seen a full sized Geochron map in the flesh you know they are visually stunning. Sure would look good perched on the wall above that new Elecraft K4. 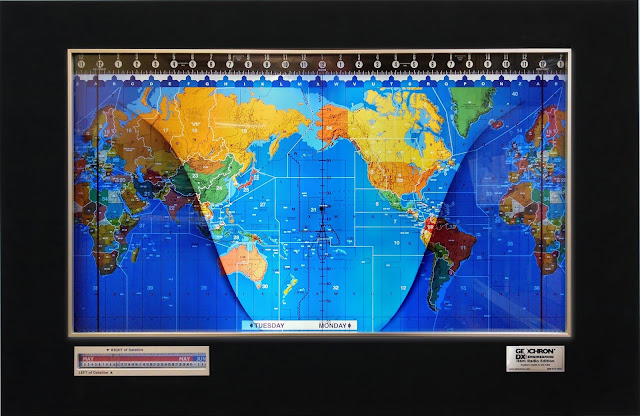 But for me the neatest ham shack clock available today - one that hearkens back to the early days of radio communications but doesn't cost an arm and a leg - is the replica ships radio room wall clock sold by Cafe Press. This clock has been in the Cafe Press lineup for well over a decade. It's a simple 12 hour quartz movement with a replica US Maritime Commission radio room clock face. I've owned a number of these down through the years, and I've given several away as gifts to fellow hams. One of these clocks has been running in my office at work for over 10 years with no issues, and it keeps great time. For $30 they can't be beat.

Well, I see it's time to get on the radio. Good luck with your own radio room clock search, and if you find anything unique or interesting let me know in the comments!