I recently traded some stuff around, sold a few things off, and ended up buying a Yaesu FT-891 for portable work. 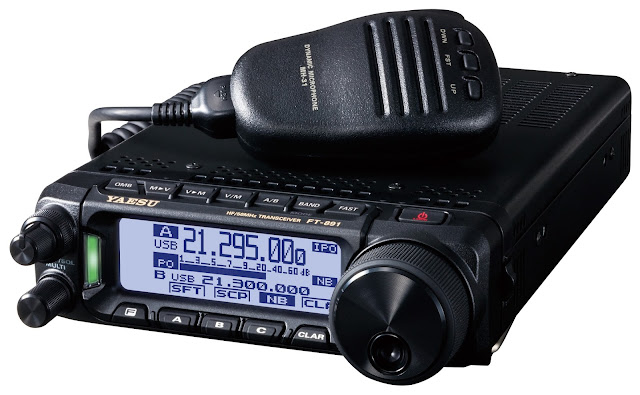 I've owned this radio in the past. It was an early production example made in late 2016 and I bought it soon after I got back into ham radio. The FT-891 had been announced at Hamvention in 2016 and hit the shelves soon after. At the time it seemed to be the answer to what I was looking for - a small form factor 100 watt HF radio that offered modern digital signal processing. The radio also allowed me to keep my promise to my wife to keep my ham radio 'footprint' small (and that didn't last long, ha, ha).

I intended to make the FT-891 the centerpiece HF portion of my new downsized shack. After all, it held the promise of being able to do just about everything you'd want an HF rig to do. On paper the feature set looked great - high resolution display, 32-bit DSP, CAT control via USB, maybe a built-in sound card (some early chatter about the radio hinted at it), band scope, backlit buttons. I even went so far as to purchase the matching Yaesu FC-50 tuner.


I have to emphasize that as an SSB voice rig the FT-891 is as good as anything out there in its price class and form factor. In fact, its better than most. What makes the difference is the really well implemented DSP.

I used the radio mostly in a semi-portable mode on my back porch or in my car port, hooked up to an Alpha-Delta DX-CC antenna I had hanging in my trees. As I mentioned, SSB performance was all I could hope for and the menu interface was easy to figure out. The radio was a lot of fun to use for voice communications.

But from the beginning the FT-891 was problematic on digital modes when using a Tigertronics SignaLink sound card interface. The rumors about the radio having a built-in sound card were just internet myth; the radio did come with a USB interface for programming and CAT control, but no soundcard. I bought a SignaLink and tried my damnedest to get the whole setup to work reliably, but the radio would run for a few minutes and then lock up, and often required a full factory reset to get working again. I sent the radio to Yaesu for testing and troubleshooting, but they reported the radio was working 100% and sent it right back. In frustration I got my hands on a Yaesu FT-857 and tested it on digital modes with the exact same setup - same computer, software, cables, SignaLink and settings. It worked on digital modes without a hitch. Substitute in the FT-891 and like clockwork the radio would lock up. It could have been operator error, but I don't think so. The radio also acted squirrely when hooked up to various CAT control programs, most notably N4PY's rig control software. I became convinced that the radio was the issue - I either had a one-off lemon, or the entire design was a kludge.

Very quickly a few other nagging issues revealed themselves:

To pile insult upon injury, in 2017 the ARRL reviewed the FT-891 and reported that "...the transmit phase is about the highest we've yet seen in the Lab. For this reason alone, I would be wary of pairing this transceiver with an RF amplifier." Considering the ARRL Lab has been testing transceivers for decades, this is a pretty damning report. Many Yaesu fanboys say that this phase noise issue is irrelevant in the real world, while at the same time cautioning that you need to keep the FT-891 away from other radios when operating in a Field Day-like environment. I don't think the issue is irrelevant, and it's something an experienced, top-tier manufacturer like Yaesu should have caught in development and testing.


If you take these issues in total it's clear that Yaesu rushed this radio to market without proper development and testing. It was half-baked.

After a year of using the radio and getting more and more aggravated that Yaesu didn't seem to want to address these issues I sold off the FT-891 and tuner (with full disclosure to the new owner). My operating needs had changed and the FT-891 wasn't getting used much anyway, so off it went to a new home.


Fast forward almost two years and a strong use case has emerged for which the FT-891 is the best candidate in a very narrow field. I needed a 100 watt portable HF radio with DSP and which could run digital modes using a SignaLink interface. There were other radios in the same market segment that could have fit the bill, particularly the Yaesu FT-857 and the Icom IC-7100. Both are good radios, but the FT-857 is what can charitably be called 'old technology' and lacks the FT-891's advanced filtering and TXCO, The Icom IC-7100 has a great feature set and I gave it a hard look, but I didn't need the IC-7100's VHF/UHF side and the additional cost it added to the radio. Plus, the form factor was not a good fit for how I intended to use the radio.

But what about all the issues that plagued my first FT-891 - why buy into them again? This second time I wasn't looking for a radio that would serve as my main rig. This time I was looking for a robust 100 watt radio I could take to the field and operate exclusively on digital modes for extended periods of time. Think HF Winlink in a disaster scenario. And everything - radio, tuner, SignaLink, cables, microphone, headphones, manuals, etc. - needed to fit into a Pelican 1520 case.

In current production FT-891's the inability to switch dynamically between USB/LSB is still there. One thing that mitigates this issue is that the radio's CAT command set allows rig control software (like Ham Radio Deluxe) to dynamically switch between USB and LSB from the software interface. The lack of a supply voltage readout can be mitigated by using an inexpensive in-line volt meter. Both of these are acceptable work-arounds.

The 'tick, tick, ticking' was a bit more serious because it interferes with digital mode operations. Chatter on the internet indicates that Yaesu has quietly fixed the hardware issues that caused the ticking problem, and may have addressed 'hissing' or feedback issues coming through the speaker and headphone ports. There is some discussion indicating that Yaesu did a major board re-design. What is clear is that purchasers of new production units seem to be reporting fewer problems.

What about the locking up in digital modes? That was a HUGE concern, but recent videos by amateur radio operators I trust, like OH8STN, report that current production FT-891s work just fine on digital modes using a SignaLink.

In short - it appears that Yaesu has cleaned up some issues. But Yaesu is completely silent on this. They have neither acknowledged the radio's problems nor indicated they've addressed them in firmware or hardware.

So I took a leap of faith and ordered a new FT-891. I was immediately re-acquainted with all the good and bad points. One thing that did hit me when I took the radio out of the box for the first time - Yaesu excels at making HF radios in this form factor. The FT-891 is compact and solid. Solid like a brick. There is a LOT of manufacturing technology crammed into this radio. I'll admit that any other Amateur radio manufacturer (Icom, Kenwood, Alinco) could easily produce a radio with the FT-891's feature set (and many already do), but none of these other makers has exhibited the ability to stuff it all into a package the size of the FT-891 and make it work.

So what about digital modes? In the limited testing I've done it works just fine on digital. I've only tested it running PSK on Fldigi, but so far zero issues, and this is using my original SignaLink and all the original cables. This further reinforces my conviction that the first radio was a lemon.

But in handling this new radio I'm also struck by what could have been. Considering the technology options available in 2016 when this radio was still in development it would have been easy for Yaesu to incorporate an on-board sound card interface, eliminating the need for an external device like the Signalink. Yaesu could have also chosen a better display technology. A higher resolution dot matrix display would have provided more screen 'real-estate' and a more readable display. And of course there are the firmware issues like the LSB/USB mode switch and the lack of a supply voltage display that remain unresolved and likely will never be addressed by Yaesu.

Sadly, the FT-891 will always be the good little radio that could have been great. All Yaesu had to do was pay a bit more attention to the hardware and software when the radio was in development. Unfortunately it seems as though the key design goal for the FT-891 was that it not compete with the FT-991, and because of that it was shortchanged on some of the features that could have made it an outstanding little rig.

I believe the market is ripe for an FT-891'A' model that incorporates a sound card interface and cleans up the firmware and phase noise issues. That could be game changer, with the potential to impact the 100 watt HF portable/mobile market in the same way the Icom IC-7300 has impacted the desktop market. But it seems Yaesu is content to just keep cranking out the original FT-891, and to be fair they seem to be selling just fine.

So it is what it is, and for my purposes it works well. I'll continue to report on the FT-891 'from the field' with some experiences with it as a portable digital station. Stay tuned!