I've mentioned in a recent post that I've been around the world and back again with computing devices for Amateur Radio. I've bought, borrowed or re-purposed over a dozen different computers over the past few years in search of that 'perfect' computing device for use as both a general purpose shack computer and as a deployable, rugged, EMCOMM computer.

I have to say that, with two exceptions, every computer I tested worked just fine as a device for running ham radio related software - Winlink, JS8CALL, Fldigi, Ham Radio Deluxe, Icom's RS-BA1 package, Ion2G ALE, RT Systems rig programming software, and more. This is what I call the 'ham radio software stack'. The computers I tested included:

With a few exceptions, all of these computers did just fine running the ham radio software stack; they had enough computing power to get the job done with no sweat. The exceptions are an early Panasonic CF-19 running a single core Celeron processor, the two Surface Go's (nice form factor, but painfully anemic low-end CPUs) and the Raspberry Pi 3, which can't run Winlink. For me, the inability to run Winlink is a deal-killer. Forget Wine, or PAT or any other Windows emulator for Linux. If the OS can't run Winlink natively then I don't want to mess with it, especially for EMCOMM work.
Some of this computing hardware got left behind for what I'll call personal issues. I didn't like the keyboards, or the screens, or they weren't rugged enough, or didn't have enough USB ports, or an HDMI port or... OK, it's all subjective. Some computers clicked, some didn't. For example, the Panasonic CF-19 and 31 Toughbooks are great rugged computers, and good used examples are available from dozens of resellers at very reasonable prices. But the 'square' screen aspect ratio drives me nuts - things just don't look right.
The winners on this list include the Acer Aspires, the Dell Latitude 5420, and the Trimble T10. The Acer Aspire line is a good blend of performance and price. You get a lot of computing 'oomph' for less money than similar offerings from Dell, HP, etc. However, Acer achieves that low price by going light on the physical build. That's my way of saying they are flimsy. I wouldn't take an Aspire to the field too often, but if you are in the market for a good performing laptop for shack use, the Aspire line is well worth a look.
The Dell Latitude is a beast. It's part of Dell's rugged computer line - not quite as tough as a Panasonic Toughbook, but plenty tough enough, and it comes with some very good computing specs: a great backlit keyboard, a very good touchscreen, an i5 quad core processor, plenty of RAM and SSD storage, more ports than I can count. It's my go-to field laptop.
But the device I really want to talk about in this post is the Trimble T10. If you follow this blog you've seen this tablet show up in a number of photos, most recently here: 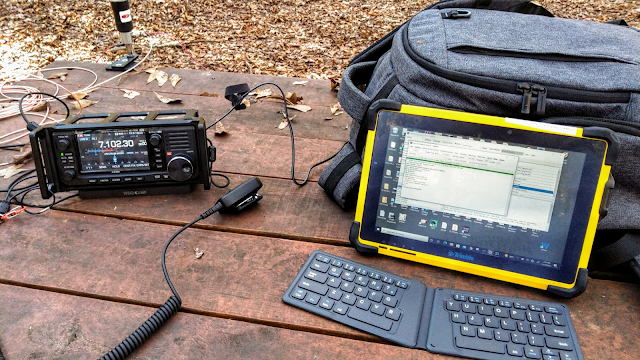 It's an odd piece of computing hardware because it's not marketed as a tablet. If you know anything about Trimble, you know they make high end surveying and GPS equipment. That's how I got to know about the T10 and get my hands on one. Trimble sells the T10 as a survey data collector - something you sync up with a high precision GPS receiver and go out and collect data with. But the T10 is really just a modified fully rugged (and MILSPEC) Windows 10 tablet running an Intel i7 processor. From that perspective it's like any of the half-dozen other ruggedized tablet brands out there on the market from Dell, Panasonic, Getac, and others. In fact, based on the form factor I suspect the T10 line may be manufactured in the same factory that makes Panasonic's Toughpads.
Here's what puts this device head and shoulders above anything I've tested so far:
In short, the thing is a beast. I could hammer tent stakes with it and it would still work. But therein lies one of its drawbacks; it's heavy and just a bit unwieldy. Plus the factory suppled 'docking' keyboard isn't the best, which is why I'm trying out Bluetooth keyboards.
The T10 is such a good computing device that it's actually one of my main shack computers. In fact, for digital operations for everything except MARS work, this is the computer I use. It sits in a multi-port docking station (that provides extra Bluetooth and an HDMI port) and runs my entire suite of ham radio software:
If I need to take a radio to the field for digital operations, I simply grab the T10 off of its docking cradle, toss it into a bag with a Bluetooth keyboard and mouse and head out. Rain or shine, it doesn't matter; the T10 simply doesn't care.
Like everything else Trimble sells, the T10 is (very) badly over-priced. That's why I don't own this particular tablet. It's on long-term loan from a company interested in evaluations of 'hardened' tablets. But when I do have to return it I'll go looking for a replacement. The T10 has proven to me the feasibility of the Windows tablet as a general purpose field computing device, and I'll likely go looking for a used Panasonic Toughpad with similar specifications. The good thing about the Panasonic line is that they absolutely dominate the rugged computing market, so there are always hundreds of used devices available on eBay or from resellers like Bob Johnson's Computer Stuff out of Delaware (I've bought a few Toughbooks from Bob Johnson's, and it's a good company) 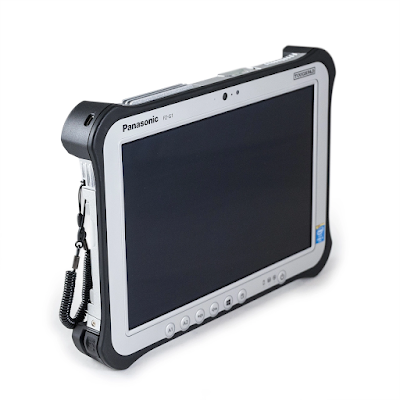 But why a tablet instead of a laptop? For field operations I think a ruggedized tablet has some significant advantages over a laptop. First, it's easier to seal up a tablet than it is a laptop, so they tend to be slightly cheaper. Next, a tablet is more likely to have a built-in GPS, particularly if it's cell service (or 'data plan') ready. Many ruggedized tablets have external hot swappable batteries. You can run them effectively without a keyboard or mouse, using finger pokes, or a stylus. Because they are specifically designed to be used outdoors many come with brighter screens for daylight readability. They also tend to be physically smaller and lighter than a ruggedized laptop with a similar screen size.
Of course there's drawbacks. The biggest limitation is ports. Most rugged laptops come with only one or two USB ports, and no HDMI port. You'll need a port expansion dongle or a docking station. They also don't stand up by themselves very well - you end up having to prop it up against something, or get an add-on stand like a RAM Universal Stand. And because most manufacturers don't see tablets as general purpose computing devices, you normally get a lower system capability set - slower, mobile CPUs, less RAM and less storage than you'd get with a laptop of the same screen size. Remember, there's no cooling fans on tablets, and more processing power = more heat. These devices necessarily run at lower speeds and with lighter weight processors just to keep from melting down. Suffice to say, you won't be playing Call of Duty on a tablet, at least not for very long. But that's OK. Most ham radio programs are what I'll call 'low intensity' applications - they don't tax the system capabilities like gaming software does. Applications like Winlink and Fldigi run perfectly fine on tablet-class hardware specs. If you buy a tablet with at least an i5 mobile processor you should be fine.
So there you have it. If you're looking for a rugged, weatherproof computer to use for EMCOMM, don't just look at laptops. Take a look at some of the rugged tablets that are out there, particularly the used Panasonics or Dells. There's lots of good deals on eBay and from third party re-sellers. A tablet may just be a better fit for your needs than a laptop.
W8BYH out.
Posted by Brian at 5:00 AM