It's been an odd week. Part was spent up in Ohio for a family gathering (and just a little bit of radio fun), some of it back in Georgia for a MARS exercise, getting ready for the Stone Mountain Hamfest and just some local ragchews on HF.

First, Ohio. I'm an Ohio 'native' - although I was born in New York and spent much of my childhood in New Jersey, my family moved to northwest Ohio while I was in the 10th grade. So, Maumee, Ohio, is what I consider my home territory. That's where I graduated from high school, that's where I went to college (at nearby Bowling Green State University), that's where I met my lovely wife, that's where I entered the Army from. I really like the region, the small town atmosphere, the people, and I love the Great Lakes. I really love 'big water'. I even have a ham radio tie back to the region. My callsign, W8BYH, is a vanity call that was originally assigned to my late father-in-law. George Sass was an active ham radio operator in Point Place, Ohio, (just outside of Toledo) who tragically passed away in the 1960's. When I got my General ticket I asked the FCC if I could have his callsign and they gave it to me based on the family connection.

I still have a lot of family that lives up in Ohio, in the Cincinnati and Dayton areas, so we decided to head up there for a small family gathering. It was a great time. Plus, I got to play radio for an hour or two. I took the KX2 along and set it up in both my hotel room and at my brother's house. Made a few contacts on the CQ SSB contest going on over the weekend, but mostly it was about just trying out my setup and working out some issues on the Surface Go 2 tablet I was using for rig control.

The vertical antenna is the Elecraft AX1 with the 40 meter extension. Under the right circumstances it works quite well, but sitting on the AC unit in a hotel room with a south-facing window isn't what you can call 'right circumstances' - I heard very little and, of course, had no contacts. Later at my brother's house I set up my ParEndFedz end-fed long wire and had better luck, but I didn't think to get any pictures with that setup. Duhhhh.
Speaking of the Surface Go 2, I think I'm done evaluating it, and my overall reaction is, "don't bother".
I'm testing a loaner, and it's a model with the painfully anemic Intel 6615Y processor (good Lord, what was Microsoft thinking?). The tablet is so slow it can't get out of its own way, let alone handle something like Ham Radio Deluxe. I suspect the high end Surface Go 2 models with the i3 CPU work just fine, but at that price point (pushing $800 with the type cover) you can just go get a nice small form factor laptop with an i5 processor, more memory and more USB ports, and be happier.
Speaking of computing platforms, Julian, OH8STN, posted an interesting YouTube video a few days ago where he finally - FINALLY - admitted that his generations of kludged together Raspberry Pi setups he put together to run Winlink, WSJTX and JS8CALL in an off grid scenario are not as good as a simple Windows laptop (he actually uses a Surface Go 2, but I suspect it's a more powerful model). You can read all about it on one of my recent blog posts.
On Monday the FedEx guy dropped one of these off (and a full week late - FedEx needs to get its head out of its ass): 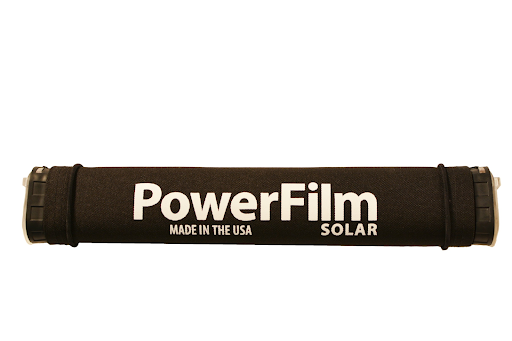 Many of you know I'm a huge fan of LiFePo batteries, but you still need to be able to re-charge them in the field if you are out for an extended operating session, or involved in an emergency. I wanted something that could run my IC-705, my KX2 or even my FT-818 (but not all at the same time!) and could re-charge itself. The battery (a Lithium Ion, not a LiFePo) is contained in the tube and the flexible solar panel is permanently attached to the tube. The tube also holds a charge controller, and input and output ports. It should provide enough watts to power one of these QRP rigs for most of the day. More to come.
Stone Mountain! This weekend (6 - 7 November) was the Stone Mountain Hamfest. I went Saturday, trying to off-load a few items I no longer need. Only marginally successful, and it was COLD!! Then disappointment of disappointments, the folks from MaxGain Systems didn't have the pole sections I needed. Grrrrr. But any hamfest is better than no hamfest, and I did have a good time. Compared to olden times (i.e., pre-COVID) it was sparsely attended, there were relatively few vendors and nobody seemed to be buying anything in the boneyard. Mostly just tire-kickers. 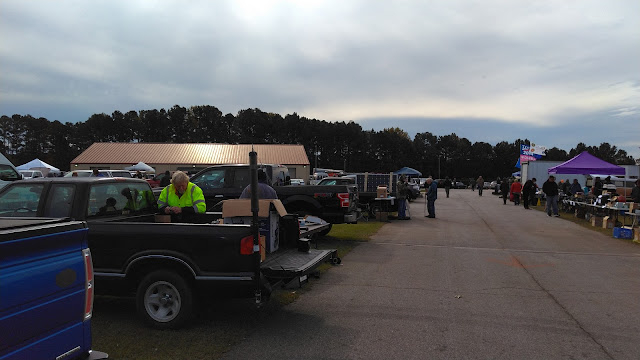 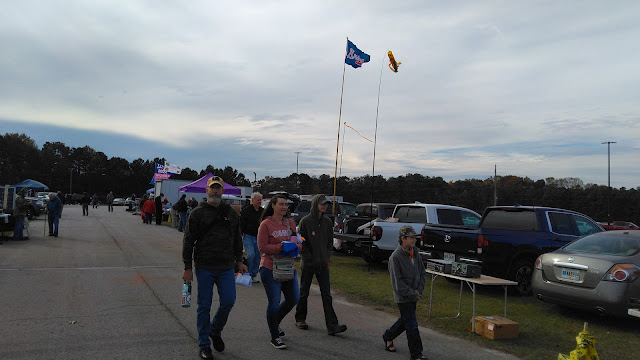 A few wayward items did catch my attention. Panasonic ToughPads, anyone? This vendor had a pretty good pile of used ones. Some were very used, but $400 for a good condition i5 ToughPad really isn't bad. 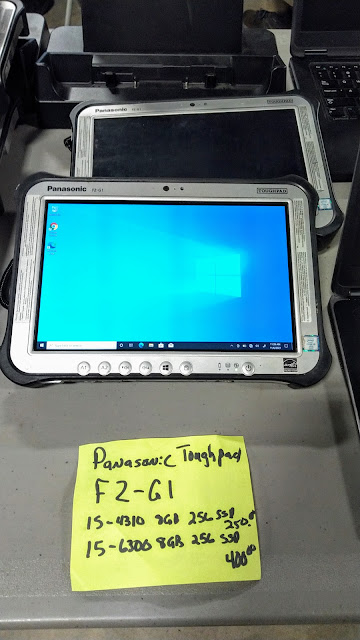 Be still my heart! A glorious PRC-47 'manpack' HF rig. A whopping 20 watts of radiation goodness all wrapped up in a box the size of a case of MREs. And none of this sissy 12 volt stuff - this baby takes a manly 24 volts. I wanted this sooooo bad, and the price was actually pretty decent, but the seller couldn't guarantee that it works on transmit. I had to very, very reluctantly walk away... 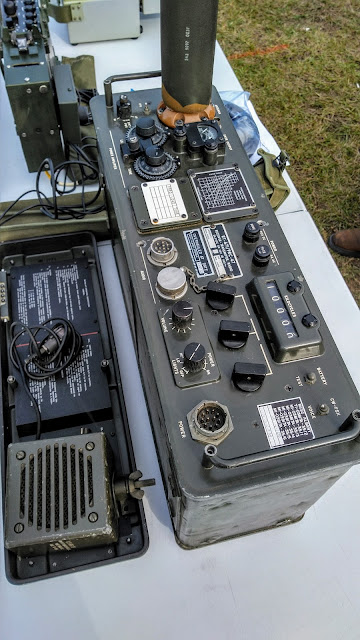 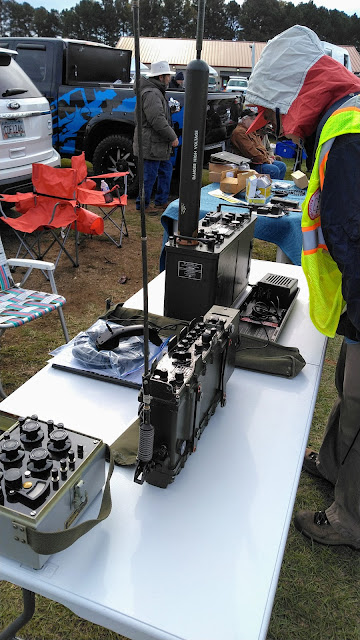 Well gee, it looks like I've been doing this vertical antenna mounting thing all wrong. Put the mount inside the bed, not outside. I'd look so cool hauling down the road with one of these tied down to my front bumper. 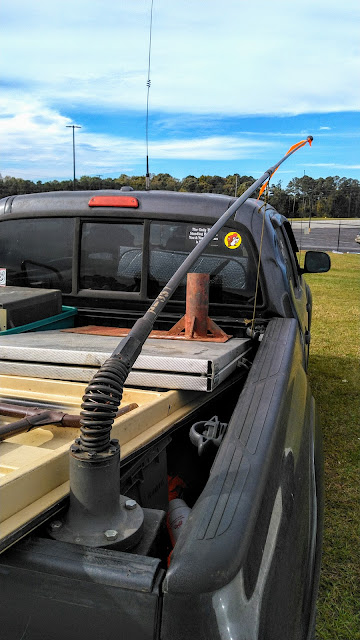 Last but not least, I had a lovely visit with the folks from Shack-in-a-Box.com. They are also the Lea family of HamRadio.world fame, and I've followed their YouTube channel for years. It was great to finally meet them, hear about their experiences, and take a look at some of their products. 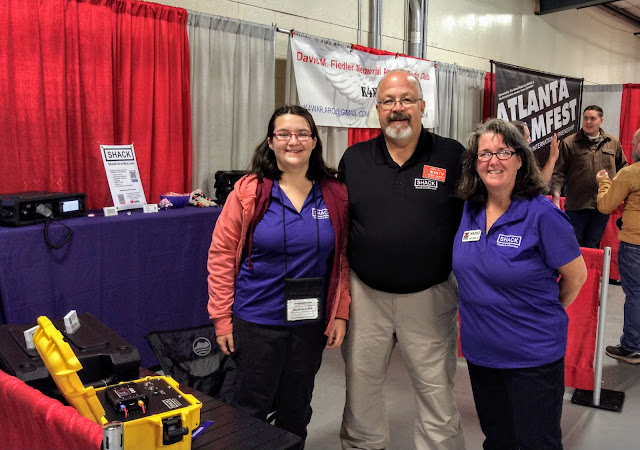 James and Michelle Lea have raised four wonderful, successful children, all of whom are Extra-class operators (that's Grace, KE3G in the photo). Well done! Check out their website and follow their YouTube channel.
That's it for this week!
W8BYH out
Posted by Brian at 6:00 AM