I have all the toys. What I don't have is the field operating time. So, last Sunday I was reminded that the monthly Georgia AUXCOMM net was scheduled for 1400 hours and I figured it was the perfect time to get out in the field and 'play radio'.

I wanted to see if I really could stuff everything I needed into my DSLR backpack, go to the field, set up and operate effectively on voice and digital modes. Is this a truly viable concept?

Some things have changed since I took this picture a few months ago. I've ditched the tablet keyboard in favor of a small, inexpensive folding Bluetooth keyboard, I've replaced the Comet Antenna HFJ-350M 'toybox' antenna set (which is a well made piece of junk) for the Elecraft AX1 vertical, and for Sunday's test I substituted the MAT-705Plus tuner for the Icom AH-705, just to save space. I also included my PowerFilm LightSaver Max battery pack in lieu of the Bioenno 4.5 amp hour LiFePo battery.

I gave myself an artificial time limit - 30 minutes to be set up and operating at a minimal level of voice and digital capability, and if necessary improve the setup as time goes on. But fate makes fools of all plans, and when I got to my first choice for an operating location - a school parking lot at a high spot in the county - I was surprised to find it full of cars. There was some sort of a children's basketball camp going on. Really? On a Sunday afternoon? So, immediately switching to Plan B (which I had not yet formulated), I headed to what's become a default location for a lot of my club's operating activities - The Ridge Nature Area. By the time I got there I was down to less than 20 minutes before the start of the net. Time to improvise. My plan had been to set up an end-fed long wire antenna, but there wasn't time for that. I knew the Elecraft AX1 wouldn't give me the reach I needed. So I was forced to look outside of my DSLR backpack for a solution. It came down to my trusty old Chameleon vertical. By chance I had the components in the bed of my pickup, so it was available, and it's fast to set up.

By hustling a bit I was able to get set up and operating on HF voice just as the net opened.

In all, it was effective. I was having trouble being heard by net control, who was located down near Savannah (I'm just south of Atlanta), but I think that's because I was operating on only 5 watts. I had another station (ironically located north of Atlanta and also operating QRP) relay me in. If I had bumped up my power to 10 watts I'd have done better, and I'm convinced that if I had set up the end fed long wire I'd have done a LOT better. 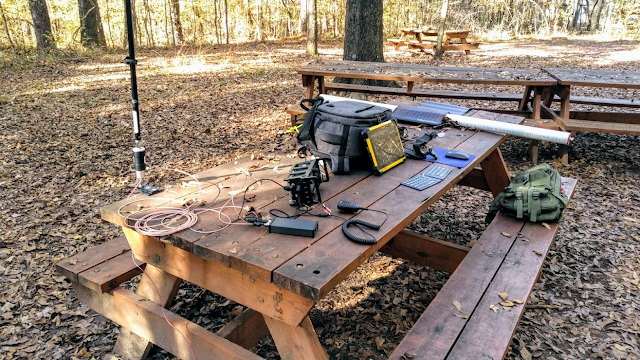 So this gets me back to a question I've posed in the past - is 10 watts enough for emergency communications? No, 10 watts is not enough for assured communications. I wouldn't bet my safety, or my family's safety, on just 10 watts, not unless I had no other choice. And I do have other choices - 100 watt rigs. But these 100 watt rigs are overkill in terms of size and weight, and draw so much power that they require large batteries or power supplies. What the civilian EMCOMM community needs is a good, weather resistant, battery powered 50 watt (or even 20 watt) HF radio that incorporates all the modern bells and whistles: USB for rig and digital sound card control, built-in tuner, battery pack, Bluetooth and wi-fi. The answer actually sits before us in these pictures - a 50 watt version of the IC-705. C'mon Icom, get 'er done!

OK, back to Sunday. While listening to the net check-ins and waiting for my turn, I was able to get my tablet set up and synched with the radio via wi-fi. It's fast and easy using Icom's RS-BA1 software. Then it's a simple matter of firing up Winlink and finding an open frequency. 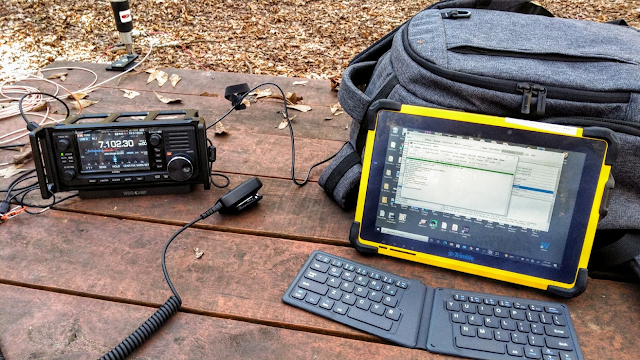 A few observations:
Fifteen minutes to establish basic voice and digital comms on HF. Not bad. But as we used to say in the Army, 'keep improving your fighting position'. I can be up and operating at a minimal level in 15 minutes, but if I was planning to be in the same location for more than an hour or two I'd make improvements. I'd deploy the EFLW antenna, bump up the transceiver power, reposition the solar panel, maybe move the entire station to a better location.
But for this speedy under-15 minute set up, I'm happy.

Email ThisBlogThis!Share to TwitterShare to FacebookShare to Pinterest
Labels: emcomm