Earlier in the week the Mrs. and I took off with the camper and headed to Red Top Mountain State Park on Lake Allatoona. This was the first time in almost six months we were able to get away and do some camping. In retrospect we should have picked a different park, or at least a different site. Our site was simply too small for our camper (which is only 22' long, from bumper to hitch) and was so difficult to get in to that it was dangerous. Red Top Mountain is undergoing a major renovation, and the state is re-habbing most of the campsites, so maybe we'll try it again in a few years. But what the state can't fix is the traffic noise from I-75 which runs close to the park. There was a constant low roar coming from this heavily used interstate that ruins the camping vibe. But we enjoyed ourselves regardless.

As usual, while preparing for the trip I flipped and flopped around trying to decide what radios to bring. I followed my own advice and brought my MARS-modded Yaesu FT-891 as a 100 watt 'last ditch' radio, but what else to bring? What would be this trip's QRP 'toy'? My KX-2? My IC-705? My FT-818? My CTX-10? Decisions decisions decisions.

The nod went to the IC-705 and the backpack setup. 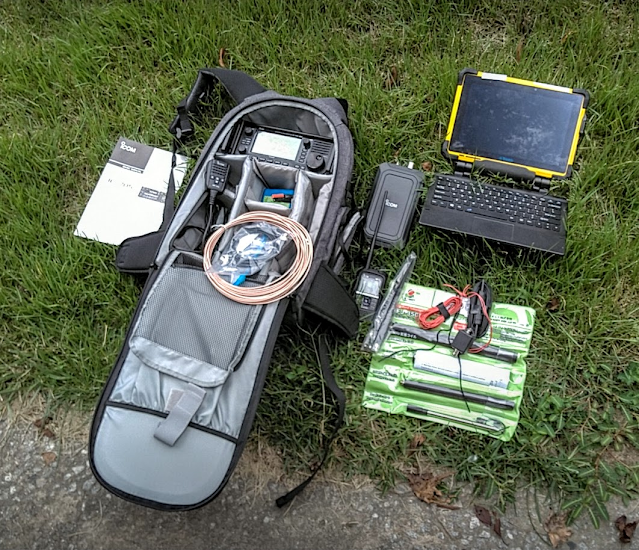 And it was a good choice. I strung the ParEndFedz Trail Friendly 10 - 40 meter end fed in the air and started chasing POTA operators (I didn't activate Red Top Mountain, I just 'hunted and pounced'). It was the first time in a very long time I had the chance to just sit down at the radio, spin the dial and look for contacts. I was reminded once again what a great radio this is. The SWR on the antenna was below 1.5:1 on 10, 20 and the SSB portions of 40 meters, so there was no need for the tuner. Ten watts got me as far away as Brazos, TX and northern Indiana, so no complaints there. It was just a fun couple of radio days.

So, one camping trip down, another one coming up in January. Maybe, just maybe... snow?
W8BYH out
Posted by Brian at 9:31 AM

Email ThisBlogThis!Share to TwitterShare to FacebookShare to Pinterest
Labels: camping