A Digital Dilemma - TNCs But No Radios?

Sometimes stuff just happens. For a few weeks I have been lazily working on a post about the Kenwood TH-D72A, singing its praises and encouraging you to go get one of these classics before Kenwood pulls the plug. Looks like they were a step or two ahead of me, because I saw this posted to the Gigaparts site late yesterday:

Some wags on Facebook chided me, telling me Kenwood announced the death of the D72 at the same time they announced the pending demise of their flagship TH-D74 DSTAR/APRS handheld. Honestly, I don't remember seeing anything about the demise of the D72. Maybe I was just focused on the announcement of the D74 and didn't pay attention. Or maybe it's because I'm getting old. Or both.

Anyway, this post will now take a turn to a topic I've been thinking about for a while - the death of the TNC-capable VHF radio, and what to do about it.

Many say, "packet is dead, nobody needs TNCs anymore", and the manufacturers seem to be leading that chant. Kenwood is (was?) the last manufacturer to support general purpose TNC integration, either by building rigs with built-in full featured AX.25 TNCs, like the TH-D72a and the enormously popular (and still in production, I think) TM-D710a. Kenwood was also the last mainline manufacturer to make a mobile VHF radio with a data port that allows the user to hook up an external TNC. The TM-V71A is still listed as available on Kenwood's website, but is out of stock with all retailers. It too may just be waiting for the undertaker.

Icom and Yaesu have not offered VHF mobile radios with built-in TNCs for a long while, but until fairly recently they each kept a few radios in their lineup with 6-pin DIN data connection ports for external TNC connections. I don't know when Yaesu last offered a VHF mobile rig with this capability, and Icom's last model, as far as I can tell, was the the ID-880H DSTAR rig that went out of production at least two years ago.

Yaesu has kinda' sorta' redeemed itself by keeping mobile and handheld rigs in its lineup that have built in 'KISS' (keep it simple stupid) TNCs. A KISS TNC offers a partial implementation of the full AX.25 packet protocol, leaving out things like digipeat, mailbox and flow control capability. This means a manufacturer can provide key TNC functionality with much lower hardware overhead. For APRS and Winlink use, it's a great compromise. However, Yaesu seems to have so tightly bound the KISS TNC functionality to APRS in their rigs that it's tough to get the radios to work with Winlink. In fact, I don't know that anyone's been able to do it.

Today if you want to get into packet APRS or Winlink your best bet may be to go buy an HF rig! Yup, both Icom and Yaesu still make all-mode multi-band (HF/VHF/UHF) 'shack-in-a-box' radios that have data ports on the back. The Icom IC-7100, the Yaesu FT-991A and the classic Yaesu FT-818 are still for sale, even during this time of 'the Covid'. The IC-7100 and the FT-991A will both give you up to 50 watts of output on VHF. The FT-818 will only provide a few watts, depending on your power source, but still, it's amazing what that little rig can do.

In fact, this is exactly how I do it. My Winlink 'station' is a Yaesu FT-991A. It handles both HF and VHF Winlink. For the VHF side I'm using a Coastal Chipworks TNC-X connected to the radio's data port. Works like a champ. 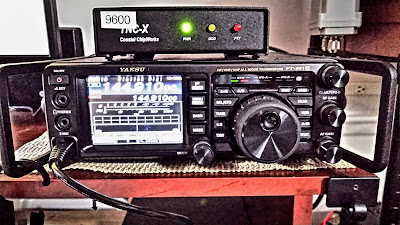 So maybe if you want to do VHF packet, Winlink or APRS you need to first go HF!