Until recently all this digital activity was done using a collection of different radios - whatever happened to be on the bench. Sometimes it was a QRP rig, sometimes it was a 100 watt rig of one manufacturer or another, in one configuration or another. I eventually figured out that I spend too much time fooling around with radios and not enough time building software and operational expertise.

The other issue is that I never built the level of standardization I felt I needed for effective communications - a single system configuration that was easy to figure out and support. Most of what I do is on Winlink, Fldigi (PSK31) and JS8Call. The station needed to have three components - an effective HF rig, a VHF rig with a companion TNC for VHF Winlink, and a computer to tie it all together. So I made the decision to set up a dedicated HF & VHF digital station using on-hand equipment. I didn't want to spend a single dime on new gear, but I wanted the setup to be effective, and cool looking. Because looking cool is everything in EMCOMM. Like this:

I was lucky in that I've got an excellent HF rig for the purpose - the Icom IC-7100. The 7100 is Icom's current rendition of the 'shack-in-a-box' concept. I traded into this radio about a year ago, attracted by it's ease of operation, good filtering, and the fact that it has a built-in soundcard modem for HF digital operations. I wrote about this IC-7100 in more detail in an earlier post. I did the MARS mod on it, and used it on and off as a field radio and in my shack as a back-up. But over time it got shuffled aside, packed away and almost sold before I came to my senses. I didn't know precisely why I needed to hang on to it, I just knew I needed to keep it around. It doesn't do any one thing spectacularly, but it does all things very well.

In this use a radio doesn't need any fancy front panel interfaces - no watefall displays, no band scopes. A simple frequency and mode display is all that's really necessary. The radio is driven by the software application - it's merely an extension of the computer. That said, the IC-7100 actually has a very good monochome touch screen display and the rig is extremely easy to use in the stand-alone mode. 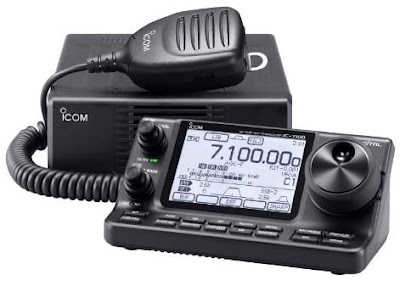 HF digital modes tend to be full duty cycle (unlike SSB voice). Also, this is not a QRP operation; full output power is what's called for - key down, 100% power for extended transmit periods. Resonant antennas and/or robust antenna tuners are necessary. My end-fed long wire antennas are 'mostly' resonant on the ham bands, but often need tweaking with a tuner to get the SWR below 2:1. This means a tuner that can handle 100 watts at full duty cycle. Most tuner ratings are based on SSB voice duty cycles (which are often less than 50%), and most of those tuners would be damaged in short order by the 100% duty cycle of full power digital modes. This is why 100 watt tuners often state that they can only handle digital modes at 30 - 50 watts. I needed a tuner that can handle 100 watts at full duty cycle, so this meant a tuner that's rated for twice the radio's output power. I settled on the LDG AT-200Pro tuner. I'm using this model with another radio for MARS digital work so I know it does a very good job, plus it interfaces seamlessly with Icom radios using the appropriate cable from LDG.

What about VHF? The only real need I have for VHF digital is VHF packet for Winlink. The DSTAR capabilities are nice, but I've got an IC-D5100 set up specifically for DSTAR and it handles those chores better than the 7100 (except for HF DSTAR, something I have yet to try). Unfortunately the 7100 does not have a built-in packet TNC. But what radio does these days? Except for Kenwood the industry seems to have abandoned this market, and Kenwood's offerings are getting long in the tooth. This means an external AX.25 packet modem. I use a Coastal Chipwoks TNCX, but those recently went out of production. The old (but still manufactured) Kantronics KPC3+ seems to be the standard these days.
There are two VHF Winlink nodes in my county, along with a Winlink digipeater (KK4GQ-15). I can reliably hit the digipeater on 10 watts from my QTH. During exercises I've set the Winlink application to auto-connect with a local node every 30 minutes (a neat feature built into the software) and the radio just loafs along for hours on end, automatically logging in to send or receive waiting traffic while I attend to other chores.
Of course you can't do digital without a computer, and I recently wrote a companion piece on what needs to be installed and running on an effective ARES computer. The EMCOMM football holds all the software and references needed to effectively run HF and VHF digial modes in a 'grid down' power out situation.
This dedicated digital station is extremely versatile. It can run:
Now, it can't run any of this simultaneously - it's single mode operation only. But that's OK, because I rarely have a need to operate on multiple modes at the same time. When I do run up against that requirement I just use a back-up radio such as a VHF/UHF HT or mobile radio to monitor the second mode or a coordinating frequency, and then switch the IC-7100 between modes as needed.
Is all this capability unique to the IC-7100? No, of course not. You can easily achieve this with any combination of HF and VHF/UHF radios. The IC-7100 is just what I happened to have on-hand. Remember, it's not the hardware or software, it's the concept - broad capability and flexibility on digital modes. How you achieve it is up to you, and that's the fun of it!
W8BYH out
Posted by Brian at 8:00 AM