I'm testing a new radio for portable EMCOMM work. This is a radio I've considered for years, and has a feature set that looks pretty impressive on paper, but the form factor always put me off. But a recent interest in finding a single radio that would serve as an excellent candidate for ARES, EMCOMM & MARS use in Georgia caused me to finally overlook my aversion to the form factor and give it a try.

I had been using the Yaesu FT-891 as a portable station, but it's shortcomings continued to grate on me. So much so that recently I had switched back to using the much larger Icom 7200 for portable work. It was a bit heavier to schlep to the field, but overall its performance was much better.

What killed the FT-891 for me is that a few months back a small group of local hams went to a park for a few hours of playing radio and swapping lies. A good friend brought his FT-891 to operate. The phase noise from the FT-891 was so bad that it effectively drove all other radios off the air. That was it. My (second) FT-891 had to go.

At the same time I was doing some evaluation of JS8CALL for our local ARES group, and working on an implementation proposal for HF communications support for Emergency Management Agencies (EMA) in Georgia. Part of this effort was identifying a radio that came closest to meeting the HF and VHF/UHF EMCOMM needs in a single, easy to use and easy to support package. The requirements for this idealized radio included:
What I was really after was a 'shack-in-the-box', a single radio that can do it all. Initially I looked at the Yaesu FT-991A. I own this radio and really like it. It performs without most of the drama that came with the FT-891, but still has some shortcomings. Particularly the almost maddening firmware menu complexity which makes it difficult to configure for digital modes. Once it's all set up it's a digital mode champ, but don't you DARE adjust any one of the dozen or so settings that can impact digital operations or you'll screw everything up. It's as big a drama queen in this as the FT-891 (they share the same menu structure).

The FT-991A had two other shortcomings that are not really the fault of the radio, just a reflection of external issues that make it less than ideal. First, it lacks DSTAR capability. Yaesu is wedded to C4FM (System Fusion), a competing VHF/UHF digital mode. Nothing wrong with C4FM, it's just that DSTAR is the VHF digital mode standard in Georgia ARES. Next, Yaesu radios don't work well with the MARS digital software modem package, MS-DMT. Again, this is not the fault of the FT-991A. The developer of MS-DMT hasn't built any of the digital feature settings for the FT-991A into the configuration library for MS-DMT. This makes it very difficult to get any current production Yaesu HF radio working with MS-DMT.

So this left me searching for another 'shack-in-the-box' option, and it needed to be a radio that's in current production. The search immediately narrowed down to one option - the Icom IC-7100.

As I mentioned earlier, I've looked at the IC-7100 on-and-off over the years for my own personal use, but I was always put off by the form factor. I'm not alone in this - just read the reviews on eHam or QRZ.com. Folks just don't 'get' the odd control head configuration. It's so... well, it's just odd for a radio marketed as a mobile rig. 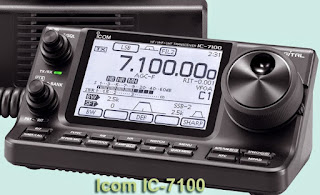 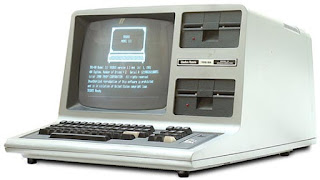 But in this evaluation we're focusing on function, not form, and the TRS-80 IC-7100 hits most of the performance objectives I outlined above.

A few weeks ago, through QRZ.com, I was lucky enough to find an Amateur Radio operator in Michigan who had an IC-7100 that he was willing to trade for my Yaesu FT-891. I've been evaluating the IC-7100 pretty heavily since I got it, and I have to say that now... I 'get it'. The control head is actually very well thought out, and perhaps the best (or only) way to incorporate both a large touch screen and traditional settings buttons in a single interface. The 'odd' control head is a winner. The only shortcoming is the relatively low screen resolution. The low resolution works against the otherwise excellent interface.

The IC-7100 meets all of the evaluation criteria with the exception of a built-in tuner. Some may be surprised to hear me state that of all the criteria I could live without, a built-in tuner is at the top of the list. Most built-in tuners can only match 'almost resonant' antennas - they have at best a 4:1 impedance matching capability. In EMCOMM you may need to have to try to match anything from a busted CB antenna to a few hundred feet of chain link fence just to get a signal out. An internal tuner will be useless for this task, so you'll need a more robust external tuner anyway. Let me use my IC-7300 as an example. I run that radio with an end-fed wire antenna that is 'almost resonant' on the HF ham bands. But I also use the same setup for MARS, which operates well outside of the Amateur Radio frequency ranges, and the end fed wire has no close natural resonance on those frequencies. This forces me to bypass the 7300's internal tuner and use an external 200 watt tuner so I can safely run digital modes at 100 watts (a tuner's digital mode capability is usually half or less than its rated SSB capability, due to the more demanding full duty cycle of the digital modes).

Icom has also slipped in a few additional 'parlor tricks' that add greatly to the radio's usefulness for EMCOMM work. First is the ability to sweep frequencies within a band for antenna resonance - a built-in SWR meter. While the functionality is somewhat limited, it is still very useful. Let's say you are supporting an EOC and you need to move over to a new HF antenna, but don't have a tuner. The built in SWR meter will at least let you know if the new antenna is close to resonance. Next is a built-in voltage meter. Very important if you are operating on battery power. Last, the IC-7100 incorporates a basic band sweep feature that can let you know where there's any band activity. While not really necessary for EMCOMM, for regular use it can let you know how busy the band is. Icom also incorporates a temperature monitor, so you can tell how hot your radio is running, and (Praise the Lord!) backlit buttons on the control head, so you can see what you are doing in the dark.

Configuration for digital modes has been dead simple. I've found Icom radios - the 7100, 7200 and 7300 - to be as close to 'plug-and-play' on digital modes as you can possibly get. What helps is that this series of radios is very well supported by the digital software developers. So far I've run the IC-7100 on Winlink (using VARA on HF and on VHF with a TNC-X), and with JS8CALL and using HRD's Digital Master module. It works smoothly with all software. I've only got two recommendations - make sure you use the correct CI-V address (for the 7100 it's 88) and don't rely on the Icom baud rate 'Auto' setting. Manually set the radio's baud rate to something like 9600 and make sure it matches in the digital mode software's rig control interface. After that it should be smooth sailing.

Before closing let me discuss one of the features that the IC-7100 offers that I don't think gets a whole lot of attention, and that is the concept of 'over-the-air programming'. This is something that the military and commercial communications systems have used for decades. While implementation with the IC-7100 would be crude by comparison, it is still a concept that can work. The IC-7100 takes SD cards, and you can program the IC-7100 using an Icom .icf file stored on an SD card. The .icf files are small enough (< 300k) that they can be easily transferred as email attachments, even via Winlink. So, if an ARES EC working at the state or regional level needs to get a new settings file out to the operators in the field, even in a full 'lights out' scenario, the file can be easily transferred over the air as a Winlink attachment, downloaded to an SD card and uploaded to the radio, all in a matter of minutes.

My evaluation of the IC-7100 will continue, but based on my testing so far I think it is perhaps the best available option for a fully featured EMCOMM radio. Icom really did a great job with this rig, so don't be like me and let the form factor put you off.