I read today on the HP Calculator Facebook page that Hewlett-Packard (HP) has taken its HP-35s calculator out of production. I quickly checked Amazon and sure enough, they were down to just one in stock. Wanna' guess who bought it? 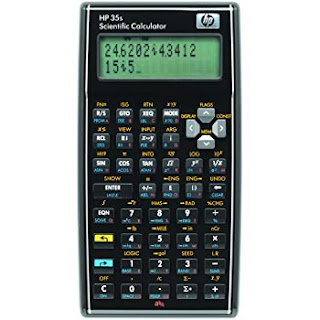 If true, if HP has closed down production of the 35s, it's a sad day. While the HP-35s was never a great calculator when compared to its predecessors, it was a very good RPN (Reverse Polish Notation) calculator and represents what may be the last in the line of classic HP RPN pocket calculators that started back in 1972, with the introduction of the HP-35.

I closely followed the development of the HP-35s, about a decade ago. The developers in HP's calculator division (at the time never more than two or three individuals) maintained a running dialog with HP calculator fans via the Yahoo email reflector, and they allowed fans to have direct input on the features and design. It was a very collaborative development process, and the HP calculator community was proud and delighted to have been included. The name HP-35s was deliberately chosen as an homage to the classic HP-35. When HP released the calculator I purchased one directly from the on-line HP Store. When it arrived I noticed that the display was slightly mis-aligned in the frame. I called HP support and the lovely lady sent me a second calculator and told me to just keep the first one. So I ended up with two - one for home and one for work.

My love affair with HP calculators started back around 1976 when my brother, who worked in a testing lab, started bringing home one of the HP-25's the lab made available for the technicians to use. At the time I was using a Texas Instruments calculator, probably a TI-51 or 55. Texas Instruments calcluators were significantly less expensive than HP's offerings and it was the only thing this struggling college student could afford.

But the HP-25 was a glorious instrument! Incredibly well built with that wonderful signature HP mechanical key 'click' that let you know, without a doubt, that your data had been entered or your operation had been selected. By comparison, Texas Instruments keypads were mush, and were notorious for crapping out, usually in the middle of a final exam.

And then there's HP's famous implementation of Reverse Polish Notation, or RPN. RPN is a calculating methodology that eliminates the use of parenthases in mathmatical operations, and instead uses the concept of 'stack registers' to manage calculations. Once you learn RPN and stack management you can fly through calculations faster and more efficiently that using TI's algebraic operating system. If you want to learn more about RPN you can skip over to the RPN Wikipedia page for more info.

My love/obsession with HP calculators was fed by the US Army. In 1979 I graduated from college and took a commission as an officer in the Corps of Engineers. I found myself tracked into the Corps' topographic field (today known as geospatial engineering). There soon followed some very heavy courses in geodesy, surveying and mapping. The Corps of Engineers had gone 'hog wild' for HP calculators and early desktop computers. In fact, when reporting for class at the Defense Mapping School's Mapping, Charting & Geodesy Officer's Course we were issued HP-31E calculators and given an hour of instruction on RPN before being tossed into the deep end of the pool - survey network adjustment using least squares.

Over the years I accumulated a fair number of HP calculators. Some I bought, some just floated in my direction. There has always been an HP calculator on my desk or in my briefcase since 1981, and I have two strong favorites - the HP-11C and the HP-32S. They are just excellent, rugged work-a-day calculating devices. Many consider the HP-11C one of the best calculators ever produced, and I have no argument with that.

Even if HP shuts down production of all of its calculators (sadly. a very likely scenario), the spirit of HP's classic calculators will live on. There are a number of excellent iOS and Android-based emulations of various HP calculators (many written using HP's own RPL programming language), and a company called SwissMicros is manufacturing a series of excellent HP calculator 'representations'; each SwissMicros model follows the layout and operating pattern of classic HP units like the HP-41, the HP-42 and the HP-15, but they are not straight clones and incorporate modern features like USB connectivity, SD card storage, advanced graphics, etc.

I'm also of the opinion that calculators and Amateur Radio go together like peas and carrots (as Forest Gump would say). Amateur Radio is, at its heart, a science-based hobby, and there's always a need for a calculator in the shack. And in my shack there will always be an HP calculator.