Yesterday I dropped my Yaesu FT-70 off at Clairmont-Skyland in Gainesville, GA for an alignment and check-over. It's off frequency on TX and RX, and it's beyond my ability to troubleshoot and service. 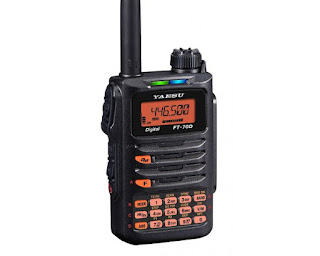 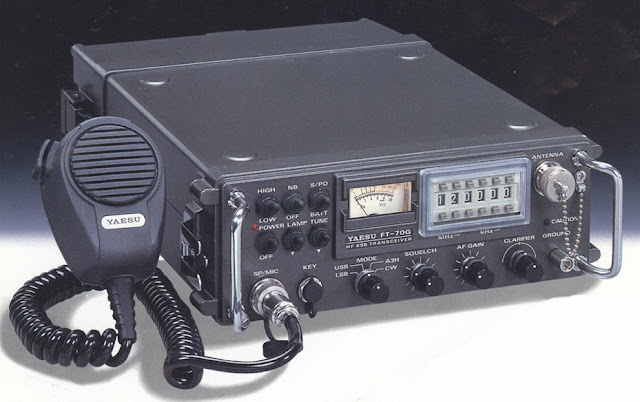 The FT-70G, to be exact. This is a rare bird. I've only seen one in the flesh, and it's the one I own. These were manufactured by Yaesu in the mid-late 80's for the commercial market, and a good number of them were bought by various militaries around the world. In one of the more famous cases, they saw heavy use in Central America by the Nicaraguan Contra rebels. The US Congress would not authorize the sale or loan of US military communications equipment to the Contras (but were OK with giving a lot of moral support to the Nicaraguan Sandinista Communists and the Ortega brothers). The Contras ended up buying a lot of commercial gear, including these little Yaesus. One rumor has it that Ollie North saw the Contras using these radios on one of his visits to the region and reported favorably on them.

Since I happened to be on the Honduran/Nicaraguan border with Task Force Tiger out of Fort Bragg the night the first free elections were held in Nicaragua - 26 February, 1990, and we fully expected the Sandanistas to stir up trouble on the border to interfere with the voting, you could say this little radio is something of a touchstone to my military career.

I bought the radio from a seller on QRZ.com a month or so ago. I knew it was a crap-shoot, but it was a complete set: radio, tuner, speaker/mic, two battery packs, power supply/amplifier/charger and the original Yaesu backpack. The price was right, so I took the plunge. I wasn't disappointed. 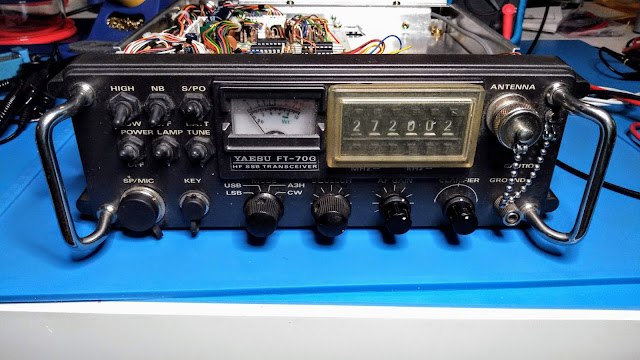 When I received the radio I opened it up to see what the insides looked like. Being a 30 year old radio I expected corrosion, maybe a few spider nests, etc. To my delight, the inside was a clean as the day it came off the assembly line in Japan. It's also an homage to the way radios used to be designed and built - hundreds of discreet components neatly stuffed on to boards and expertly soldered, with just a couple of early ICs thrown in to let you know what the future will look like. I was also relieved to see that the radio came with the LSB filter. Being a commercial/military design, most were USB-only. Yaesu included the socket for the LSB filter, but LSB was an extra-cost option. The USB & LSB filters are the two large rectangular cans in the center of the picture below: 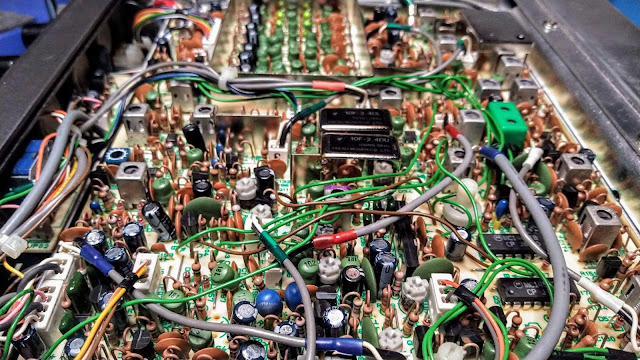 The radio came with the external tuner, every bit as large as the radio itself. It's a great companion piece, but I think I'll end up just using my Elecraft T1: 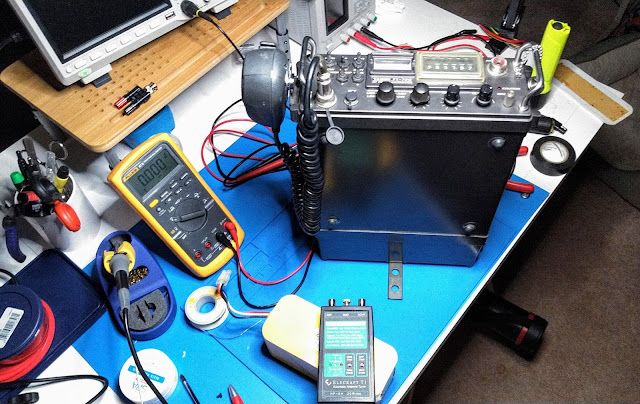 Although the FT-70G came with a Yaesu-designed canvas backpack and has an SO-239 connector on the face of the radio (similar to the PRC-77), sadly it's not really designed for manpack use. It's more of a 'carry to the field location and set up in a semi-mobile configuration' rig. I don't know how robust the PA section is, so I'm not sure how SWR tolerant it is. Remember, this is an HF radio, not a VHF rig. Maybe I could find a 'closely resonant' 10 meter whip antenna to try, along with a conuterpoise. We'll see.

Once I get the radio back and spend some time with it on the air I'll do a more in-depth review of the entire FT-70G 'system', so stay tuned!