Right now I'm following an odd on-line discussion on QRZ.com regarding the Yaesu FT-991A. There's no small amount of FT-991A bashing going on. But what makes this discussion odd is that it's taking place on the 'Online Swapmeet' portion of the website, and it's the guy selling the radio who started the bashing!

Heck of a way to make a sale. It's almost like he really doesn't want to get rid of it.

A number of people in the discussion are comparing the FT-991A to the IC-7100. After some thought I figured that was a fair comparison. These radios offer very equivalent feature sets, and are based on the same technology. So why is one almost 50% more expensive than the other? Honestly, I can't really say for sure, but I can speculate...

But first, let's do a quick comparison (because of the limitations of Google's Blogger platform I can't format for a side-by-side setup, so we'll just stack the comparisons):

Icom IC-7100 (major differences with the FT-991A highlighted)
This is a comparison of the basic feature set, and based on what we see here I can spot some of the reasons for the price difference - the IC-7100 lacks an antenna tuner, a real-time band scope and only offers a black & white touch screen. Of course this accounts for much (but not all) of the price difference. Another chunk of the price difference is likely product age. The IC-7100 has been on the market for a few years longer than the FT-991A, and Amateur Radio manufacturers tend to slowly drop the price of their radios as their competitors introduce equivalent products and demand starts to sag. Plus, I honestly believe that IC-7100 sales were (and are) unfairly hurt by the non-conventional form factor.

But there's more to the comparison of these two radios than just the basic feature set. The big questions is, how do they work in the real world? Is one better than the other for my specific needs? From this perspective the answer is, both are good, neither is perfect, but one comes out the winner.

Before we move on I have to say that as basic ham radio both are very, very good. If all you need is a box that lets you speak and hear, either of these will do admirably.

Now lets fashion a scenario that fits the theme of this blog. I spend about 60% of my radio time on digital modes - usually one of three modes; Winlink, JS8CALL and MARS using the MS-DMT modem package. The other 40% of the time I spend on formal voice nets. I may play in a contest or two throughout the year, but my real focus these days is emergency communications. For the EMCOMM role I already have an excellent station radio - a MARS modified Icom IC-7300. What I need is a radio that can serve as a main rig back-up AND is fully functional in a deployed, or portable, mode. Having VHF and UHF on-board is desirable, but not absolutely essential.

When operating portable my main scenario, the one that I focus on, is emergency communications. Yes, yes, yes, that's a thinly veiled excuse to go to a park and 'play radio', but I'm serious about getting the mix of radio, antenna, power source, computer, and software right to support a real-world emergency communications scenario. Given that, there are enough small differences between the FT-991A and the IC-7100 that actually allow a winner to emerge. It all comes down to ease of use and some seemingly minor feature differences between radios. 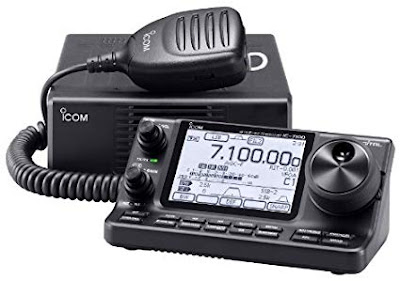 I've discussed the IC-7100 in the not-too-distant past, so I'll just say that in overall feature set and implementation the IC-7100 is the clear winner. While the FT-991A is no slouch, the IC-7100 races ahead with some characteristics that stand out when talking about emergency communications support in Georgia.


However, it's not a perfect world. The IC-7100's display can best be described as 'adequate'. It's not the lack of snazzy color options that's the problem. It's the relatively low resolution of the dot matrix display. What could have been a crisp, clear character set with just a slight bump up in pixel count is instead rendered like the poorly formed characters on an old Atari game console. Space Invaders anyone? If Icom could do one thing to improve this radio it would be to incorporate a higher resolution display.

How about the lack of a real-time band scope? I have to admit, the band scope feature on the FT-991A is slick, and useful. I do miss it on the IC-7100. The Icom does have a band 'sweep' function that gives you a snapshot of what's happening on the band, but it's not real time and it's relatively crude by comparison. Useful? Yes. As good as the FT-991A? No, it's not even close.

Is the lack of an internal tuner a real problem? While having a built-in tuner is a nice feature, my experience is that most tuners can only match 'almost resonant' antennas, say 3:1 or 4:1. In EMCOMM applications I might have to tune up some odd antenna installations and configurations, so I carry an external tuner anyway. I really don't miss an internal tuner.

Now, the second place finisher. Lost by a nose... 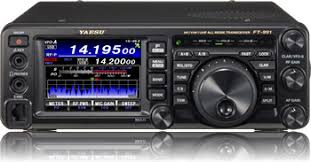 So what good things to I have to say about the FT-991A? Plenty.

The build quality is excellent. It's a tough, rugged and compact beast. Yaesu knows how to pack a lot of technology into small packages and it shows with this radio. Although the menu options are complex, once you learn the 'system' it's easy to navigate around. Once you conquer the labyrinthine digital mode settings the Yaesu works fine on digital modes. Just have your cheat sheet handy.

There's a lot of controversy on the web about how Yaesu 'hybridized' the touch screen display. I think the criticism is overblown. The digital display, while not super high resolution, is more than adequate enough to convey all the critical info in one glance, and the integration between the touchscreen and the manual buttons and knobs is well thought out.

And last, I've gotten more unsolicited "your audio's great" reports with the FT-991A than I have with any other radio. Yaesu knows SSB audio, and it shows.

Both radios will stay in my stable for the foreseeable future. But if a CAT 5 hurricane swept across south Georgia tomorrow and I was asked to deploy, it would be the IC-7100 that gets tossed in the truck.