A few weeks ago we lost my father, James P. Haren. While at 91 his death was not unexpected, it did come suddenly, and his close family and friends are still mourning his loss.

As my sister and I were going through his few remaining belongings I spied a dusty old portable radio sitting on his closet shelf, and I told her, "I want that". 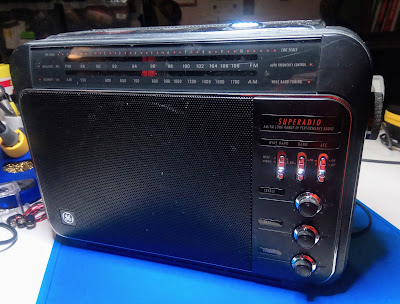 The radio is just an old GE SuperRadio, but to me it represents something special about Dad. Born in 1929, he grew up during the heyday of broadcast radio. Dad had no interest in Amateur Radio that I am aware of. He was a chemical engineer by trade and generally good with mechanical things, but I don't think he had much interest in electronics beyond being fascinated by consumer gadgets. Dad was a great one for gadgets.

But to the end, Dad loved listening to radio. I think it's because radio was closely associated with the milestone markers of his young life. It makes sense - he would have grown up listening to the classic radio shows of the era that were designed to capture the imaginations of millions of young boys. Shows like Dick Tracy, Death Valley Days, and Jack Armstrong, All American. He also came of age in the era when radio delivered the immediate news of all important national and world events - FDR's Fireside Chats and the nation's efforts to claw its way out of the Great Depression, the rise of fascism in Italy and Germany, the Japanese brutality in Manchuria, the Nazi invasions of Poland and France, the events of December 7th, 1941, and the long, hard struggle for victory in WWII. And that news would have been delivered by some of the great voices in early radio news reporting, like Richard Harkness, H. V. Kaltenborn, Lowell Thomas, Edward R. Murrow, and William L. Shirer. I can only imagine what it must have been like as a young boy, sitting on the floor of his parent's living room on cold, snowy winter nights in Buffalo N.Y., listening to world events unfold via the soft warm glow of a tube radio. Dad was not much for nostalgia, so his occasional stories of listening to the radio while growing up led me to believe that he marked the experiences as something special and important in his childhood.

Later in life the family home was never without a radio. While both my parents loved TV - Walter Cronkite informed us, and Ed Sullivan entertained us - a radio was always close by. At some point Dad became fascinated with shortwave. This was triggered, I believe, by the gift of an old 1950's-era Grundig table-top receiver, presented to him by a close friend who was a German ex-pat. This great old radio (which I now own) has the dial marked out not just with frequencies, but also with locations. It hearkens back to the days when shortwave broadcasts were identified by the cities they originated from - 'Moscow', 'Berlin', 'London', 'New York', 'San Francisco', 'Tokyo'. In my mind's eye I can still see Dad laying on the floor of our family room in Ohio, fiddling with the tuning dial, trying to bring in the latest broadcast from the BBC World Service. He would have been around 50 years old at the time, but he was still just a little boy in his parent's living room, captivated by world events delivered through that magic glowing box.

But time and technology marches on and, ultimately, the transistor prevailed. There was always at least one portable AM/FM radio sitting on the kitchen counter. We lived in northwestern Ohio, just south of Toledo, and the radios seemed permanently parked on the frequency for WJR out of Detroit ('The Great Voice Of The Great Lakes'). That's how the familiar voice of WJR's longtime host J.P. McCarthy became one of my listening milestones. It seemed no matter where I was during my long Army career, coming home to Ohio meant tuning in to AM 760 and the familiar sound of J.P. McCarthy (and later, Paul W. Smith).

Dad was pretty agnostic in his choice of radios. Like I said, he was a gadget guy and he loved fiddling with technology. I remember seeing a Panasonic or two occupying that kitchen counter space, along with a Toshiba, and even a series of wind-up emergency radios (again, that 'gadget' thing). But eventually he settled on the GE SuperRadio series. He went through a couple of them, and the one I grabbed out of his closet is probably at least 15 years old. But it still works great, and it's still parked on AM 760. Looking at it triggers my own flood of radio memories. And so the cycle continues.