Aaaarrrgggghhh! The battery on my Surface Pro 7 is giving up the ghost. Yesterday during a conference the screen started to flicker slightly and I noticed the battery level was dropping at a rate faster than I'd seen before. I knew it was inevitable, and I've been seeing indications of declining battery capacity for a few months now. 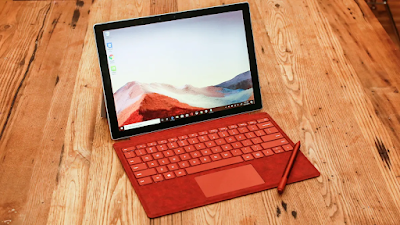 This is a work tablet, so I didn't pay for it. It's served as my office laptop for several years and I've come to really appreciate the Surface tablet form factor. I retire in less than a year, so I'm likely stuck with finding a replacement on my own (nothing provided by employer largesse). I've got several personal laptops that can fill the gap, but what I really like about the Surface line is the ability to outboard video to a dual monitor setup using the Surface docking station. My question now is, do I invest in a closed hardware solution? Surface Pros can not be opened up for a battery replacement. Microsoft wants you to toss it and buy a new one. Planned obsolescence. I'm thinking that any new laptops or tablets I buy for field use in Amateur Radio will have replaceable batteries.
I've got a very good Dell 5414 rugged laptop that I bought used about 4 years ago. It's my ham radio field laptop. It's got an i5 processor, 16 gb of RAM and a 128 gb SSD. It's a workhorse, and even four years on is still a very viable computer. It's only real drawback is that it'll eat a battery in about a year. But that's OK, because the design of this laptop means I can open the battery bay door and slide in a new battery. No dying battery angst. 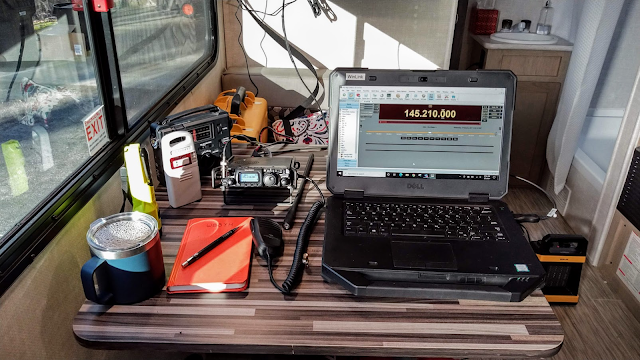 My experience is that the ability to easily replace batteries extends the service life of a laptop or tablet for at least a year. After three years most mobile device batteries start to show a serious decline in capacity; it's just the nature of the technology. Users find themselves plugging in their laptop or tablet more frequently to 'top it off', and very quickly the device turns into a small format desktop computer, permanently tethered to a power supply. A replaceable battery restores the functionality of the device - it gives your laptop or tablet a new lease on life. The vast majority of laptops and tablets, particularly laptops, are still very viable computing devices when they get tossed into the electronics recycling bin. The only reason they are there is because the batteries died.
Replaceable batteries also makes the concept of the fully off-grid computer possible. My expectation for a field computer is that I get at least 6 hours of laptop use with a 10% reserve. If that means I've got to swap out batteries in that 6 hour period, so be it. The design of laptops like the Dell 5412 (and its successors) means this 6 hour requirement is easy to achieve, and even exceed.
Of course all computers and tablets have limited lifespans. At some point my Dell will be orphaned by Microsoft (I already know I can't install Windows 11 on it), replacement batteries will become impossible to find, or I'll have a hardware failure. But considering that this is a 4 year old laptop that still has more than adequate processing power for today's routine tasks, and that I've been able to do two battery replacements on it for a small fraction of the cost of a new laptop, I'd say my plan to buy future devices only if they take replaceable batteries is a sound one.
W8BYH out
Posted by Brian at 7:43 AM

Email ThisBlogThis!Share to TwitterShare to FacebookShare to Pinterest
Labels: computer