Several Amateur Radio friends and I have been discussing the current state of radio availability from the Big Three (Icom, Yaesu and Kenwood). The topic gives us something to talk about as we scoot around the south metro Atlanta region, yakking thru the local repeaters.

The discussion is driven by the steadily shrinking pool of radios available from the Big Three. Most recently, Icom took its IC-7100 out of production. For the first time in decades, Icom has no all-band/all-mode 100 watt mobile radio in their lineup. Yaesu hasn't had one since they killed off the FT-857 almost five years ago. Kenwood? Nothing, but this is a space they never seriously played in. This means the market is ripe for new products in this niche; the first manufacturer to release something will literally own the market for as long as it takes the others to catch up.

However, I'm of a different mind. I've always been a fan of the all-in-one mid-power range HF rig concept, something similar to the old SGC-2020. This radio was developed as a low/mid-range wattage field radio - specifically designed to be taken to the field and run off of batteries. It was a POTA/SOTA rig long before there was POTA or SOTA. 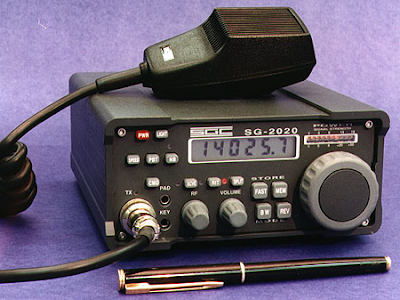 What set the SGC apart from the QRP radios it overlapped with in the market, like the Icom IC-703 or the Yaesu FT-817, is its rated power output - 20 watts. Most HF rigs designed for field use over the past 25 years top out at 5 or 10 watts output. The SGC set itself apart by offering 20 watts of output. While the SGC-2020 was plagued with performance and QC issues throughout it's production life, it was still a strong seller because it sat alone in the field radio market space due to its 20 watt output. Many will argue that there's little real world difference between 10 watts and 20 watts - only about 3 db. But that 3 db can make a real difference under marginal conditions.

We're almost a quarter century on from the introduction of the SGC-2020, and nothing has been released that I can find that fits this 'in-between' field radio power space - something more than 10 watts but less than 100 and offers design features that make it an ideal field radio - things like low current draw, an integrated tuner, integrated battery, and a rugged design that offers basic protection from the elements.

I say that now is an ideal time for one of the Big Three to design and release a 20 - 25 watt rig specifically designed for off-grid portable field use. We're seeing convergences in technologies that offer incredible possibilities:

The icing on the cake is that we're in a solar cycle upswing. Over the next five years it'll get easier and easier to make long distance contacts with less and less output power. 25 watts will be the new 100 watts in terms contact reliability.
So here's my wish list. Icom, Yaesu and Kenwood, take notes. Elecraft too if you're looking for new product possibilities:
If you say I'm asking too much, I'll say there are a few radios on the market that already come very close. None of them approach the 25 watt power level or IP rating, but in almost all other ways meet what I've laid out on this list. The IC-705 and the Elecraft KX2 are the two best examples. When you get a chance, hold an IC-705 in your hands and ask yourself what it would take for Icom to bump up the power output, add an internal tuner and a larger battery pack, and do a little more work to have it earn an IP-52 rating. The answer is, not much. And if you think it's impossible to squeeze that much capability into a small package, find someone who has a KX2 and hold it in your hand (you'll only need one, it's so small). Consider that six years ago Elecraft managed to squeeze a high performance SDR transceiver, a world class internal tuner and an internal battery that provides hours of operation on 10 watts into that small box. You'll then understand that what I'm asking for isn't really pushing the envelope on radio design, it's merely integrating existing technologies into a new form factor.

So, Icom, Yaesu and Kenwood (and Elecraft), let's not blow this golden opportunity. Get to work. I expect something from at least one of you by Christmas.