It's been a quiet week in the shack. Work, home repairs, and other non-geeky stuff have kept me otherwise occupied.

A few days ago I took our 2016 Hyundai Santa Fe in for its annual emissions inspection. The damned thing failed. It's a simple issue to address - a leaking gas cap ($15 at AutoZone), but lately this little car has become a bit of a maintenance headache. We recently had to have the speed sensors replaced in both rear wheels, to the tune of about $700. This on a car with only 34,500 original miles (yes, it's driven by the proverbial little old lady schoolteacher who only drives it back and forth to school about 2 miles a day). So this gets me thinking about complexity, and the necessity of complexity. For a 2016 model, this Hyundai has just about every bell and whistle available from the factory. It's the little old lady schoolteacher's car, and that's the way she wanted it. But I'm guessing we still have not figured out about 20% of the overly complex features in the thing. By comparison, I drive a 10 year old F-150 with very few bells and whistles. It's got over 110,000 miles on it, and other than tires and oil changes I haven't had a lick of problem with it. It's just a simple, reliable beast.

The price of complexity is necessarily higher failure rates, unless you have a development and quality control budget the size of NASA's. Hyundai actually does a very good job building cars with very high reliability rates - they've learned how to design reliability into a system. But at some point the complexity of a device, time, and continued use will catch up.

Which has me thinking of this:

In comparison to this:

The simple Ford vs. the complex Hyundai. Which will still be running in 20 years?

OK, moving on. As I posted on Facebook a few days ago, even Extra-class operators can be extra dumb. I went to one of my favorite parks earlier in the week to play around with my KX2, and forgot the coax! I was going to put up either my Par End-Fedz trail friendly antenna, or use my Chameleon whip, but all I had along was a short 4' long section of BNC jumper cable. This restricted me to using just the AX1 antenna. This little antenna actually hears very good on 20 & 40 meters, but I was only able to make one contact. But this one contact was a good one - WW2BSA in Stanhope, NJ. 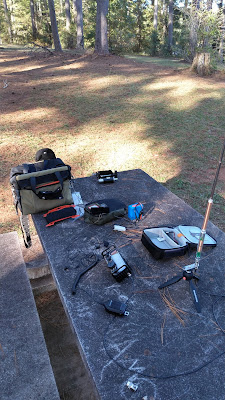 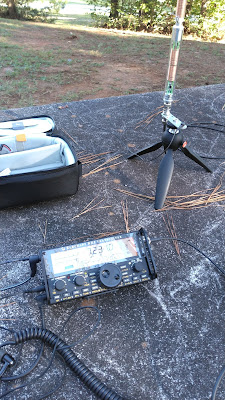 Next, I'm testing a new portable operations computer option. Currently I use a ruggedized tablet as one of my two shack computers, and take it portable whenever I want to do digital operations in the field, which is about all the time. But this tablet, while very capable, is heavy and chunky like all ruggedized tablets. So I got my hands on a used Microsoft Surface Go 2, an early 2019 model with the anemic Intel Pentium 4415Y CPU. What the hell was Microsoft thinking when they picked this processor?! 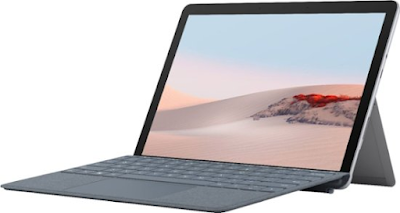 Processor aside, it's a pretty good piece of kit. My goal is to stress-test it to see if it might serve as a good, lightweight portable field computer. I had no trouble lashing it up with the Icom RS-BA1 software and driving the IC-705 with it. Next up, trying to get the KX2 working on digital modes like Winlink, and of course getting Ham Radio Deluxe running on it. The Surface Go does have several key advantages for portable operations. It can be charged via the USB C connector using a standard smartphone charger - no proprietary tablet charger needed. It has a back-lit type cover (very useful for night operations), it has a very good screen, and of course it's small and lightweight. It's not at all rugged, or weather resistant. In fact, if you look at the teardown videos on YouTube it's actually somewhat cheaply made compared to it's full-up Microsoft Surface siblings. I figure if I go this route I'll be able to get perhaps two years of useful service out of it before having to find a suitable replacement.

Later this afternoon I'll be heading out to participate in our club's monthly VHF simplex net. I'll be testing the Yaesu FT-2980R for the first time. I think I'll use it in conjunction with my Arrow Antenna open-stub J-pole. The combo should work pretty good. As long as I remember the coax...

To wrap this up, I did manage to get one blog post out this week - my favorite ham radio bloggers. That was actually a tough one to write, because the list of bloggers I think do a good job is at least twice as long as what I discussed. But I had to pick favorites and keep the post a reasonable length. I'm already thinking of a follow-up post - second round draft picks, so to speak.

That's all for this week. Stay tuned!