The Worst Book You Need To Read

This is very much an 'anti-woke' post, so if you are offended by concepts like personal responsibility, the death penalty, useless degrees and ugly truths, then do us both a favor and move on...

A friend of mine, fellow ham, and something of a medical expert (a real one, not a self-appointed one) has been recommending the book One Second After for over a year now. So recently I had some holes in my Kindle reading list and decided it was time to give this a read.

I'm of two minds on this novel. On one hand, it covers a lot of critical topics related to a total collapse of society due to something like an electromagnetic pulse (EPM). On the other hand, it's poorly written and can be a tough slog (more on this at the end). 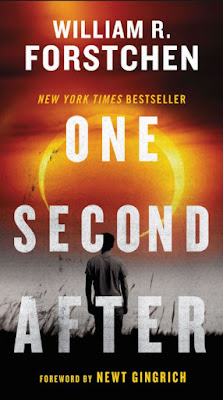 The author, William Forstchen, clearly has a strong grasp of the issues related to an EMP event. Forstchen uses the (somewhat likely) nuclear weapon scenario - North Koreans and mad mullahs cooperating to pop air-burst nukes across the US. The same thing can happen if the Sun belches out a Carrington Event-level coronal mass ejection (CME) (less likely in the short term, but inevitable in the long term). One of the things I like is that Forstchen almost completely avoids the silly survivalist fanboy stuff - which rifle or caliber is best, which knife blade shape or handle material is best, which lean-to shelter design is best, etc. Instead, he focuses on the immediate and long term impacts on society. When national, state and even county-level government is incapacitated or wiped out, how do small isolated cities and municipalities manage issues like establishing a functioning government, selecting leaders, prioritizing resources, providing services, enforcing laws and establishing a common defense.

The decisions quickly become pretty basic, and brutal. How do you manage a shrinking supply of food and medicine? How do you ration medical care? What do you do with hardened criminals when they can neither be jailed, banished, or effectively rehabilitated? Do you establish and carry out a death penalty for crimes that used to just get people locked up, but now are a direct threat to the survival of a small society (stealing food or medical supplies, sabotaging key infrastructure like water purification systems, etc.). In this situation, morality gets re-defined, and communities will be grasping for ideas and rules around which they can build a functioning moral and legal center. When the nukes go off, all fluff and pretense is stripped away. No 'wokeness', no ambulance chasing lawyers threatening to sue, no freeloading. You step up and contribute in real ways, or you die.

The book is a novel, and Forstchen sets the story in a semi-rural town in North Carolina. The town is small and isolated enough that everybody knows everybody, but not so isolated that outside influences don't come into play. This sets up a very plausible scenario of a small town forced to fend for itself with only the resources it has on hand, and ultimately having to make hard choices about how to deal with external threats, from relatively innocent refugees just looking for food and water, to roving bands of criminals intent on raping and pillaging as they move from town-to-town.

Let me put this out there for the Amateur Radio audience - there's virtually no discussion in this book of ham radio beyond a passing reference about checking to see if some unnamed ham radio operators still have working equipment. Like I said, this book focuses mainly on the larger societal impacts of an EMP event, not the nuts and bolts of survival. Does Amateur Radio have a role in this scenario? Yes, but only if modern, sensitive radio gear survives. This implies foreknowledge of the attack or event, and the ability to shield equipment from the EMP pulse. We'll likely have a day or two of warning if it's a CME. An attack by hostile actors will come with no advanced notice. Your spiffy new SDR radio is just as EMP-proof as your iPhone, which means it'll be toast.

As I mentioned above, the author clearly has a firm grasp on the overall impacts of an EMP event (he's even testified before Congress on the subject). A post-EMP world will be a grim place. There will be no electric power - the power grid will be fried. Literally fried. Everything electronic will be gone - either destroyed in the initial high energy pulse, or incapacitated by the lack of electricity. That's not just your laptop and smartphone. Your cars won't start. You won't be able to get to your bank accounts. All of your electronic appliances will be destroyed, and this includes any medical devices you depend on. The electronic controls that manage things like the water purification systems in your municipal water supply won't work. There'll be no 911 dispatch. No police response. No fire response. No EMS response. Fresh, refrigerated and frozen food will spoil within days. There'll be no lights. When the sun goes down, darkness will overtake everything, and predators - human and animal - will rule the night.

From a human behavior perspective, it'll be a world turned upside down. The best and worst in people will quickly emerge. This is when the true leaders will rise to the surface - people who know how to motivate others, manage resources, set goals, organize effort, set the example, and make the right decisions regardless of how tough they are. These will be mostly ex-military (mainly officers and non-commissioned officers), law enforcement and emergency services personnel. It's also when we'll see the value of the people who keep our infrastructure up and operating - electricians, carpenters, mechanics, plumbers. Medical personnel, particularly doctors, nurses and PAs with strong backgrounds in emergency medicine, general medicine and public health will be worth their weight in gold. Sadly, they'll be working with quickly dwindling stocks of medicines and other supplies, and they'll soon be battling to control basic health issues like water and insect-borne diseases (dysentery, malaria, etc.), infections, malnutrition, and a whole host of 'third world' health problems.

Who else would be considered of value? If you learned a trade or got a degree in something useful like electrical or civil engineering, or served in the military and developed basic leadership and organizational skills, or know how to farm and raise livestock, you have something to contribute and should be OK. But let me be blunt here - if you never developed a work ethic, spent your days playing on-line games, or never thought beyond the next welfare check, you better be willing to learn fast and develop some needed skills, or you will be quickly turned out. And no, cooking meth is not a 'skill', and that women's studies degree you're hoping Bernie Sanders will help you pay off will be as useless as tits on a boar.

I also need to touch on something that Forstchen mostly ignores - the importance of faith, church communities and the clergy. Many people will immediately turn to their local pastors and their church community for guidance and support. In my opinion, clergy (I'm talking mainly about trained and ordained Christian and Jewish clergy here) will be absolutely essential. They will provide the moral guidance and the left and right boundaries needed as leaders struggle with the task of rebuilding a functioning society. In addition, many Protestant denominations like the Mormons, the Salvation Army and the Southern Baptists view disaster relief as an important ministry. They have the organization, training and supplies needed to provide at least short term relief in many communities.

If you think this is all just academic and nobody really knows what will happen, I've got news for you. This happens in small and limited scale almost every year. Think Hurricanes Katrina and Maria. Immediately after Katrina, people in the rural areas of lower Louisiana and Mississippi who did not evacuate, but had basic skills and emergency supplies, did OK. Not great, but OK. New Orleans, on the other hand, quickly descended into a lawless and chaotic cesspool. I'll leave it up to you to figure out why. The same thing played out in Puerto Rico after Hurricane Maria in 2017. We all heard the tales of woe coming from the major cities on the island, as the elected politicians (another useless skillset) pointed fingers at everyone but themselves. But in the rural areas of the island, in the small towns and villages that were used to frequent power outages and poor communications, the residents essentially did OK. The had the necessary supplies - generators, battery powered radios, flashlights, food, water, etc. They had also developed the mental toughness needed to see them through something like Maria.

Getting back to the book, while the author has a firm grasp on the aftereffects of an EMP or CME, he's no novelist. The book is readable, but Forstchen has no real experience in writing dialog, his characters are poorly formed, and he suffers from a bout of what I call 'Tom Clancyism'; all the good guys are heroic, all the bad guys are the lowest of the low. All former military are steely-eyed combat veterans who never make bad decisions. All law enforcement are highly competent, all politicians are crudballs (well, at least he got that right).

But the book is important because it makes you think. I urge you to read it and then spend some time considering your own situation. Do you have the skills, the basic supplies, the mental attitude and toughness it will take to survive the rebuilding of a society that has been set back 150 years?