The on-line magazine GPS World posted an article today that brought out the geek in me. The article titled GAO Report: 'Use resiliant tech vs. GPS as DOD primary PNT' discusses vulnerabilities in our GPS system and encourages development of autonomous solutions that are less vulnerable to jamming or unintentional interference. 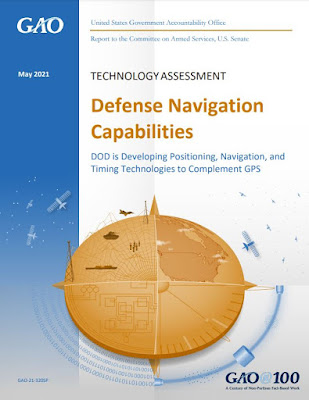 Here's the bottom line: our GPS signals, in fact all satellite navigation (GNSS) signals - the US GPS (Navstar), the EU's Galileo, the Russian GLONASS, the Chinese Beidou, and others like India's regional NavIC network - are relatively easy to jam. In fact, hostile actors like North Korea and Russia do it all the time. Yet dependency on GPS-based positioning, navigation and timing continues to grow within the DoD (and more exponentially, in the civilian world). And as dependency grows, vulnerabilities grow.

What does this mean for Amateur Radio? More and more radios are being designed with built-in GPS receivers. They've been in HTs for well over a decade (every DSTAR and C4FM HT, and most mobiles, now have integrated GPS). The GPS signals are used mainly to determine location - figuring out where you are so the radio can find nearby digital repeaters. But more and more HF radios are being built with integrated GPS receivers. There's a few reasons for this. For example, Icom's new IC-705 has a built-in GPS receiver that is there mainly to locate the radio for DSTAR functionality. But the GPS receiver signal can be out-boarded to a computer to support location based apps and synchronize the computer's clock with GPS time.

This functionality will become increasingly important as the ham radio community moves more and more to 'time sliced' digital modes like FT8 and Automatic Link Establishment (ALE). There is even talk about expanded use of frequency hopping, which is legal in the Amateur Radio Service as long as a public frequency hopping key is used. Frequency hopping is absolutely dependent on precise timing, and all radios in the frequency hopping network must use the same time base. The best source for that common time base is GPS.

[Geek segway here. So, how come GPS time is so accurate? Each US GPS satellite carries two atomic clocks, and those clocks are constantly monitored and adjusted by the GPS ground control stations. An extremely accurate time signal is continuously broadcast by every satellite, as part of the navigation signal. A GPS receiver can strip out that time signal and make it available for use by other applications. This is why there's a GPS receiver on every cell phone tower in the US. The tower doesn't care about the location signal - it knows were it is. What the receiver does is provide the very precise time signal needed to coordinate cell zone hand-over.]

What impact could GPS jamming have on Amateur Radio? Honestly, not much in the near term. We're still not dependent on extremely accurate time signals. The dependency is coming, but it's not here yet and likely won't be for years. Additionally, the risk of a hostile actor like the Chinese or North Koreans jamming GPS signals over the continental US is unlikely; such an act would be interpreted as an act of war, and as goofy as some of our enemies are I doubt any of them would be dumb enough (or are capable enough) to try something like this.

But large-scale Amateur Radio dependency on precise time coordination is coming, so we'll keep an eye on this. After all, it's not like I've got anything better to do with my time.