I love eBay. I buy a lot of stuff off of eBay. (Although strangely, I've never sold anything through eBay. Does that make me a hoarder?) I also often turn to eBay for some laughs. Lately the eBay thing that makes me laugh are the prices folks are asking - and sadly getting - for an AT-984 long wire antenna for the PRC-25 or 77.

In the early 60's the Army recognized the need to extend the range of the PRC-25 beyond the (optimistic) five or six kilometers the radio was capable of when using the long (3 meter) whip antenna. The simplest way turned out to be the most effective - wrap some wire around the threads on the AB-591 long whip antenna base, screw it into the radio, pay out 150' or so of wire and you can easily double the range of the radio. The use of the AB-591 base was key, because there's an extra long 'nub' on the end of the base. As it screws into the radio that 'nub' contacts a switch deep in the antenna mount, indicating to the radio that a longer, more resonant antenna is in use. The Army wasn't content with telling RTOs to just carry an extra 150' or so of wire. Noooo - they needed to come up with an approved, type classified antenna system. Their solution was actually pretty neat (and cheap) - get some inexpensive commercial fishing reels (it looks like the Army selected the Pflueger Medalist fly fishing reel) and paint them olive drab, wind about 150' of thin but tough phosphor bronze wire on them, provide a crimped-on spade plug at one end of the wire to slip between the antenna mount and the antenna body, stick some simple user instructions on the reel, put it in a small canvas bag and name it the AT-984/G antenna. It worked great! 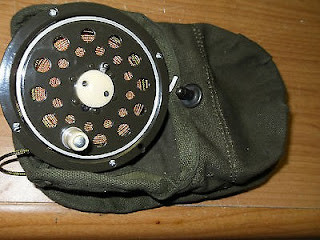 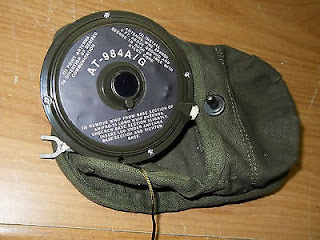 These things could not have cost Uncle Sam more than $15 each back in 1968. By all reports they were widely issued, so they were not rarities. But since they were not repairable I'm guessing a lot were broken or lost during combat and just written off. Surprisingly, I never saw one in the flesh in my 23 years in the Army (starting back in 1979), but I do remember seeing them in component listings for the PRC-77 radios. Our own field expedient manuals told us to just use a single 150' strand of WD-1 commo wire. A simple and effective substitution.

But I'm a military radio collector and dammit, I want a real, gen-u-ine AT-984 antenna for my collection! So this started me on the quest for a good example of an AT-984. I was surprised to find that there's usually one or two for sale on eBay. Great! But after a few weeks of tracking auctions (or buy-it-now sales) for these things it became apparent that everyone who owns an AT-984 thinks it's rare and valuable enough to contribute significantly to their retirement account. A hundred bucks seems to be the median value for these things right now, with the lower priced 'buy-it-now' ones moving quickly, the higher priced ones hanging around a bit longer but eventually selling for the asking price or racking up quite a few bids on auction. And condition is no impediment to a sale - I've seen beat-to-snot examples that were missing pieces and all bent up like they had been run over by a jeep sell for just as much as pristine, still in the wrapper examples.

Here's one currently on offer on eBay with a bent frame. It's in otherwise OK shape, and seems to be complete, but $104 plus $13.50 shipping for a damaged item? I guess because someone wrote 'B-1-135' (Bravo Company, 1st Battalion, 135th Infantry? Armor? Aviation? Who knows) on it in red paint it's collectible. But remember, this is not an unusual sale - and by comparison with some of the others recently sold on eBay this one is in pristine shape.

So I wait and watch, ready to pounce whenever someone financially solvent enough decides to put an AT-984 up for sale at a reasonable price. Or the current sellers come to their senses.