With no official announcement from Icom, this week US distributors quietly began marking the Icom IC-7200 as 'discontinued' on their websites

This is a darned shame. The IC-7200 had something of a cult following; it was rugged, military like in it's design and it just looked cool. But it was no slouch - it offered great HF performance and incorporated a sound card interface that made using it on digital modes like PSK-31 or for Winlink a snap.

The IC-7200 was declared dead once before back in 2016, but a year later customer demand spurred Icom to put it back into production. One dealer, Gigaparts, capitalized on the radio's rugged appeal and offered the radio in several custom colors done up by an after-market paint shop. Some of the designs were a bit outlandish, but the 'Vietnam olive drab' option was an attention grabber. 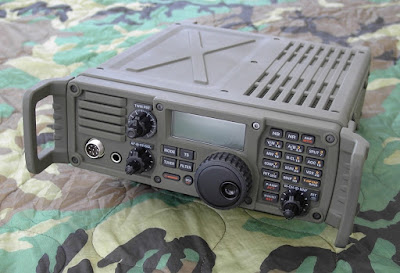 I've owned my IC-7200 for about a year and was so impressed with its performance and rugged build that I was planning to buy a second as a back-up. Alas, it looks like I'll be looking for a used one if I don't move fast.

I'm also scratching my head wondering just why Icom killed off this radio but keeps the very long in the tooth IC-718 in production. The IC-718 went into production almost 5 years before the IC-7200 first came to market. It's a good radio, and Icom has sold truckloads of them, but it's an archaic design by today's standards and other than a low(er) price and the Icom name badge it really doesn't offer any thing that would make it competitive. In fact it's direct competitor in the Yaesu lineup - the FT-450D is a much better radio. The IC-7200 could hold its own against the FT-450D, but not the IC-718.

My guess is that Icom figured out that the IC-7200's sales were eating into sales of the IC-7100 'shack in the box'. Just speculation. Or maybe Icom's got a nifty IC-7200 replacement waiting in the wings. Maybe a ruggedized manpack HF rig, 20 watts out, internal battery pack, takes a whip antenna for operations on 10 and 6 meters, fully integrated handset. Hey c'mon Icom, make Daddy happy!

But in the meantime my IC-7200 will soldier on. I recently had the MARS/CAP mod done on it and it gets dragged to the field now and again for some fun.

It's a workhorse for sure. I'm keeping mine.

Email ThisBlogThis!Share to TwitterShare to FacebookShare to Pinterest
Labels: hf