The radios I've been using in my truck for the past two years were either an Icom 880H or an Icom ID-440. Both are very good radios but I wanted improved capabilities. I wanted the ability to do cross-band repeat from my truck, I wanted a larger screen that presented more information, I wanted dual receive and I also wanted D-STAR. That narrows the choice down to just one radio - the Icom ID-5100. I've been using the ID-5100 for the past 6 months in my shack and I've come to appreciate it as one of the best dual band mobile radios on the market today. So I sold off a few things (these days in my house ham radio must be a zero sum gain) and picked up a second ID-5100. 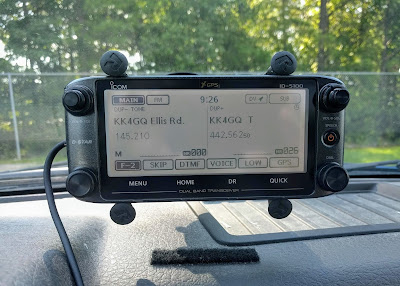 I also bit the bullet and bought a Ram X-grip mount for the radio head. If the F-150 has a drawback it's that the dashboard provides zero clean, smooth and level spaces for mounting accessories. Shame on you Ford. Not everything must be an exercise in eclectic styling and swoopy angles. It's a truck, fer' christ sake. The X-grip mount has a big suction cup that, so far, is sticking tenaciously to my windshield with the ID-5100 control head attached. I wouldn't take it off-roading, but for normal road travel it seems to work just fine.

The antenna remains the same old tried-and-true Comet SBB-5 on a mag mount stuck in the middle of the truck roof. I've used this antenna for more years than I can count on a variety of vehicles and recommend it highly. It's a single piece of stainless steel and it presents a reasonable SWR on both 2 meters and 70 centimeters. When you get it mounted it'll require a little tweaking with a tuner to get it optimized, but once you do that you can pretty much forget about it for the next decade or so. With the matching Comet mag mount base this antenna stays in place even when cruising at 85 mph up Interstate 75 (don't ask me how I know...).

One of the big things I like about the ID-5100 is how Icom implemented cross-band repeat. I've got other mobile units that can do cross-band, but getting to the cross band feature set requires some funky button pushing and a fair amount of biting your tongue. With the ID-5100 cross-band repeat is just a few taps away from the main screen and everything is clearly indicated on the display. Another great 'sneaky-pete' feature of the ID-5100 is that once you have all the settings in place you can disconnect the remote head and hide it away in your vehicle - the base unit will continue to operate. So I can be roaming a local park with a low power UHF hand-held and work my local VHF repeater on cross-band repeat with the radio completely hidden from view.


But it's not just cross-band repeat and D-STAR that make this radio great. As I type this I'm listening live to the Atlanta Radio Club radio traffic supporting the annual Peachtree Road Race in Atlanta. The repeater, W4DOC, is located in downtown Atlanta is right on the edge of my ability to receive signals from its location. Although race radio traffic is barely registering 1 or 2 bars on the ID-5100, received audio is excellent. If I didn't know better based on the radio's display I'd say I was hearing net control at full strength and full quieting. The receiver in this radio is outstanding.

So the UHF/VHF comms upgrade is done. What's next? Maybe a prefabricated HF operating position for the back of the truck. But first, I gotta' go get the ribs done for the 4th of July dinner.


*Combat Engineer Vehicle (CEV) - I used to be a combat engineer. The CEV was a true 'MacGyver' piece of gear used by combat engineer units in the US Army. It was a 'do-all' vehicle based on the M60 tank that sported plow, a crane and a 165mm demolition gun. In short, the perfect commuting vehicle for Atlanta traffic. Sadly, my wife won't let me have one, so I have to make do.