Word dropped yesterday that the venerable FT-818 was taken out of production by Yaesu. As of this morning Gigaparts does not list the radio at all on their website, and HRO shows it either out-of-stock or low stock at all of its stores. 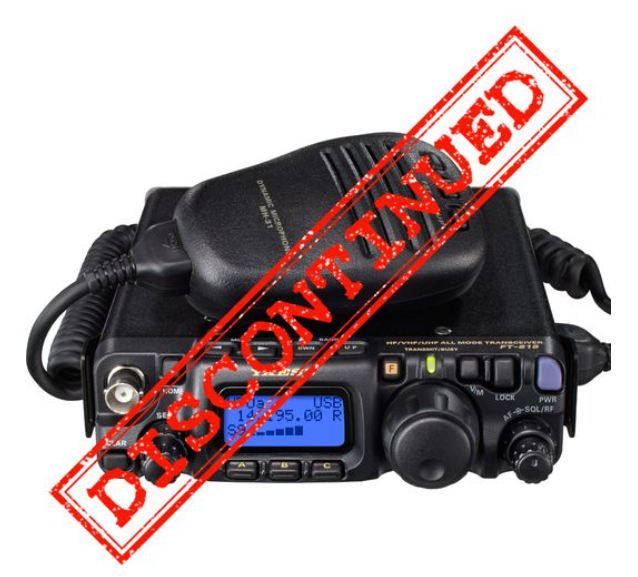 I've written extensively about this little radio on this blog and on various Facebook sites. I consider it the last of the 'good' generation of Yaesu radios, along with its sister rigs - the FT-897 and the FT-857. The FT-818 had a 20+ year production run, perhaps the longest of any Amateur Radio (although I think the Icom IC-718 may be giving it a run for its money). In the end it was killed off by the one thing no electronics system can escape - parts availability. According to Yaesu they couldn't source many of the components needed to build this radio. Of course they could have re-designed the rig to take advantage of components that are available in the market. A lot radio manufacturers have had to do this - including Icom and Elecraft. My guess is that Yaesu gave it some thought but realized that, given the age and design of the radio, it was just time to let the old girl go and work on bringing something new to market. At least I hope that's what Yaesu was thinking. Yaesu is being very cagey about what might be coming. I'll say this though - throughout the pandemic and chip shortages, Yaesu has been the one Amateur Radio manufacturer that hasn't been shy about bringing new products to market. Some have been minor refreshes like the FT-5DR handheld, some have been new development products like the FT-710. But while all the other manufacturers have been sitting on their hands waiting for things to shake out, Yaesu has pushed ahead. To me this indicates that Yaesu is likely to already have a replacement for the FT-818 waiting in the wings.

In an earlier post I mentioned that in 50 years there'll be more FT-817/818 rigs still on the air than  Icom IC-705s, and I truly believe that. Given the sheer number of 817/818 radios out there, and the fact that the 20 year old design is easier to maintain than an SDR, I'll wager that in 2101, the 100th anniversary of the FT-817s introduction, there'll be special event stations dedicated to firing up these great old rigs and getting them on the air. By that time the IC-705's will all be recycled electronic waste.

So raise a glass to the old gal, the radio that defined the QRP shack-in-the-box concept and helped  launch the SOTA movement. And if you have one, make sure she gets on the air every now and then.

Email ThisBlogThis!Share to TwitterShare to FacebookShare to Pinterest
Labels: yaesu