You Can Go Home Again

I found out yesterday that you can go home again, at least in Amateur Radio.

Yesterday as I was leaving the Stone Mountain Hamfest in Lawrenceville, GA I made one last sweep through the boneyard and stopped to talk with David, AG4F. David looked like he was trying to unload the worlds largest collection of 32-bit computer parts, and reported he actually had some measure of success. Seems there's a buyer for EVERYTHING at a hamfest!

At the table next to David's I noticed the seller had two nice looking Radio Shack HTX-202 2-meter HTs for sale. One was in the box, with all accessories still in the unopened packaging. The only thing missing was the Ni-Cad battery pack, but that's to be expected for a radio that went out of production 20 years ago. The package did include the AA cell battery holder so I knew I could at least power it up and use it portable. We haggled a bit and I walked off with a part of my Amateur Radio past.

The HTX-202 was my first Amateur Radio transceiver. I bought it in 1995 after being licensed at Fort Hood, TX and assigned the callsign KC5YNP. The radio was an expensive purchase back then - something like $200. But the HTX-202 had a great reputation and, perhaps most important, the local Radio Shack store in Killeen, TX sold a lot of ham radio gear and did a great job of supporting the local Amateur Radio community so I figured it was a safe purchase.

But my experience shows the importance of mentoring (or 'elmering' as it's called in the ham radio world). I struggled with the radio for a few weeks and couldn't bring up most of the repeaters in the Fort Hood area. I ended up taking it back to the Radio Shack store and had them ship it off to the repair facility in Fort Worth. To say I was peeved that Radio Shack had sold me a defective radio would be an understatement. A week later the store called and told me my radio was back from Fort Worth and ready to be picked up. I dropped by the store after work and when the sales guy handed it back to me he said, "They didn't find anything wrong with it"

I fired the radio up right there in the store and tried to hit one of the local Killeen repeaters. No luck. I gave the sales guy a stern look. "It sure doesn't look to me like this thing works!"

"Have you set the PL tones?" he asked.

I got a quick block of instruction (that 'elmering' thing again) and thirty minutes later I walked out of the store embarrassed as hell but with all the PL tones for every repeater between Dallas and Houston loaded in the radio.

That HTX-202 ended up doing yeoman work. I took it with me on field exercises on Fort Hood and allowed my Soldiers to use it to make phone patch calls home. It rode in the car with me everywhere, becoming my 'mobile' rig. I even took it to Six Flags Over Texas, and got the 'you're an embarrassment' look from the YL when I pulled it out of my backpack just before getting on the Yogi Bear ride. I eventually put up an MFJ ground plane antenna in my back yard and bought a used 35 watt amplifier. From my house on Fort Hood I could bring up repeaters in Austin, a good 60 miles away. When all you can afford is one radio, you make do.

One memorable day in May, 1997 my wife and I stood in our back yard at Fort Hood and watched an unbelievably ugly storm system pass just to our east. Weather systems don't usually scare me, but this one did. I told my wife to get the kids inside, and I rushed in to fire up the HTX-202. Just 20 miles south of us that storm system dropped an F5 tornado on the ground that literally wiped the small town of Jarrell off the map. If you were not under ground when the tornado hit you were dead. Period. I listened in morbid fascination as repeaters from Waco to San Marcos lit up with tornado and storm damage reports, weather warnings and calls for assistance. I was hooked. That little radio was my window into things well beyond my line of sight.

Later in 1997 we moved to Germany and the HTX-202 went into storage. In 2000 we found ourselves back in the US, in Fayetteville GA. Soon after settling in I pulled out the HTX-202, found a few local repeater frequencies and got back on the air. I'm still on the air, on the same repeaters, almost daily.

Somewhere along the way the old HTX-202 became just an obsolete piece of gear, and I sold it off to a local ham who wanted to run a packet station with it. Well, packet is dead, and I'm sure that old radio is too. I soon came to regret getting rid of the HTX-202; it was my 'first love' in ham radio and it taught me a lot. I always told myself that one day I'd find a replacement and bring it home, for nostalgia reasons. Well yesterday was that day.

The radio works, but returns an 'Er1' code, which means the internal memory battery is dead (dead, dead, dead...). But that's an easy fix, and a replacement battery is already on the way from Amazon. I did manage to get a local repeater frequency and tone loaded and confirmed the radio does work (just don't turn it off or all the memories get wiped - the dead battery thing). 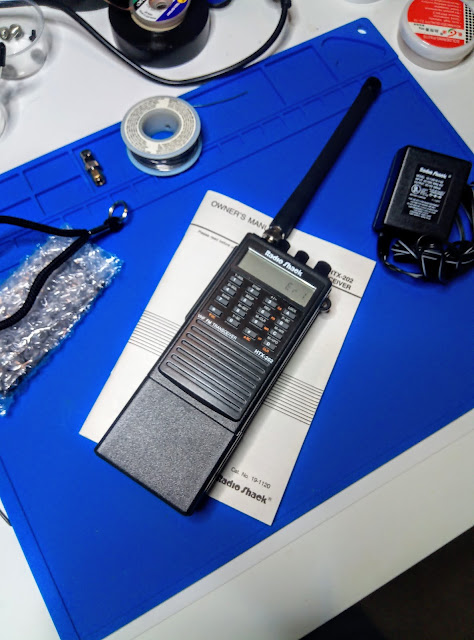 So I'm tickled pink to have my first radio back. It'll assume an honored place among my collection of handheld radios and, who knows, maybe I'll fire it up sometime try to make a phone patch - for old times sake.