For the past two years or so I've been using a vertical HF antenna set manufactured by Chameleon Antenna out of Sparks, Nevada. Chameleon is known for producing well made portable antennas and components and the customer service is outstanding.

The HF antenna I use isn't a single product. Chameleon sells a variety of components that you can use to build an antenna 'system', and what I've cobbled together consists of the the Chameleon Hybrid base - a 5:1 matching transformer - and two vertical whip sections. I normally use a jaw clamp to secure the antenna to a tripod supported mast. This arrangement requires counterpoise wires, and I run three or four counterpoises set out between 40 & 60 feet to help tuning on the lower bands. Chameleon is honest in its literature by stating that most antenna setups will require a tuner or matching unit, but the 5:1 matching transformer should provide a low enough VSWR on all bands that your tuner should have no trouble finding a match. I also find it helpful to place a common mode choke right at the feedpoint to help tame the SWR.

When clamped to the tripod mast and hoisted 8' or so in the air the antenna is a great performer. Chameleon will tell you that with a vertical antenna, height is everything, so the higher you get it in the air the better the performance. As long as the bands cooperate I've had no trouble making contacts all over the eastern US and into the Caribbean. It's not a DX antenna, but for regional communications it works just fine.


Setup can take a little time, and if there's any wind the antenna needs to be guyed for support, but once it's up it is a great performer


Recently I was operating at a local park and broke my tripod center pole. This is simply an inexpensive painters pole that slides into the tripod center socket so I wasn't too upset. But I didn't have a spare so it left me without a way to stand up the antenna.

Then I remember that I had a Chameleon ground spike with me. The Chameleon spike is a simple stainless steel spike with a socket threaded to accept the standard 3/8 x 24 mounting bolts used on most portable ham radio antenna bases. The spike is designed specifically to support Chameleon's vertical antenna components but in reality can be used with just about any vertical antenna with a 3/8 x 24 base. 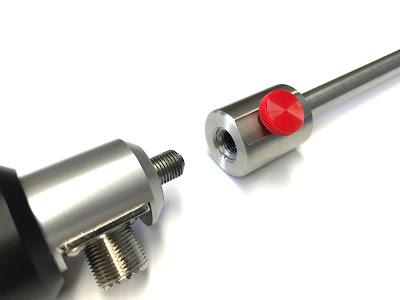 I had purchased the spike over a year ago, looked it over and tossed it into my antenna bag thinking it might come in handy one day. Well, that day had arrived. With a broken tripod there was no other way for me to support this vertical antenna. A few whacks with a mallet and the spike was in the ground. I screwed in the antenna sections, attached the counterpoises, hooked up the coax and hoped for the best.


I need not have worried - even in this era of lousy band conditions this setup got me in to NW Ohio and Maryland up near Baltimore on 40 meters. In fact, it was 'Ohio NVIS Test Day' and I was talking to folks around Columbus and Dayton on their NVIS setups with no problem - from well south of Atlanta.


I was also able to make connections to Winlink nodes on 40 meters up to 490 miles away. Overall I was quite pleased with the setup. Yes, I'm sure it would have performed better mounted to the tripod and hoisted up 8 feet or so, but you have to work with what you have, and this was all I had, and it worked!

Would I ever deliberately choose this ground spike setup over a tripod mounted setup? No, but it does provide a means to get on the air quickly. With practice I'm sure I could have this antenna combination set up and and on the air in under 10 minutes. If you are working an emergency communications scenario where you need to get a minimal communications capability on the air fast to buy time to set up a more robust antenna configuration, this spike/vertical combo is ideal.